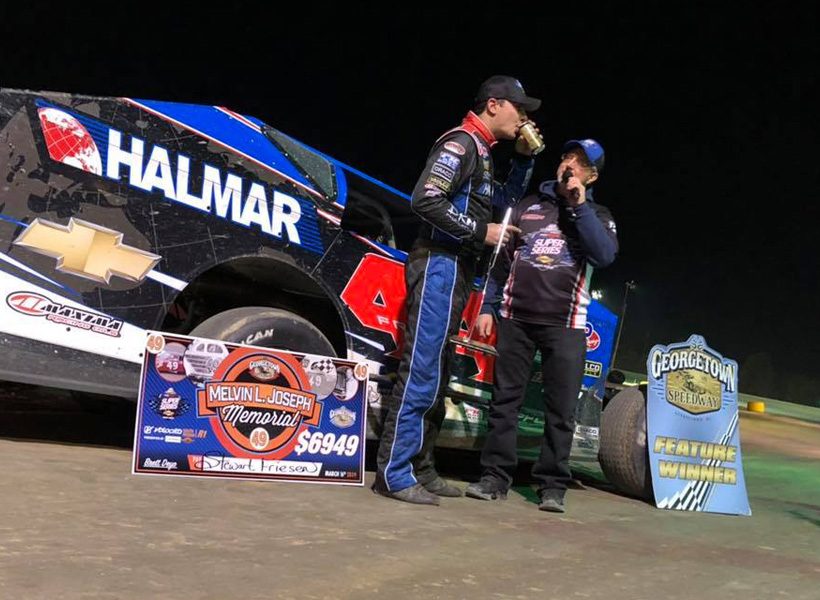 After an event-filled 49-lap main event, Stewart Friesen survived for a $6,949 payday.

Friesen, of Sprakers, N.Y., bested the 31-car field and a race of tire attrition to win the Melvin L. Joseph Memorial in front of a packed house at the Sussex County oval. Friesen edged rival Matt Sheppard to open the STSS Velocita-USA South Region with a Sunoco checkered flag.

With strong winds and bright sun, an abrasive track surface was in place for the opening round of the Velocita-USA South Region presented by Design for Vision and Sunglass Central.

Joseph Watson and Ryan Krachun started on the front row as New Jersey’s Krachun took the lead and had opened a sizable advantage over the rest of the field. However, after a yellow on lap eight, Krachun chose the outside, and Anthony Perrego, in his new Gary Simpson No. 12 STSS South Region ride, gladly took the bottom and took the top spot.

Drivers continued trying to make the top side work, and right around the halfway point, tires began deflating. Pole starter Watson brought out the yellow due to a flat tire; H.J. Bunting and Krachun both visited the pit area to change tires as well. One lap later, following another yellow, Billy Pauch (second), Stewart Friesen (sixth), and Ryan Godown (seventh) all went to the pit area on lap 25.

Things began to look like the ‘Blast at the Beach’ from last August with Anthony Perrego and Craig Von Dohren running first and second. However, they both fell victim to the flat tire wrath shortly after. By lap 29, all but six cars had been in the pits.

After Friesen’s tire change, he was able to pick spots off one-by-one, combined with overtaking drivers who went to the pit area.

By lap 30, Friesen’s Halmar International-backed DKM No. 44 was back to the lead.

“It’s a weird deal when it comes to a tire game like that,” Friesen said, reflecting on his ascent through traffic. “It wasn’t an artistic success, but we got the win and we will take it. I was definitely nervous about making it to the end.”

On lap 33, defending STSS Halmar International North Region driver Billy Decker flipped on the backstretch. At that point, STSS and Georgetown officials opted to offer teams the opportunity to refuel due to the amount of caution laps run.

Following the fuel stop, Matt Sheppard and Ryan Watt began to climb their way through the field, eventually getting to second and third, respectively, within the final five laps.

Sheppard and Watt chased Friesen across the line at the finish.

The win for Friesen was the 13th of his career with the Short Track Super Series.

“Stew is too good; he’s not going to mess up,” Sheppard said. “We threw everything at him that we could. We just ran out of tires.”

Sheppard had led the race at the lap-27 mark prior to giving it up due to a flat tire.

The defending winner of the Melvin L. Joseph Memorial race, Boyertown, Pa.’s Watt started 18th, climbed fifth, got a flat, and drove all the way back for a third-place finish.

“We got to third, I thought we had something for those two (Friesen and Sheppard), but we ran out of tires and I just had to hang on,” the Boyertown, Pa., driver said.

Billy Pauch Jr. of Frenchtown, N.J., nursed the Pascual Motorsports No. 3 to a fourth-place finish, edging Milford, Del.’s Jordan Watson, who recovered from his own tire misfortune to finish fifth in the family owned No. 1J.

Sheppard was the Beyea Custom Headers Fast Timer at a lap of 19.213 seconds.

Adam McAuliffe of Broadalbin, N.Y., put his name on the Georgetown Speedway win list, taking home the $1,490 top prize to open the six-race STSS Crate 602 Sportsman South Region. McAuliffe’s win came over a packed field of 53 Sportsman on hand for the opener.

The Crate 602 Sportsman feature had drama in its own right.

Pole starter Cole Stangle was sent back two after being called for jumping the start twice. Tighe Sherlock would inherit the lead and controlled most of the events.

Scott Hitchens, the all-time winningest 602 crate driver at Georgetown, quickly climbed from 10th to second and was pressuring Sherlock for the lead. All the meanwhile, Craig Whitmoyer, a Grandview (Pa.) Speedway regular, was making hay. After starting 19th, the man they call “Hook”, was working through the field and had gotten to third, right behind Sherlock and Hitchens.

Things all changed with five laps to go, as Scott Hitchens went to change a left-rear tire under yellow.

McAuliffe was the beneficiary as he shot through the top-five.

“I found out under one yellow the top was a little better, so I stuck with it,” McAuliffe said.

The Empire State driver made the trip down, and put on a show in the late race restarts, going to the top every time, and making passes every time. With three laps to go McAuliffe was third when the green flag dropped again. He went to the top, passed Whitmoyer and got under Sherlock. Sherlock got out of the groove off of four, and hit the outside wall hard, ending his story book night.

“I knew we’d be strong at the end,” McAuliffe.

The Delaware Super Trucks saw 15 vehicles take the green with Jerry Hill and Tim Quay on the front row. Matt Esham, who started 12th was making moves early and often. He climbed to second halfway, and was able to take advantage of the push the 69 of Jeremy Hill had. Hill and David Smith ended up making contact, giving Hill a flat tire and ending his chances at a win.

Esham held off the field to pick up his first career win.

A 17-car field of Modifieds and Late Models appeared for the Southern Delaware Vintage Stock Car feature event. Jamie Eicholz started on the outside of the front row, and showed the way, as the Late Models ended up with a strong advantage by the end.

The top-three were all Late Models, with Eicholz picking up the win, and Todd Miller finishing second. Miller started in 15th and ended up being the highest-finishing sportsman finisher in the feature.

Twelve Delmarva Chargers went at it hot and heavy for their 12-lap feature. By lap two, they were two by three nose to tail among the first five cars. Geoff Carey started and seventh and quickly threw his hat in the ring and entered the fray. He and the No. 51 of Jerry Barker began to run away from the field.

“I hope he’s not mad, I leaned on him a little bit,” Carey would say of his pass of Barker for the lead with four laps to go.

Ashley Merritt, meanwhile, would win a three wide battle to round out the top three.

GEORGETOWN NOTES: It was a big day for growing chassis builder DKM, sweeping the open-wheel portions of the event with Friesen in the STSS Modified and McAuliffe in the STSS Crate 602 Sportsman taking victories….

NASCAR Hall of Fame driver Bobby Allison was the Melvin L. Joseph Memorial Grand Marshall and signed autographs throughout the afternoon, while speaking to the crowd before the National Anthem. Allison rehashed memories of racing Joseph’s No. 49 and his affinity for Dover International Speedway built by Joseph….

The pit area was filled to overflow, literally, leading to the Delmarva Chargers and Delaware Super Trucks to be parked in the infield. The total car count was 143….

The two-day event concludes on Sunday with an event comprised of Small-Block Modifieds racing for $4,049 to win (30 laps) plus RUSH Late Models ($1,049 to win), Delmarva Chargers and Delaware Super Trucks.

All gates open at noon on Sunday. Hot laps hit the track at 2 p.m. with racing at 3 p.m.