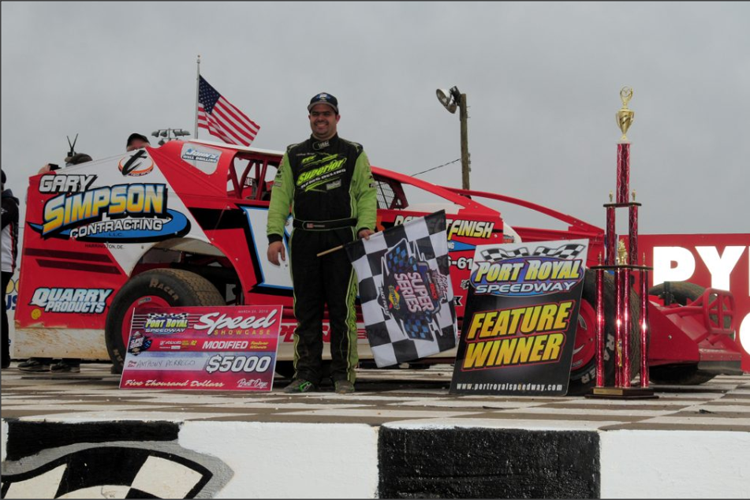 At the drop of the Sunoco checkered flags, it was Middletown, N.Y.’s Anthony Perrego taking a $5,000 victory in the ‘Speed Showcase’ driving for a Delmarva-based team owned by Gary Simpson. Perrego edged ‘Super Matt’ Sheppard in a back-and-forth battle before a large crowd.

Perrego is in his first year driving for the Simpson team on the series in search of the $10,000 STSS Velocita-USA South Region presented by Design for Vision and Sunglass Central title. His first win came in Race No. 2 of the season.

“We definitely have something to work with,” Perrego said of Simpson’s Pro Power/Teo-Pro car combination. “It’s a good piece.”

Perrego started 11th in the 27-car starting field at the ‘Speed Palace’ located on the Juniata County Fairgrounds. It veteran Jimmy Horton who launched off the pole at the start, but all-time leading STSS Modified winner Stewart Friesen – Horton’s teammate – advanced from his third starting position to the lead on lap two.

Friesen’s run, however, was derailed when he brought out the race’s only yellow flag on lap five, the victim of a power steering line issue.

Danny Bouc, with a back-up 360 cubic inch small-block engine under the hood of the Pondish Racing No. 6, assumed the lead. Bouc paced the field through lap 10 when Sheppard swept past with the Hurlock Auto & Speed No. 9s.

Meanwhile, all eyes were on Perrego, who had marched from his sixth-row starting spot to the top-three.

On lap 13, Perrego slipped by Bouc for the runner-up position and the battle was on. Sheppard and Perrego negotiated lapped traffic and used every inch of the speedway’s red clay.

Perrego first cleared Sheppard for the lead on lap 22. Sheppard got it back on the 24th circuit.

Perrego shot the gap to the inside of Sheppard on the 26th tour, but, once again, his lead was short-lived. Sheppard was back on the point on the 27th lap.

Perrego got a run to the inside down the backstretch. Sheppard attempted to block the low line entering turn three, but Perrego was there. The two slapped side rails, battled wheel-to-wheel before Perrego emerged with a lead he would not relinquish.

“I had to move him (Sheppard) a little bit,” Perrego said. “I hated to do it, but racing one of the best there is, I had to take that opportunity.”

Despite his runner-up finish, Savannah, N.Y.’s Sheppard was all smiles afterward with his $3,200 effort that included the $200 Precision Hydraulic & Oil Halfway Leader bonus.

“This is one of the raciest race tracks I’ve run on in a long time,” he said of his Port Royal debut.

Mat Williamson made the long haul south from Ontario, Canada and sliced through the field from his 19th starting position. After just 12 laps, he was fifth. Ultimately, he ended his ascent at third, nearly catching Sheppard in the final laps.

The effort was a morale builder for Williamson, who drove his own No. 6 big-block.

“After Florida, I didn’t know if I could drive a race car anymore,” he said, noting his struggles in the Sunshine State.

Williamson picked up $250 from Pioneer Pole Buildings Inc. as the event’s Hard Charger.

Pipersville, Pa.’s Bouc turned his early season around in fourth and Brett Hearn of Sussex, N.J., made his Port Royal debut a memorable one, completing the front five.

Placing sixth through 10th, respectively, were David Van Horn Jr. of Ringoes, N.J., in the VAHLCO Wheels No. 323ov; Oley, Pa.’s Craig Von Dohren driving the Dick Biever No. 14s; Mike Mahaney of King Ferry, N.Y., making his debut in the Huttig Motorsports No. 35; Rick Laubach of Hellertown, Pa., driving for Ryan Kerr; and Danny Johnson of Rochester, N.Y., at the controls of the Petruska family No. 66.

Friesen was the Beyea Custom Headers Fast Timer with a 19.110 fast time award.

PORT POINTS: Speedway promoter Steve O’Neal was so pleased with Sunday’s event that it was announced the Short Track Super Series would return on the same weekend in March next year, etching a date on the 2020 Port Royal Speedway calendar….

The win for Perrego was his sixth career STSS victory. He has now one on four different tracks on the circuit….

Tough luck for both Erick Rudolph and Billy Van Pelt, whose efforts were over early in the afternoon with engine problems….

Defending STSS South Region Ryan Watt had climbed into the top-three with the Ron Roberts No. 14W before a drive shaft issue sent him to the infield late in the event….

The top-three drivers received Oakley Sunglasses thanks to series sponsors Design for Vision and Sunglass Central….

Next up for the STSS is the Halmar International North Region opener on Sunday, April 7 at Orange County Fair Speedway in Middletown, N.Y. The Escape RV ‘Hard Clay Open’ offers $11,919 to win and $700 to take the green flag for 50 laps at the five-eighths-mile oval.