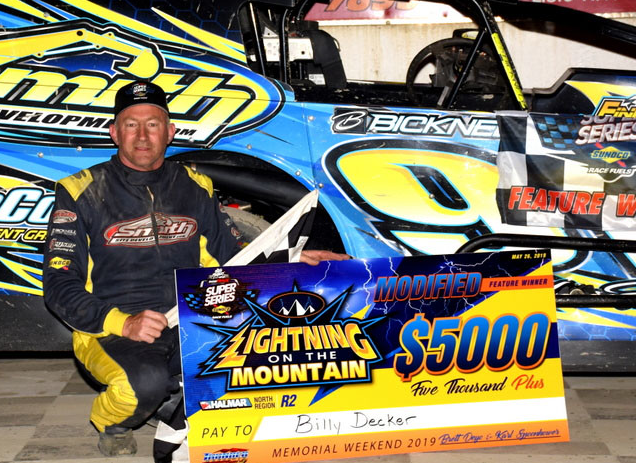 CENTER LISLE, NY – Though he earned a series championship during the 2018 season, a victory with the Bob Hilbert Sportswear Short Track Super Series (STSS) Fueled By Sunoco had eluded Billy Decker.

Decker, of Sidney, N.Y., thrilled a partisan local crowd at Thunder Mountain Speedway when he piloted the Jeremy Smith Racing No. 91 to a popular victory in the ‘Lightning on the Mountain’ STSS Modified event contested on the eve of Memorial Day.

The defending Halmar International North Region champion achieved the conquest in style, marching forward from 13th starting spot in the 50-lap main before a standing-room-only crowd. He pocketed $5,000.

Decker picked the worst number available in the post-qualifying redraw. Twelve drivers had earned positions through the six qualifying heats Sunday evening and a 13th – Shayne Spoonhower – got in the draw following a Dash event on Saturday.

Decker’s unlucky hand left him inside the seventh row. But a strong racecar gave the veteran driver confidence.

“It’s about damn time,” Decker said of ending his winless drought with the STSS. “I had a heck of a race car under me tonight. It’s been a long time since I’ve had one this good. When you are comfortable like that, it makes you brave to make moves through traffic.”

Back at the controls of his family owned No. 97 on the series, Jerry Higbie launched off the pole at the start of the main. Higbie checked out during the early going, while Stewart Friesen settled into second with the Halmar International No. 44.

Decker found the outside of the banked three-eighths-mile oval to his liking and had cracked the top-three running order by the 20th circuit. Both Friesen and Decker were closing on Higbie.

Higbie led the $200 Superior Remodeling Halfway Lap but his lead had evaporated.

With Friesen on the bottom and Higbie rim-riding, Decker shot the middle gap exiting turn four to lead lap 26 at the line.

“I knew I had a car good enough to go through the middle,” Decker surmised.

The race’s first caution didn’t fly until lap 31. Despite three additional yellows before the Sunoco checkered flag flew, Decker was up to the challenge, turning back the relentless challenges – both high and low – from Friesen.

Ontario’s Mat Williamson drove the Behrent’s Performance Warehouse No. 3 from 11th to complete the podium. Ryan Jordan of Groton, N.Y., a two-time winner on the Mountain this season, was a solid fourth in his No. R21 and Mike Gular of Boyertown, Pa., drove Terry Fasnacht’s No. 2A to fifth. Gular has back-to-back North Region top-five finishes to start the ’19 season.

Jeremy Smith topped a special B-Main and had the option of $500 or the 26th starting spot in the main event. He opted to race in the feature.

Tim Hartman Jr. of Niskayuna, N.Y., made his debut at Thunder Mountain a memorable one in the 25-lap Crate 602 Sportsman event. Hartman picked up the victory in Race No. 1 of the STSS North Region worth $1,500.

After working from last to win his heat race, Hartman started the main in third and shot into the lead by the fourth lap of the feature. He paced the remainder of the distance.

Dustin Jordan, who started fourth, drove to the runner-up spot late in the distance and closed on Hartman, but finished second ($700). Will Eastman, Pat Jordan and Casey Pavlick completed the front five.

The Chad Sindoni Memorial featured ‘topless’ Street Stocks and Dylan Cecce of Addison, N.Y., took a liking to racing his No. 7 without a roof. Cecce dominated the 25-lap event and pocketed a cool $1,000 for his efforts. Cecce convincingly took the win over Gene Sharpsteen, Trevor Dudley, Mike Wilbur and Shane Wolf Jr.

MOUNTAIN MEMOS: The 55-car STSS Modified turnout was the largest in five years on the Mountain. The holiday weekend event drew tailgaters and campers early in the day to the track, with the entire grandstand plus turn four viewing area and towers full….

Matt Sheppard rolled into Thunder Mountain on the heels of 11 consecutive victories. After a convincing heat win and draw of ‘four’ many believed he could get No. 12. However, Sheppard’s car lost brakes on the 10th lap of the event and he was later collected in a turn-one tangle….

A tire issue ended what was a very promising night for Jerry Higbie, who led the race’s first half….

Crate 602 Sportsman winner Tim Hartman Jr. pulled double duty in both the Parillo Services No. 22 Sportsman and Jim Becker’s No. 9 STSS Modified. Hartman finished 19th in his Modified debut on the Mountain….

Next up for the Bob Hilbert Sportswear Short Track Super Series Fueled By Sunoco is the annual North vs. South ‘Anthracite Assault’ at Big Diamond Speedway in Minersville, Pa., Tuesday, June 4. Modifieds race 50 laps for $5,000 to win, $1,000 for 10th and $400 to take the green with points on the line for both the Halmar International North Region and Velocita-USA South Region presented by Design for Vision and Sunglass Central.


‘LIGHTNING ON THE MOUNTAIN’ RACE SUMMARY – THUNDER MOUNTAIN SPEEDWAY MAY 26, 2019

Did Not Start: Mike Bowman.