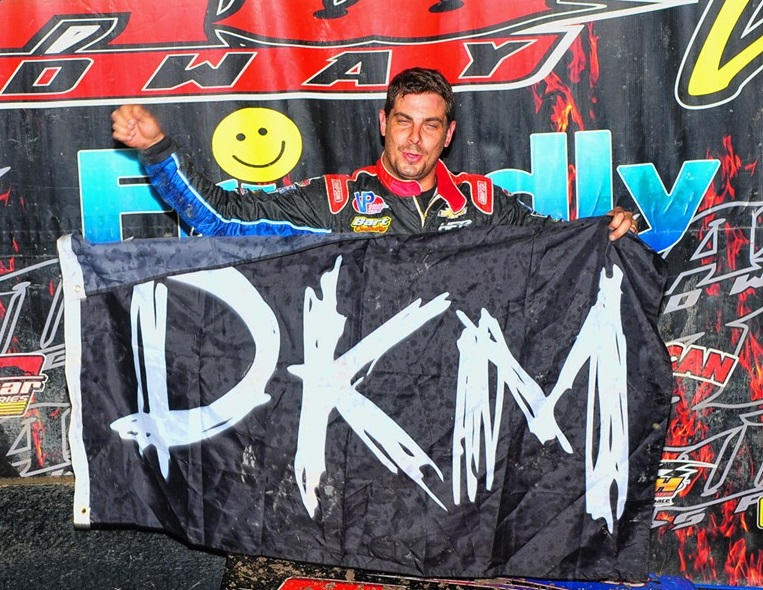 Recovering from a miserable outing in the season’s most recent event at Big Diamond Speedway in Minersville, Pa., Stewart Friesen won the ‘Outlaw Showdown’ at Outlaw Speedway for the second consecutive year. Friesen prevailed in Race No. 4 of the Halmar International North Region nine-race schedule.

The win for Friesen was his 14th in 71 Short Track Super Series events and second of the season with the series, having won at Georgetown (Del.) Speedway in March.

Precipitation moved over the facility on the 33rd lap, curtailing the night’s scheduled 50-lap feature 17 laps shy of the finish. Since the event was past halfway, scoring reverted to lap 33 and the results were deemed official.

Friesen celebrated in Victory Lane as the showers grew heavier.

At the pre-race drivers’ meeting, Sprakers, N.Y.’s Friesen drew ‘72’ of a possible 75, relegating him to an eighth-place starting berth in his heat race, which he won.

A redraw of the top heat-race qualifiers put Friesen’s Halmar International No. 44 on the pole for the main event alongside Mike Mahaney.

Friesen darted into the lead early while Billy Decker shot from fourth to second. Decker was pressuring Friesen for the lead when a flat left-rear tire caused his Jeremy Smith Racing No. 91 to spin in turn one, collecting Mike Gular and Pat Ward on lap eight.

Following the melee, ninth-starter Sheppard sat fourth in his Hurlock Auto & Speed No. 9s. He bolted into second, with eighth-starter Mat Williamson climbing to third.

Williamson found the high line to his liking in the Behrent’s Performance Warehouse No. 3 and began making moves. Williamson followed Friesen and pulled up alongside Sheppard for second. The two would battle side-by-side, trading paint on three separate occasions.

Sheppard finally inched ahead and began reeling in Stewart Friesen as the two approached lap traffic. However, under a caution for Kyle Coffey on lap 24, Sheppard headed to the pit area with a soft right-rear tire.

Meanwhile, Erick Rudolph emerged as a contender. After starting 13th, Rudolph’s big-block-powered car ducked beneath Williamson for second on lap 30.

A light sprinkle, however, intensified on lap 33 causing the cars to be sent to the pits. The rain ultimately ended the event.

Friesen picked up a victory worth $5,425: $5,000 from the posted payout, $200 as the Superior Remodeling Halfway Leader, $125 as the MJK Home Maintenance Heat-Race Hard Charger and $100 from Rob Sherlock Roofing as a heat winner.

Rudolph, of Ransomville, N.Y., made his return to STSS competition a successful one, earning a $3,000 runner-up finish.

Placing sixth through 10th, respectively, were Andy Bachetti of Sheffield, Mass., up from 20th on the grid; Alan Johnson of Middlesex, N.Y., who started 11th; Billy Van Pelt of Westfield, Pa., recovering from a flat tire on lap 12; Decker of Sidney, N.Y., rebounding from his lap-eight melee; and Johnstown, N.Y.’s Craig Hanson, who started 26th.

A field of 40 STSS Modifieds signed in for competition.

OUTLAW OUTLETS: With numerous showers in the area, Outlaw Speedway went on with Wednesday night’s program. Despite the threatening weather, a healthy, but late-arriving crowd filed into the speedway’s historic grandstand….

Series traveler Anthony Perrego was an early retiree in the event with a broken radius rod mount on the Superior Remodeling No. 44….

Ryan Jordan made his debut in a brand-new No. R21 Modified but was the first car out of the feature with a stuck throttle….

Next up for the Short Track Super Series is the Fuccillo Automotive Group ‘Firecracker 50’ presented by Teo-Pro Car at Fonda (N.Y.) Speedway, Race No. 5 of the Halmar International North Region paying $10,000-plus to win for 50 laps. The STSS Crate 602 Sportsman North Region race 25 laps for a massive $2,000 to win.