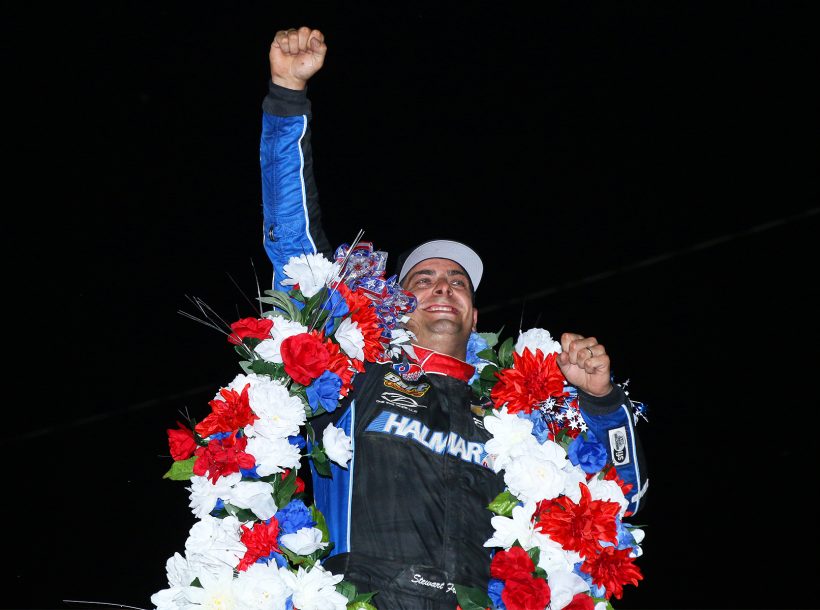 FONDA, NY – For the first time in the history of the Bob Hilbert Sportswear Short Track Super Series (STSS) Fueled By Sunoco, Fonda Speedway joined the series schedule in 2019.

And what a debut it was on Wednesday night.

After a wild 50-lap roller-coaster of a race, it was Sprakers, N.Y.’s, Stewart Friesen grabbing the win and the $10,700 in the inaugural Fuccillo Automotive Group ‘Firecracker 50’ presented by Teo-Pro Car at the Track of Champions.

Friesen needed every one of the race’s 50 laps to get the job done before the largest crowd in Short Track Super Series history.

After blowing a right-rear tire with 19 laps to go, Friesen roared back to beat Matt Sheppard to the line on the final lap to grab the Sunoco checkered flag in Event No. 5 of the Halmar International North Region.

At the drop of the green it was a Friesen leading the way. However, it was Jessica Friesen who grabbed the lead from her front-row starting position in the early going.

After a yellow on lap five for Larry Wight, who made his STSS debut Wednesday night, Jessica Friesen began to show the field, and the crowd, she was there to win.

Friesen pulled away from Rocky Warner and Erick Rudolph before catching lap traffic. Meanwhile, Stewart Friesen had climbed from his eighth starting position, and got to second.

Stewart would eventually make the move past his wife, Jessica, to take the lead on lap 23. However, on lap 31 the entire race flipped on its ear.

The yellow flag came out with Jessica slowing due to engine issues off of turn two, while nearly simultaneously, Stewart blew a right-rear tire in turns three and four.

All of a sudden, Waterloo, N.Y.’s, Matt Sheppard would inherit the lead after stealthily climbing from his seventh starting position to third. However, on the restart, Rudolph, of Ransomville, N.Y., jumped to the outside and drive around Sheppard for the lead.

It appeared his lead would be short lived with Sheppard applying the pressure, going high and low, searching for a lane. Meanwhile, Friesen had quickly gone from the back of the pack, to the sixth position after slicing through the field.

After a yellow on lap 37, Sheppard took advantage of the restart, taking the lead and pulling away from Rudolph. After a couple of laps, it became apparent, Sheppard’s biggest competition was a blue and black number 44 machine powered by a 360 small-block engine.

Friesen had gotten to the runner-up spot with eight laps to go, but it appeared he would run out of time. That was until Sheppard caught the tail of the field with three laps to go. Friesen closed fast and was on Sheppard’s bumper at the white flag.

Setting up a last lap for the ages, Sheppard left the top open in turns three and four, and it was all Friesen needed. Side-by-side, door-to-door, sparks flying and a roaring crowd, it was Friesen edging Sheppard for the win.

“I thought we were gonna drive away when we got the lead, but Stew’s just so fast here,” Sheppard said afterward.

“This is just awesome,” was the most Friesen could muster in Victory Lane following the win in front of a vocal crowd.

Rudolph hung on for a podium finish in third. Middletown, N.Y.’s, Anthony Perrego would drive the Graham Racing No. 18 machine to a fourth-place finish. Track regular and four-time Fonda winner Rocky Warner of Gloversville, N.Y., rounded out the top five.

Brian Calabrese, Adam McAuliffe, Mark Mortensen and Chad Edwards put on the most entertaining battle of the night, battling back-and-forth for the second and third positions.

When the checkered flew, it was Calabrese grabbing the runner-up spot and McAuliffe would round out the podium finishers. Edwards and Mortensen completed the front five.

Hartman won for the second time this season with the STSS. He was a Memorial Day weekend victor at Thunder Mountain Speedway in Center Lisle, N.Y., to kick off the North Region.

FONDA FINDS: The stout 39-car STSS Modified field was joined by 35 Crate 602 Sportsman on hand. The spacious grandstand area was filled to near capacity with a huge crowd on hand….

John Lakata designed a custom, unique trophy for the STSS winner that encompassed the freedom theme and the historic Fonda covered grandstand….

Andy Bachetti has earned top-10 finishes in all of the Halmar International North Region events run this season….

The family of late race fan Mike Cole were prominent during the evening and offered the command of ‘Gentlemen, Start Your Engines’ before the main….

The night’s program was filmed with multiple camera angles for national MAV-TV broadcast in September….

Racing resumes for the STSS on Tuesday, July 9 with the ‘Battle of the Bullring 7’ at Accord (N.Y.) Speedway featuring the Halmar International North Region Modifieds, Crate 602 Sportsman North Region and Four Cylinders.