Bullring Battle: Andy Bachetti Emerges from Rough-and-Tumble Accord ‘Battle of the Bullring 7’ Victorious 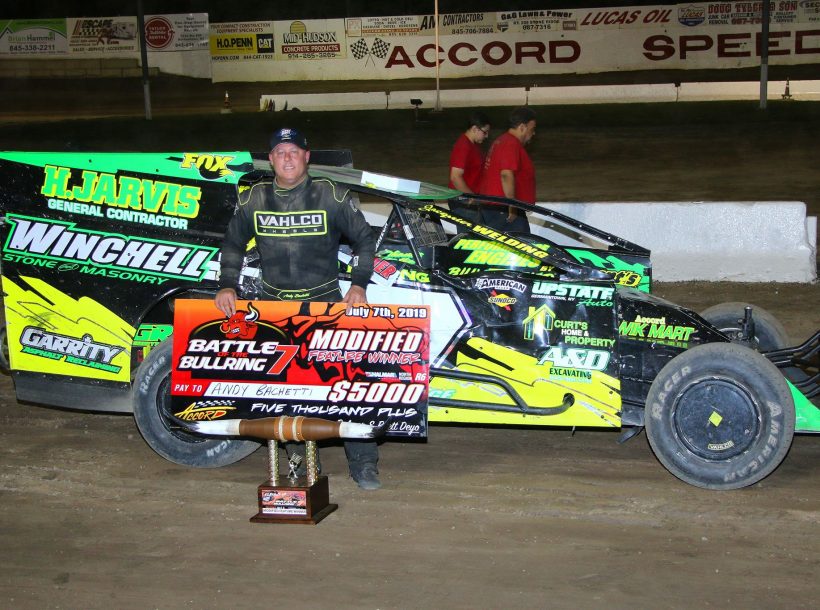 ACCORD, NY – The Bob Hilbert Sportswear Short Track Super Series (STSS) Fueled By Sunoco visit to Accord Speedway is dubbed the ‘Battle of the Bullring’ each summer.

Emphasis on the word “battle” on Tuesday night at Ulster County Bullring.

Andy Bachetti ultimately grabbed the bull by the horns and picked up a $5,000 top prize in the 50-lap main event, serving as Round No. 6 of the Halmar International North Region.

On a night that saw a variety of drivers charging through the field, Sheffield, Mass.’s Bachetti won for the first time with the series since last October at Thunder Mountain Speedway in Center Lisle, N.Y.

“We’ve been close all year,” Bachetti, who had earned top-10 finishes in each of the first five STSS Halmar International North Region events, said after climbing out of the Jim Winchell No. 17. “We’ve just needed a little bit more.”

At the start of the rough-and-tumble main, Jimmy Wells used the outside pole to take command in his No. 831. Bachetti, who started fourth, worked into second.

Following early cautions for skirmishes throughout the field, a green-flag stretch ensued from laps 11-17 with Bachetti chasing Wells into lapped traffic on the tight bullring.

Back-to-back cautions on laps 27 and 28 ultimately changed the race’s complexion.

Bachetti edged ahead of Wells on a 28th-lap restart. Entering turn three, the pair connected and Wells spun, ending his outstanding drive.

Craig Hanson now moved into second with Mat Williamson, who had restarted last after a tangle on the opening lap with the Behrent’s Performance Warehouse No. 3, emerging in third.

Entering turn one on lap 35, the order was shaken up again with Hanson spinning to collect several cars and Williamson tagging the rear of the field.

Over the final 15 laps of the main, Bachetti held command, driving off to his fifth career victory with the Short Track Super Series.

All eyes were on a wild battle for the runner-up spot involving Rich Ricci Jr., Matt Sheppard and Mike Gular.

On the final lap, it was Gular moving into second in the most unlikely fashion.

Gular’s Terry Fasnacht team broke down on the way to the track in the Lehigh Valley. With the assistance of racer Ryan Krachun and his borrowed truck, they arrived just in time for hot laps.

The night appeared to be over when Gular’s No. 2A went up in smoke during his heat race.

Mike Ricci then offered his back-up car to Gular, which he qualified through the consolation. Starting the feature 24th, the Boyertown, Pa., driver shook off a lap-seven tangle to race back to second, worth $3,000 plus the $200 Land Hoe Maintenance Hard Charger Award.

After starting 19th, perennial Accord champion Rich Ricci Jr. recorded a podium finish in the family owned No. 406.

After heading to the pits early on, Sheppard, of Savannah, N.Y., methodically moved back through the field for fourth and 18th-starter J.R. Hurlburt of Otego, N.Y., recorded his best series finish of the season in fifth with the Jamie and Denise Page Algonkin Motel No. 6H.

The record will state Tim Hartman Jr. started on the pole and won the 25-lap STSS Crate 602 Sportsman North Region main event. This race, however, was far from a green-to-checkered romp for the Niskayuna, N.Y., driver.

Young Blaine Klinger, a regular at Afton (N.Y.) Motorsports Park, outgunned Hartman from the outside pole to lead lap one and kept Hartman at bay for much of the event, Race No. 4 of the STSS Crate 602 Sportsman North Region.

With lapped traffic looming, Hartman was able to slip past Klinger inside the race’s final five laps.

Klinger did not go down without a fight. The Walton, N.Y., driver pulled back up to the bumper of Hartman on the final lap, but settled for second.

Hartman extended his STSS point lead with his second series win of the season, pocketing $1,500.

BULLRING BITS: Filling the Accord Speedway pit area for the track’s only midweek event of 2019 were 33 STSS Modifieds, 36 STSS Crate 602 Sportsman and 21 Four Cylinders….

The WELD Wheels Hard Luck Award went to Billy Pauch Jr., who qualified amidst a plume of smoke for the 50-lap feature and was unable to start the 50-lap main due to engine issues with the Bill Pascual No. 3….

Stewart Friesen retired from the event 15 laps shy of the finish due to an oil leak on the Halmar International No. 44. Friesen had run much of the race with a flat left-front tire….

More than $30,000 in purse money was distributed for the two STSS open-wheel divisions alone….

The STSS Halmar International North Region takes a one-month break before heading to Woodhull (N.Y.) Raceway on Tuesday, Aug. 13 with both the Modifieds and Crate 602 Sportsman in competition….

Did Not Start: Billy Pauch Jr.

Did Not Start: Cole Stangle