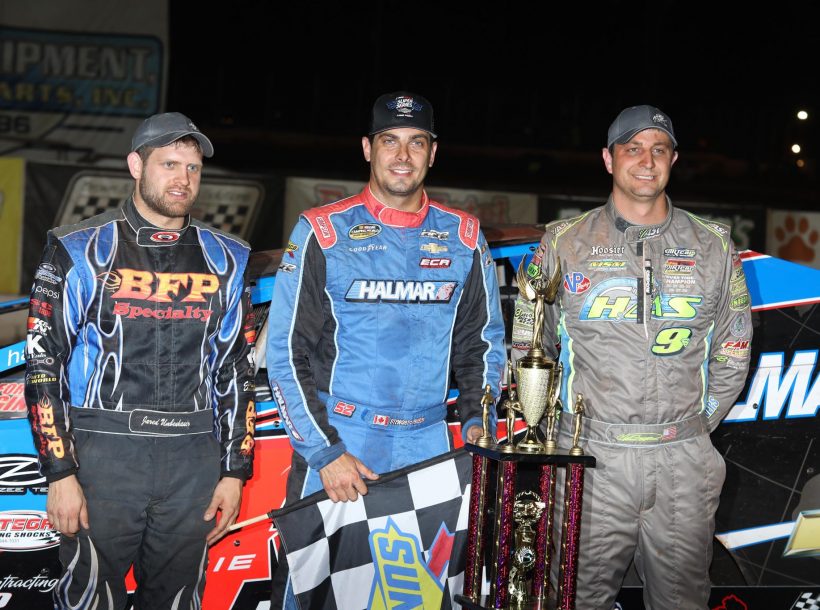 Friesen, of Sprakers, N.Y., rebounded from a pair of consecutive runner-up finishes after leading the York County Nationals to win the 18th edition presented by Sunoco Race Fuels and Insinger Performance. The 50-lap conquest annexed Friesen a paycheck of $10,300 for his efforts.

Friesen started the event sixth in the big-block-powered Halmar International No. 44 DKM mount.

Pole starter Rick Laubach, however, set the pace from the outset of the main. Laubach’s Ryan Kerr-owned No. 1K shot into the lead with the drop of Joe Kriss’ green flag.

On lap 15, the stout performance by Laubach came to a halt on the frontstretch as he lost power and coasted to a stop.

“He was setting a pretty good pace,” Friesen said of Laubach. “I was trying to ride a little bit early on. The track was fast tonight.”

With Friesen now leading, 18th-starter Duane Howard was on the move in Norm Hansell’s No. 357. Howard cracked the top-five by lap 15.

Following a 25th-lap restart, Howard swept past Matt Sheppard – who had made his own charge from 12th on the starting grid – on the outside lane for third, then drove inside Jared Umbenhauer for second.

The runner-up spot was as high as Howard would get. His car began showing smoke on lap 30. Three laps later, the Oley, Pa., driver retired to the infield.

Sheppard was able to clear Umbenhauer for second and appeared to close on race leader Friesen in the late distance.

With just five laps remaining, Billy Pauch Jr. slowed in turn three to draw the caution. Sheppard lined up behind the leader for a final five-lap dash, but Friesen repelled all advances for the conquest.

“I tried to switch it up the last couple laps,” Friesen said, knowing ‘Super Matt’ lined up on his rear bumper for the restart. “It was good enough.”

Sheppard, the race’s 2018 winner, settled for second position, extending his lead in the STSS South Region standings with three events remaining as he races for a $10,000 championship.

“The redraw kind of beat us tonight,” noted Sheppard, who picked the worst number – 12 – of all the top qualifiers.

Sheppard, like Friesen, was utilizing big-block power between the frame rails of his Hurlock Auto & Speed No. 9s.

Umbenhauer, of Richland, Pa., guided the second Dick Biever-owned No. 14s to a series-best third-place finish, running as a teammate to Craig Von Dohren. Umbenhauer was thrilled with the effort, piloting a 360 cubic inch small-block engine.

“This feels like a win to me,” offered Umbenhauer after chasing the sport’s two titans across the line.

Jeff Strunk of Boyertown, Pa., guided Glenn Hyneman’s No. 126 to a fourth-place result and Andy Bachetti’s long ride to Central Pennsylvania from Sheffield, Mass., resulted in a top-five finish aboard his Garrity Asphalt No. 4.

Friesen received $100 as the Beyea Custom Headers Fast Time Award recipient with a lap of 17.824.

BAPS BEATS: A sizeable Sunday crowd took in the second and final STSS appearance in Central Pennsylvania for the season, witnessing a quickly run program that saw the Modified checkered fly prior to 10 p.m. with a workday looming….

Tough luck for heat winner Danny Bouc, whose Craig and Leslie Pondish No. 6 showed signs of smoke almost immediately in the main event. Jimmy Horton also retired from the event after losing power on the Halmar International No. 43….

Richie Pratt Jr. saw a solid performance nixed by a right-rear flat tire on the Danny’s Pizza Pizzazz No. 51….

The Short Track Super Series takes a hiatus of approximately one month before firing into August with three consecutive weeks of racing kicked off by the ‘Hustlin’ the High Banks 55’ at Woodhull (N.Y.) Raceway on Tuesday, August 13 featuring the Halmar International North Region Modifieds and Crate 602 Sportsman and ted White’s high-banked facility.

Did Not Start: Nick Mady