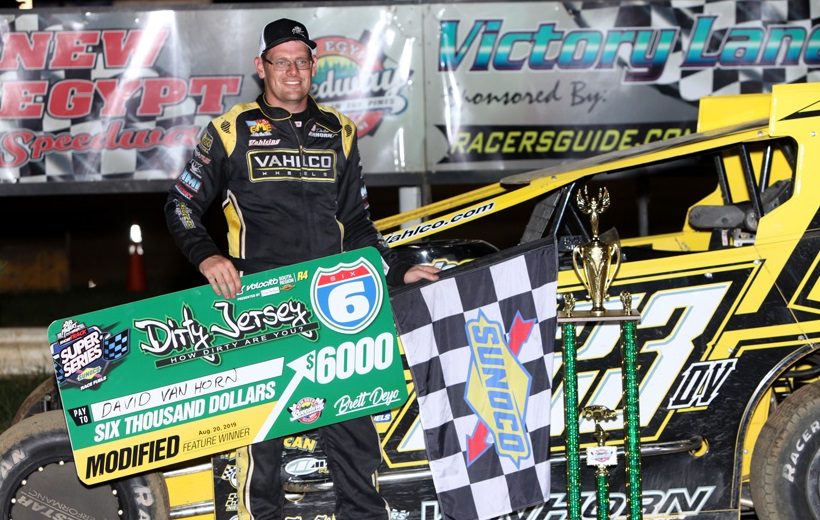 On Tuesday night at New Egypt Speedway, Van Horn picked up his first series win since August 5, 2015 in style, topping the ‘Dirty Jersey 6’ 40-lap main for a $6,250 payday in Round No. 6 of the STSS Velocita-USA South Region presented by Design for Vision and Sunglass Central.

The win – Van Horn’s second with the series – came at the controls of Fred Vahlsing’s VAHLCO Wheels-sponsored No. 323ov with big-block power between the frame rails.

“It was awesome,” Van Horn, who resides in Ringoes, N.J., reflected. “Even last week, when the track was slick here the car was perfect. Tonight the track had a little more bite. The bottom was the place to be early then the top cleaned off and I moved up.

“It feels good to win one of these (STSS) races again. The competition is always tough.”

Van Horn started third in the main event. From the pole, veteran Wade Hendrickson shot into the lead and paced the opening four circuits before Van Horn took command for the first time.

Hendrickson held second position through a lap-15 restart when Danny Bouc – driving the Craig and Leslie Pondish No. 6 – rolled the extreme outside lane to second after starting ninth.

Bouc continued his drive toward the front, sweeping by Van Horn to take the lead before a caution on the 19th lap.

Bouc picked the outside lane for the restart, but Van Horn was ready. DVH surged off the bottom to lead the Precision Hydraulic & Oil Halfway Lap. Van Horn now changed his line to the outside with Bouc in pursuit.

Grosso took over the runner-up spot on the 26th lap. Despite four cautions in the race’s final 14 circuits, Van Horn was flawless, powering to a victory at the track where he is the defending champion.

Montgomery, N.J.’s Grosso finished a stout second, collecting the $3,000 payday that accompanied it. Ryan Watt of Boyertown, Pa., righted his New Egypt misfortunes with a third-place result in the Ron Roberts-owned No. 14W. Mike Gular of Boyertown, Pa., raced amidst the top-six for the entire distance and placed fourth with Terry Fasnacht’s No. 2A.  Lawrenceville, N.J.’s Hendrickson was fifth in Pat Michael’s No. 51M.

Finishing sixth through 10th, respectively, were Andy Bachetti of Sheffield, Mass., who charged forward after pitting early in the event; 12th-starter Duane Howard of Oley, Pa., in Norm Hansell’s No. 357; Craig Von Dohren, also of Oley, Pa., after starting 15th; track regular Cale Ross of Lambertville, N.J., up from 18th; and a resurgent Bouc of Pipersville, Pa.

The Capitol Renegade United Racing Club (URC) 360 Sprint Cars returned to New Egypt for the $2,000-to-win ‘Turnpike 25’ event. Wantage, N.J.’s Davie Franek took home the cash. After a mid-race challenge from J.J. Grasso (who succumbed to a flat tire), Franek motored away for the triumph on Garden State soil.

The Crate 602 Sportsman drivers completed timed hot laps to set the order for the fourth event of the ’19 South Region. Davis set the fast time and started from the pole. In a fast-paced event slowed just twice by caution flags, Davis led wire-to-wire.

The Chemidlin family presented a $747 Hard Charger Award in the STSS Modified division in memory of late driver and car owner John Chemidlin. Rick Laubach received the extra cash driving from 24th to 13th with members of the Chemidlin family making the presentation….

Uncharacteristic tough night for Matt Sheppard, who suffered a flat tire running inside the top six, spun once and was collected in a turn-three incident before limping home 16th….

Track conditions were wide and tacky with limited dust for the event, drawing praise from competitors and fans….

Delaware’s Georgetown Speedway hosts the next STSS event with the VAHLCO Racing Wheels ‘Blast at the Beach’ presented by Melon 1 on Tuesday, August 27 (rain date Wednesday, August 28). The event will be recorded for broadcast on MAV-TV and features STSS Modifieds (35 laps, $6,000 to win) in a Velocita-USA South Region event, STSS Crate 602 Sportsman (20 laps, $1,500 to win), Delmarva Chargers and Delaware Super Trucks.