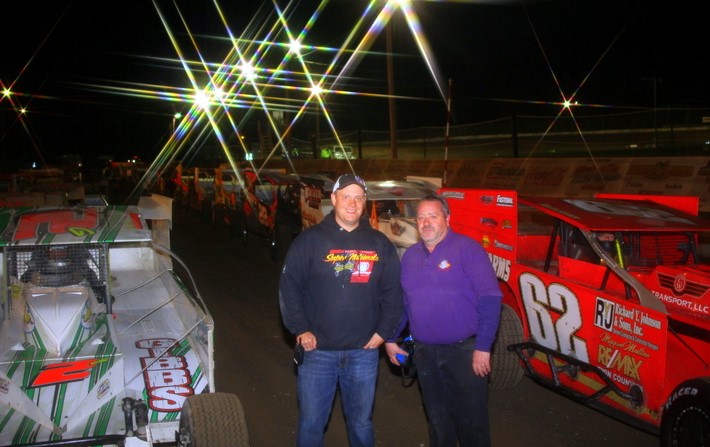 AFTON, NY – The race they said would never work is still going strong.

In fact, it celebrates its 12th running this weekend: Friday, October 11 and Saturday, October 12 at Afton Motorsports Park.

Entering its 12th edition, the Short Track SuperNationals is again contested at its birthplace, as Afton Motorsports Park promoter Ron Ford and Deyo partner for the two-day 2019 festival.

The Beginnings
The Short Track SuperNationals began as an affordable alternative to the Super DIRT Week festivities at the Syracuse mile. For both events, the venues have changed since that very first ’06 edition, but the concept remains the same. The SuperNationals offers the Friday, Saturday or Sunday night weekend warrior an ‘away race’ with camping, a well-balanced pay structure and a chance to shine.

Each season, the SuperNationals attracts one of, if not the largest, car count in Northeast Modified racing.

Of course, the big-block/small-block Modifieds of the Bob Hilbert Sportswear Short Track Super Series (STSS) Fueled By Sunoco take the lead role on the weekend, with a 50-lap event on Saturday paying $5,500 to win, $1,000 for 10th and $400 to take the green flag plus a number of special awards and bonuses.

Modifieds will be included in the Friday program with rounds of timed hot laps and a Dash offering the winner a redraw in the Saturday 50-lapper.

Joining the STSS Modified headliner on Saturday are the STSS Crate 602 Sportsman in the final round of the North Region paying $1,500 to win (25 laps) plus Street Stocks offering $750 to the victor and the Mohawk Valley Vintage Dirt Modifieds in a pair of main events.

Friday night is topped by the Sportsman in a 30-lap feature paying $1,500 to win ($2,000 with “Gambler’s Fee” posted), CRSA Sprint Cars in the series’ championship round (25 laps), Slingshots paying $350 to win and the aforementioned Modified practice.

Champions from each of the individual American Racer Cup tracks are invited to take part in the one-on-one match races. Sportsman are featured on Friday night, with Modifieds on Saturday night.

The Modified winner takes home $2,000 cash, with the Sportsman victor receiving $1,500 for their efforts!

Year-long American Racer Cup certificates will be ready for distribution and Lias Tire representatives will be on hand.

Amazingly, in 11 years and 550 feature-event laps, there have been no repeat winners.

Short-track ace Mike Ricci started off the SuperNationals tradition by winning the ’06 edition at Afton.

After a hiatus of two years, the event returned in ’09 at Five Mile Point, where it would be run through ’13. Kevin Hirthler made the drive from Pennsylvania pay off with a win in ’09, while Sportsman star Justin Holland put his name on the map in the ’10 edition. Driving the Atlas Paving No. 66, Duane Howard prevailed in ’11, with Danny Tyler annexing the ’12 running and Craig Hanson registering the most prominent win of his career in ’13.

Afton, then run under the I-88 moniker with Jamie and Denise Page at the helm, was back as the host starting in ’14. Shaun Walker was the hometown winner in the ’14 program, with Danny Creeden taking the ’15 race, Ryan Godown besting the field in ’16 and Rusty Smith thrilling the crowd in ’17.

With Afton in need of a resurfacing last fall, Thunder Mountain’s Spoonhower family jumped in to host the ’18 edition. Andy Bachetti scored a last-lap victory over Mat Williamson to become the 11th consecutive different winner.

The Points
The Short Track SuperNationals serves as a points-paying race for both the STSS Modified Halmar International North Region and STSS Crate 602 Sportsman North Region.

Matt Sheppard holds the Halmar North Region Modified division top spot with just two events remaining on the series (Afton and N.Y.’s Orange County Fair Speedway Thursday, October 24). Sheppard leads by three markers over Stewart Friesen (who has NASCAR commitments at Talladega, Ala., for the SuperNationals), Andy Bachetti by 17, Mat Williamson by 41 and Mike Gular by 45.

In the Crate 602 Sportsman battle, Tim Hartman Jr. holds a commanding 107-point edge entering the SuperNationals. Hartman needs only to take the green flag to secure the $1,500 championship.

$57,500 (Super) Man?
The Short Track SuperNationals carries added pressure for the driver known as Super Matt. Already this season, Matt Sheppard has clinched the overall American Racer Cup title (worth $10,000). He needs only to start the Mid-Atlantic Championship at Georgetown (Del.) Speedway Nov. 2 to clinch the Velocita-USA South Region title ($10,000).

Should Sheppard string together North Region championship-winning finishes at Afton and Orange County, he will receive $12,500 as the North title holder and sets himself up for a cash bonus of $25,000 from Sunoco Race Fuels and Insinger Performance.

Sheppard, conceivably, is just 100 laps away from the richest-ever championship in dirt Modified racing worth $57,500. That road runs through Afton, New York.

A Resurgent Venue
Afton Motorsports Park’s current promoter Ron Ford doesn’t shy away from a challenge. Ford, faced with a batch of clay that didn’t meet expectations, struggled through the ’18 season with track issues and declining fan and racer counts. Ford ended the season early, but didn’t give up.

Loads upon loads of clay were trucked into the Afton facility during the winter months. The result: a revitalized Afton Motorsports Park in ’19. The racing improved and so did the attendance. Car counts and grandstand numbers hit new highs as three-wide action on the track became the norm.

The stage is now set at a re-energized Afton facility as the Short Track SuperNationals turns 12 this weekend.