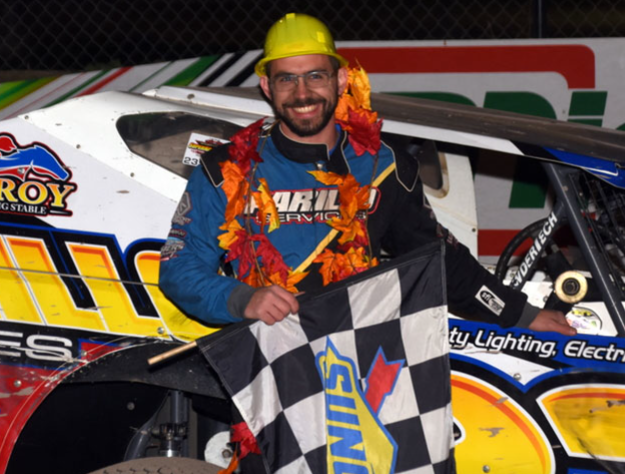 AFTON, NY – One heck of a shakedown!

“We came here tonight to get some laps before tomorrow’s show,” Hartman said, referring to the final round of the Bob Hilbert Sportswear Short Track Super Series Fueled By Sunoco Crate 602 Sportsman North Region finale.

“I knew we had a good car, but I never expected to win.”

A field of 54 Sportsman drivers packed the Afton pit area. Twenty-six started the 30-lap main, with Hartman rolling off from seventh.

Afton regular Allan Hodge led the opening 10 laps of the main event before Hartman’s Parillo Services No. 22 worked the low line to the top spot.

Davis charged from eighth starting spot into second and worked on Hartman for the race’s final half, ultimately setting for second.

On the eve of the 12th “Working Man’s Race” 34 Modifieds took practice laps around the Afton oval.

The fastest eight drivers went to an 8-lap Dash and Danny Bouc of Pipersville, Pa., made his Afton debut a memorable one. Bouc outlasted Andy Bachetti and put the Craig and Leslie Pondish No. 6 into the redraw for Saturday’s main event.

Alysha Bay took advantage of a spin by Emily Van Inwegen in slower traffic to come out on top of the Super Gen Products CRSA Sprint Car 25-lap event. Mike Kiser charged hard late in the going but settled for runner-up pay.

Jeff Trombley only needed to take the green flag to be crowned the CRSA Sprint Car champion and, after suffering mechanical woes, did just that. Trombley started the race and darted to the infield, waiting the 25 laps to celebrate his championship.

Slingshots made their first-ever Short Track SuperNationals appearance with 17 cars turning out. Scott Neary overcame a late-race penalty for jumping a restart to take the $350 payday. Jarred Silfee came home second, with Brett Putnam rebounding from a spin to place third.

Racing resumes on Saturday for Day No. 2 of the Short Track SuperNationals weekend. Headlining the program are the STSS Modifieds racing 50 laps for $5,500 to win in the seventh round of the Halmar International North Region plus the American Racer Cup Modified Match Races ($2,000 to win), Crate 602 Sportsman in the Championship Round for $1,500 to win, Street Stocks ($750 to win) and Mohawk Valley Vintage Dirt Modifieds.

Complete Saturday race information can be found at the following link: http://shorttracksuperseries.com/wp-content/uploads/2019/09/SaturdaySTSNInformationSheet.pdf