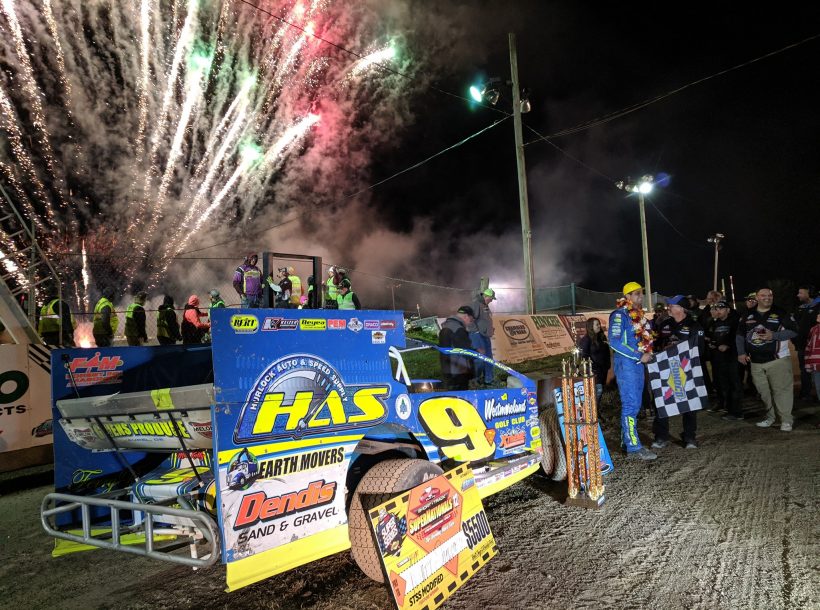 With a jam-packed pit area filled with 165 race cars Saturday at Afton Motorsports Park, Matt Sheppard put another line on his resume, taking home the top prize from the 12th running of the American Racer Cup Short Track SuperNationals Weekend.

In the process, the Savannah, N.Y., driver inched closer to another piece of history as he chases the $57,500 Sunoco Race Fuels/Insinger Performance ‘Grand Championship’ with now just two events remaining.

“This was a big race for us,” Sheppard said in Victory Lane as fireworks lit up the Afton sky. “It’s another step closer to the goal at the end of the season.”

Sunoco Race Fuels and Insinger Performance have offered a huge $25,000 cash bonus to a driver winning the STSS North and South Regions plus the American Racer Cup which would bring a driver’s earnings to $57,500 total. Sheppard has already won the Cup and needs only to take the green at Georgetown (Del.) Speedway on Nov. 2 to win the South title. After his win on Saturday, he holds the lead into the North Region finale at Orange County Fair Speedway in Middletown, N.Y., Thursday, Oct. 24.

Sheppard’s day didn’t start out easy at Afton. He drew 71 of a possible 75 numbers and started ninth in his heat race. He was able to carve through the field in his qualifier and make the redraw.

For the 50-lap main event, he started fourth.

Pole starter Bobby Varin didn’t make it easy on Sheppard. Varin held the lead in the Palmer’s Service Center No. 76 for 21 laps around the Afton oval, darting in and out of lapped traffic with Sheppard on his heels.

Ultimately, Sheppard took command of the event on lap 22 and would never be seriously challenged. Sheppard negotiated lapped traffic and survived a final restart with three laps remaining to take a victory worth $5,825.

Sheppard took home the $5,500 winner’s share, a $200 bonus from Superior Remodeling as the Halfway Leader and $125 as the MJK Home Maintenance Heat-Race Hard Charger.

Johnstown, N.Y.’s Varin, who participated in the very first Short Track SuperNationals back in 2006, recorded a second-place finish worth more than $3,000.

“We were definitely better tonight than we’ve been,” Varin said. “We had a good car, but Matt (Sheppard) was in a whole different world.”

Finishing sixth through 10th, respectively, were Danny Bouc of Pipersville, Pa., who ran as high as second in the Craig and Leslie Pondish No. 6; Ryan Jordan of Dryden, N.Y., up from 17th; Jimmy Wells of Tillson, N.Y.; 15th-starter Brett Tonkin of Carbondale, Pa.; and Alex Yankowski of Covington Township, Pa.

Representing Accord (N.Y.) Speedway, Jimmy Wells came out victorious from the American Racer Cup One-on-One Match Races. Wells won the final six rounds of the Match Races including the final one in a standoff against Sheppard. Wells received $2,000 for his efforts. All other participants took home a free tire certificate courtesy of American Racer.

Tim Hartman Jr. completed a perfect weekend at the Short Track SuperNationals. Hartman won the 25-lap STSS Crate 602 Sportsman North Region finale, not only registering the $1,500 victory, but clinching the championship in the five-race series as well. Hartman will receive $1,500 for the title in January at the series Awards Banquet.

Hartman took over the lead when Dave Rosa pulled to the infield was paced the remainder of the distance over Nick Nye, Kenny Hammond, Dale Welty and Bobby Flood.

A stacked field of 47 STSS Crate 602 Sportsman took part in the program.

Doug Polhamus took home $750 as the Street Stock victor. The season’s largest field at Afton – 32 cars – checked in for competition. Polhamus first emerged from a battle with Jerry Lobdell, then fought off a late-race charge from Kurt Decker to take the win. Decker, Jonathan Carpenter, Doug Stack Sr. and Shane Wolf Jr. trailed.

The Mohawk Valley Vintage Dirt Modifieds made the pilgrimage to Afton with 32 cars in attendance. John Kuleseo and Brian Moore led two events across the stripe.

Complete information is at the following link: www.shorttracksuperseries.com/wp-content/uploads/2019/09/SaturdaySTSNInformationSheet.pdf