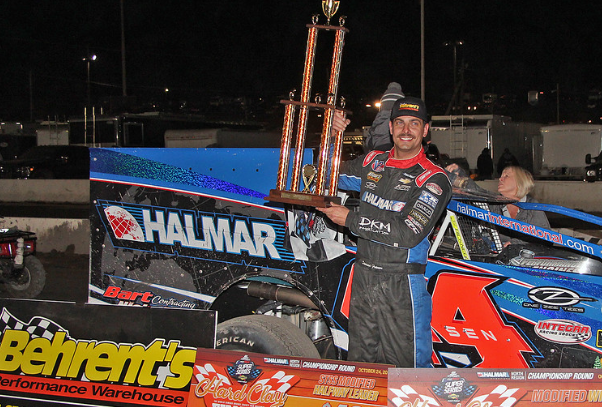 Friesen, of Sprakers, N.Y., rode the outside rim to a $10,400 victory in the Behrent’s Performance Warehouse ‘Hard Clay Finale’ at the Legendary House of Power in the eighth and final round of the Bob Hilbert Sportswear Short Track Super Series (STSS) Fueled By Sunoco Halmar International North Region.

A new record field of 89 competitors signed in for competition on the eve of Eastern States Weekend. Through eight heat races and three consolations, the starting field was trimmed to 32 for the 50-lap main event.

Friesen, by virtue of the redraw, started 12th on the field.

Andy Bachetti, a three-time series champion, was the dominant force early on. Bachetti launched into the lead from the outside pole and accrued a seven-second lead prior to the first caution on lap nine.

Michael Storms and a rim-riding Friesen emerged to race with Bachetti. On lap 17 Bachetti and Storms collided momentarily on the frontstretch. Friesen shot the gap on the inside lane and took over a lead he would never relinquish.

Friesen drove to his 17th career STSS victory, the most of any driver.

Larry Wight, making his debut for Delaware-based car owner Gary Simpson, throttled from 26th to chase Friesen across the line. Unfortunately for Wight, the No. 12K came up light on the scales and he was disqualified.

Anthony Perrego, who started 25th in Ray Graham’s No. 18, placed second, receiving $5,000 for his efforts plus $400 from Land Hoe Maintenance as the race’s Hard Charger.

Sheffield, Mass., resident Bachetti placed third, taking home $4,000. Sheppard, who started his championship drive from 13th, finished fourth and Billy Decker of Sidney, N.Y., advanced from 18th to place fifth in the Jeremy Smith Racing No. 91. Decker ran as high as second in the event.

Finishing sixth through 10th, respectively, were 10th-starter Jimmy Horton of Neshanic Station, N.J.; Mat Williamson of St. Catharines, Ont., in the Behrent’s Performance Warehouse No. 3; Billy Pauch Jr. of Frenchtown, N.J., from 21st in the Bill Pascual No. 3; Mike Gular of Boyertown, Pa., who nursed the Terry Fasnacht No. 2A home with a broken fan; and Erick Rudolph of Ransomville, N.Y., who started 28th.

Rapid Tire of Montgomery, N.Y., was the presenting sponsor of the 360 Sprint Car 25-lap main and the event was a thriller. Jordan Thomas, after trading the lead with Davie Franek, fought off the high-side advances of Billy Van Inwegen on the final lap to take the $3,000 victory.

Van Inwegen, who has vast Orange County experience in a Modified, found the extreme high line to his liking and swept past Thomas coming to starter Joe Kriss’ white flag.

The leaders raced side-by-side down the backstretch on the final lap. A slower car on the outside lane broke Van Inwegen’s momentum. Thomas won the drag race off turn four for the victory.

The complete weekend breakdown can be found at the following link: https://shorttracksuperseries.com/wp-content/uploads/2019/10/MidAtlanticChampionshipWeekendBreakdown.pdf

Did Not Start: Scott Flammer