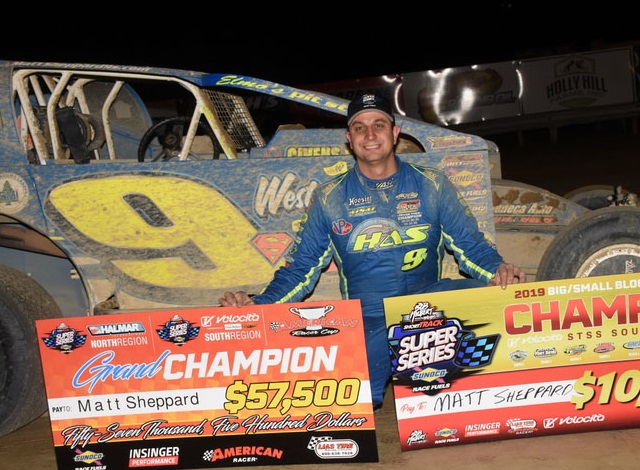 GEORGETOWN, DE – A feat many cited as insurmountable has been tackled by Matt Sheppard.

If one Modified driver was able to win the STSS Halmar International North Region, Velocita-USA South Region presented by Sunglass Central and Design for Vision and the American Racer Cup, Insinger Performance would kick in a $25,000 cash bonus.

On Saturday night at Georgetown Speedway, during the Mid-Atlantic Championship Weekend, Savannah, N.Y.’s Sheppard completed the trifecta, clinching the STSS Velocita-USA South Region title and the $10,000 that accompanies it.

A week prior, during the Behrent’s Performance Warehouse ‘Hard Clay Finale’ at Orange County Fair Speedway in Middletown, N.Y., Sheppard drove to a fourth-place finish and wrapped up the $12,500 Halmar International North Region crown.

On Labor Day weekend, ‘Super Matt’ secured the home-track American Racer Cup title utilizing Outlaw Speedway in Dundee, N.Y., as his Friday venue. He picked up $10,000 for the overall title and an additional $1,000 as the North Region champ for a total of $11,000.

Adding the $25,000 bonus from Insinger Performance, Sheppard will have $58,500 awaiting his arrival at the Short Track Super Series ‘Night of Champions’ Saturday, January 4, 2020 at the Bear Creek Mountain Resort in Lehigh Valley, Pa.

The $58,500 ‘Grand Champion’ take is the most lucrative championship in all of Northeast dirt Modified racing.

“They opened the door for me to run the Short Track Super Series South last year,” he said.

“It’s been a lot to make this all happen: the logistics of it all. This could be a deal that happens once in a lifetime.”

Sheppard’s numbers in all of the three programs were astounding.

Top Short Track Super Series competitors will be honored at the ‘Night of Champions’ on Saturday, January 4. Full information will be released in the coming days.