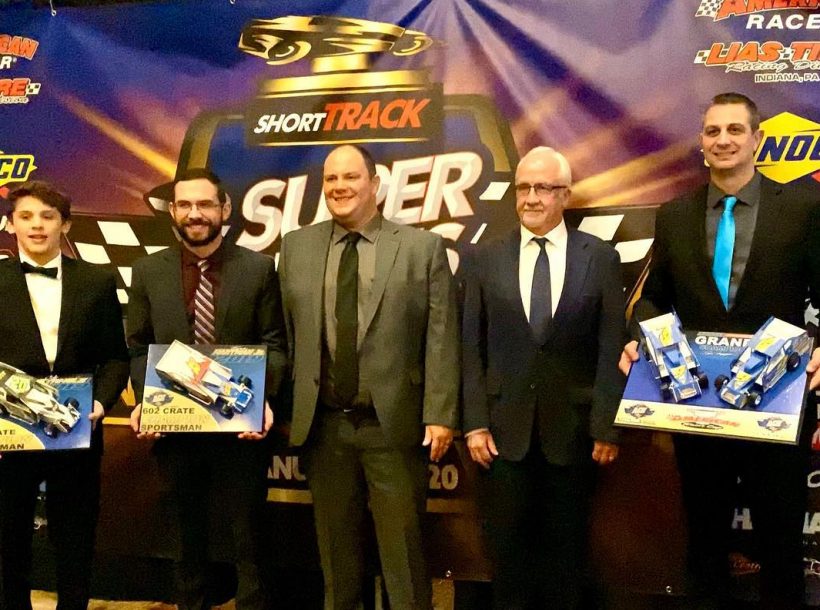 Bruce Insinger of Sunoco Race Fuels distributor Insinger Performance in Dushore, Pa., pledged a $25,000 bonus should one driver sweep the trio of titles. Sheppard cashed in just two years into the program.

The $58,500 ‘Grand Champion’ payday marked the most lucrative dirt Modified title in the country.

“There were a lot of moving parts to make this possible,” offered Sheppard, thanking primary sponsor Hurlock Auto & Speed and representatives on hand from several different states. “I told Bruce (Insinger), never challenge a racer, because we will find a way.”

“We knew what we needed to do,” Sheppard said. “But everything had to go our way and fall into place to get it done.”

STSS organizer Brett Deyo opened the evening with a review of the ’19 season. He cited several impressive statistics from the season. A total of 291 drivers attempted at least one STSS Modified event, with 232 drivers taking part in a Crate 602 Sportsman STSS-sanctioned race. An all-time-high 299 drivers registered for the American Racer Cup in its ninth year.

Sheppard’s six top-five finishes were enough to clinch the title by a margin of 42 points aboard the Hurlock Auto & Speed No. 9s.

Andy Bachetti of Sheffield, Mass., finished all eight North Region races inside the top-10 and picked up a win at Accord (N.Y.) Speedway. Bachetti finished runner-up in the standings, worth $7,000.

Eight events comprised the ’19 STSS Velocita-USA South Region presented by Sunglass Central and Design for Vision. Sheppard won twice – at Delaware International Speedway in Delmar, Del., in April and Big Diamond in June – and posted seven finishes inside the top-10.

He secured the title by merely taking the green flag in the finale at Georgetown Speedway, boasting a 107-point edge.

Tim Hartman Jr. of Niskayuna, N.Y., made a decision to chase STSS Crate 602 Sportsman North Region points in ’19. The choice paid off with four wins in five completed events. Hartman started the season with a victory at Thunder Mountain and followed with checkered flags at Fonda, Accord (N.Y.) Speedway and Afton.

Hartman took the title by a massive margin of 175 points and received $1,500 for his efforts for the Parillo Services No. 22 team.

The South Region Crate 602 Sportsman title was decided in November at Georgetown. When a number of contenders succumbed to misfortune, youthful Cole Stangle of Neshanic Station, N.J., persevered and took the crown.

Stangle earned two top-five finishes and four top-10s, ending the year with a 36-point edge. Stangle received $1,500 for the title.

STSS organizer Brett Deyo distributed a number of special awards during the ‘Night of Champions’ ceremonies.

The WELD Wheels Hard Luck Award recipients for the series were Danny Bouc (South Region) and Billy Van Pelt (North Region). Both drivers received a free WELD wheel for the “award no one wants to win.”

VAHLCO Wheels presented the South Region overall Hard Charger. Passing a total of 61 cars during the season, Sheppard was the recipient of four VAHLCO Elite Series wheels with a cash value of $1,400.

For his tireless work to revitalize Afton Motorsports Park, Ron Ford received the Short Track Super Series Promoter of the Year. After a dismal ’18 season, Ford resurfaced Afton and rebuilt the weekly car counts and crowds before hosting a highly successful Short Track SuperNationals 12 in October.

Terry Fasnacht, who fields the Conestoga Valley Custom Kitchens No. 2A driven by Mike Gular, was named STSS Car Owner of the Year. Fasnacht’s support allowed Gular to chase both the North and South Region championships for the second straight year.

The Dedication to the Series Award went to Andy Bachetti. Since winning the very first STSS event in April 2014, Bachetti has made the haul from Sheffield, Mass., to an astounding 73 of the 79 events run to date.

Mario Street, who not only travels to STSS events to assist with tech and pit duties but also puts in hours doing virtually any job at Georgetown Speedway, earned the Contribution to the Series Award.

The Flach Performance Products (FPP) radiator giveaway went to Craig Hanson via a drawing of the top-12 Modified drivers.

The Henry’s Exhaust drawing recipient was Billy Van Pelt for an exhaust system.

A number of door prize giveaways and music from DJ Jammin’ Jimmy Payne rounded out the evening.

Attention now turns to the inaugural ‘Sunshine Swing’ at All-Tech Raceway in Lake City, Fla., Feb. 5-8, 2020 with both the STSS Modifieds and STSS Crate 602 Sportsman in competition.