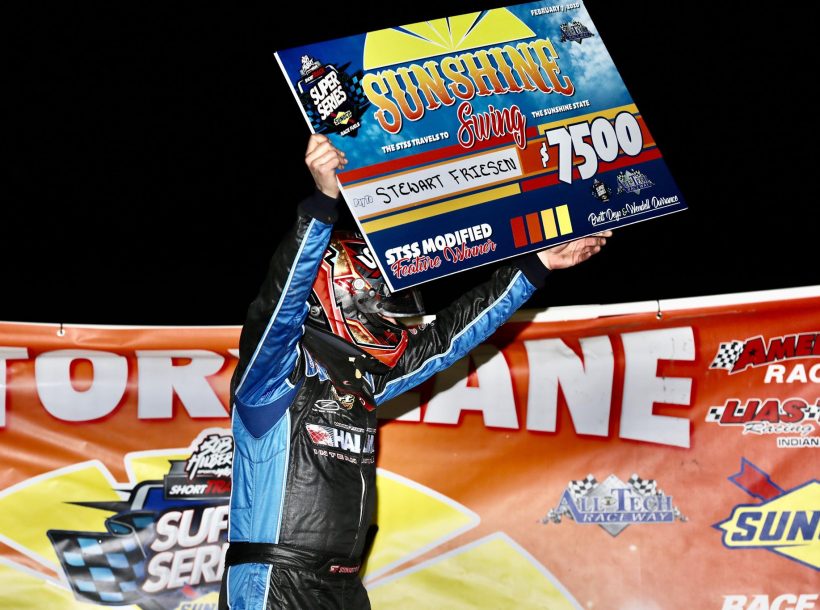 The “Friesen Sweep” at earned him a total of $12,500 after the first two races of the STSS maiden voyage to Florida.

After Mother Nature intervened on Thursday night, the STSS crew gave the Florida faithful a double program for Friday night, and it lived up to the billing.

Friesen started the first feature on the pole starting position after the Beyea Custom Headers redraw with Phoenix, N.Y.’s, Larry Wight starting alongside.

Friesen would grab the early lead while Wight followed in toe as the guys continued learning the new track.

Waterloo, N.Y.’s, Matt Sheppard had quickly climbed from ninth and into the top five.

After a yellow on lap 13 for Queensbury, N.Y.’s, Demetrios Drellos slowing on the backstretch, things got interesting.

Friesen elected to restart on the bottom, giving Wight the top, and Wight took advantage, taking the lead at the exit of turn two. Two laps later, another came out giving Wight lane choice on the ensuing restart.

To everyone’s surprise, Wight chose the bottom, despite taking the lead from the top side on the previous restart. Friesen took advantage, snatching the lead back from Wight.

While the leaders traded spots back and forth, Saint Catherine’s, Ontario’s Mat Williamson had gone from fifth to third on the two restarts, and was challenged Wight for second the next several laps.

Another yellow on lap 24, gave us another double file restart, and again Friesen, the leader, chose the bottom. This time, it worked for him, as he maintained the lead.

It was “Money” Mat, grabbing another spot on a restart, this one moving him into the runner-up spot.

Another yellow two laps later would result in a single-file restart, but Williamson couldn’t do anything with Friesen, as he coasted to his 18th career STSS win.

The second feature, 40 laps in distance, would not come as easy for Friesen. The fans in attendance and tuning in on Dirt Track Digest TV were treated to a phenomenal race. Matt Sheppard had the pole starting position, along with Watertown, N.Y.’s Billy Dunn on the outside.

Dunn would grab the lead with Sheppard, and Friesen following in toe. Mat Williamson was the man on the move, as he had climbed from seventh to fourth and was catching the top three.

On lap 10, things went haywire at the front of the field. The top four traded spots back and forth while working in lap traffic. At one point, Matt Sheppard went from the lead to fifth in a lap and a half. Billy Dunn lost the lead and gained it back twice in the commotion up front.

A lap 15 yellow gave the field a chance to reset after Milford, Del.’s Jordan Watson got into the wall on the backstretch after being three-‘wide with the two leaders.

On the restart, Dunn would lose the lead for good, as Williamson took the lead from the outside and Dunn could never get it back.

Erick Rudolph was another driver making moves, coming from his 22nd starting position, the Ransomville, N.Y. driver had climbed into the top 10 and was still advancing.

Lap 23 Stewart Friesen went to the outside and began to pressure Mat Williamson, before taking the lead on lap 27.

However, the fight wasn’t over, as Williamson moved up to the outside to follow Friesen as the outside groove became the preferred groove among majority of the drivers in the top 10.

A lap 34 yellow presented Friesen with another choice, this time, he chose the top. Williamson threw everything but the kitchen sink at Friesen but never could get by, as Friesen walked to his second win of the night.

Friesen would say a farewell to his friend Jake Marine, who passed away on Wednesday afternoon, in victory lane following the feature. “We’d always end up BS’ing in the trailer until 2 in the morning at Volusia.”

Mat Williamson would take his second runner-up finish of the night. Anthony Perrego made a charge late to grab the third spot with Matt Sheppard finishing fourth, and Erick Rudolph coming all the way from 22nd to a top five.

The Crate 602 Sportsman feature were also swept, but by a pair of brothers as Michael and Tony Ballestero won each of the 25 lap main events, picking up $1,250 apiece plus the Evergreen Fuels Inc. bonus cash.

In the first feature, Michael Ballestero, of Saratoga Springs, N.Y., would start in fourth and passed Brian Sadler at the halfway point and never looked back. Sadler who led the entire first half of the races car went away from him as the race went on.

Cresco, Pa.’s, Grant Hilfiger made a charge from his twelfth starting spot grab the runner-up spot. Tony Ballestero, of Ballston Spa, N.Y., would come from 11th to third. Niskayuna, N.Y.’s, Tim Hartman Jr. came home fourth and Kevin Chaffee of Bradford, Vt., would round out the top five.

In the second feature, Tony Ballestero would again come from 11th, this time to win a thrilling three-car battle with Grant Hilfiger and Tim Hartman Jr. At one point the three were side-by-side for the lead, with Ballestero passing both on the bottom.

The “Sunshine Swing” concludes Saturday night with the Modifieds running 50 laps for $10,000 to win and the Crate 602 Sportsman running 30-laps for $1,500 to win. The event will again be carried live on Dirt Track Digest TV. Gates will open at 3 p.m. with hot laps beginning at 6 p.m.

Complete race weeklong race information can be found on the series website: http://shorttracksuperseries.com/wp-content/uploads/2020/01/Sunshine-Swing-Agenda.pdf

Did Not Start: Mike Gular.