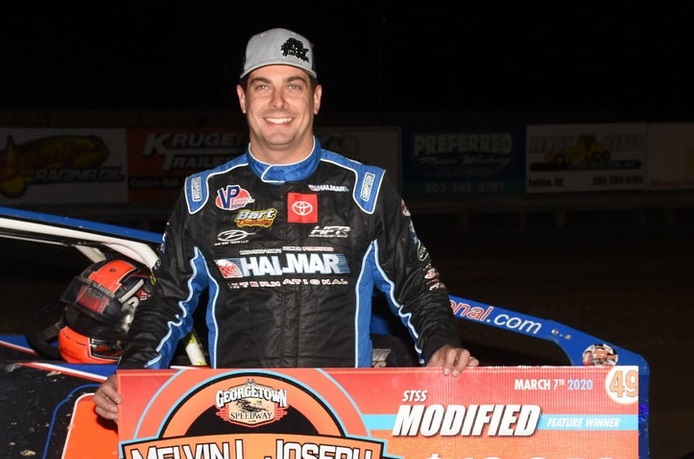 Friesen mentioned the word “fast” several times in victory lane. He and Boyertown, Pa.’s Ryan Watt set a blistering pace for much of the 49-lap affair in the Northeast Modified 2020 Season Opener.

It was Watson, who used the outside to jump out the initial lead. The lead was short-lived however, Watson’s night would end four laps in due to a broken rear end. The beneficiary would be Watt, who inherited the lead.

The first 10 laps went caution-free, as Watt and Friesen battled through lapped traffic while Rick Laubach, of Hellertown, Pa., quickly climbed to the third spot and was beginning to reel in the leaders. Frenchtown, N.J.’s Billy Pauch Jr. was putting on a show as well, coming from 14th to seventh in the short 10 laps.

The ensuing restart however would end Laubach’s charge as his engine expired as well with 11 laps in.

A lap-14 restart would end the night for several top-running cars, including Milford, N.J.’s David Van Horn, Middletown, N.Y.’s Anthony Perrego, and Oley, Pa.’s Duane Howard. Others were involved but returned to action.

Following the multiple restarts between laps 10 and 15, a long green-flag run allowed Watt and Friesen to flex their muscle as the two pulled away from the rest of the field. However, they never left each other, with Friesen staying within five car-lengths of the leader.

Right at the 30-lap mark, things began to change. Watt’s car began to push through the corners, ultimately coming the on lap 35. Watt washed up the track hard in turns three and four, allowing Friesen to drive underneath Watt and drive away.

Watt’s push persisted until the front end, along with Watt’s night, ultimately went by the wayside on lap 42 due to a broken bolt on the Ron Roberts-owned No. 14W.

The remaining seven laps undoubtedly belonged to Friesen, as he pulled away from Oley, Pa.’s Craig Von Dohren, who took a back-and forth night to a runner-up finish in his self-owned No. 1c big-block-powered ride.

Wallkill, N.Y.’s Tyler Dippel, making his first run at a full-time STSS schedule, kicked it off with a third place run. Billy Pauch Jr. continues to be strong at Georgetown after a great 2019 at the speedway, grabbing a fourth-place finish in his Rick Holsten-owned ride. Pipersville, Pa.’s Danny Bouc, in his Craig Pondish-owned No. 6, rounded out the top five.

Phoenix, N.Y.’s Larry Wight rebounded from heat race troubles to a sixth-place finish aboard the Gary Simpson No. 12K. Jordan Watson, of Milford, Del., also had heat-race that he parlayed into a seventh-place run after taking a series provisional and starting 29th. Neshanic Station, N.J.’s Jimmy Horton fought hard for an eighth-place finish. Sewell, N.J.’s Richie Pratt Jr. was involved in a restart pile-up but fought back to a ninth-place run and former Georgetown Speedway Sportsman winner Alex Yankowski rounded out the top-10.

In the Crate 602 Sportsman feature, Pennsylvania’s Jim Housworth avenged his heartbreak from last November at the Georgetown Speedway. Housworth lost a close battle for the STSS championship in the finale.

This time, Housworth bested a 47-car field to get his first Georgetown win and the $1,490 payday. Scott Hitchens, would follow Housworth closely, but never quite could catch the leader, ending in a runner-up finish.

Joe Toth would kick off his 2020 season with a podium run, while Sammy Martz Jr., and Jeff Brown rounded out the top-five.

Chris “Tippy” Martinez dominated the Delmarva Charger feature, his second consecutive Georgetown win, dating back to November. Ashley Merritt and Chris Carroll would round out the podium.

Andy Cassel won the modified portion of the Southern Delaware Vintage Stock Car Club in the 12-lap feature. David Tucker I was also a winner, being the highest finishing sportsman driver and fifth overall.

Did Not Start: Bobby Flood