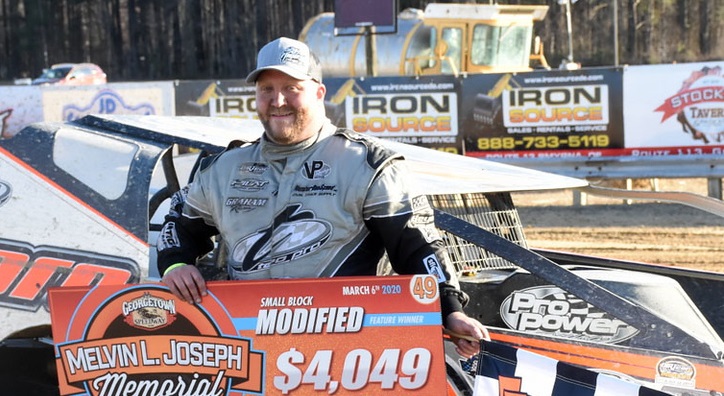 But Billy Dunn felt right at home Sunday afternoon in Victory Lane in the First State.

Dunn, who lives on the New York side of the Canadian-U.S. border, invaded Georgetown Speedway for the Melvin L. Joseph Memorial. After suffering some misfortune on Saturday, he recovered with a Small-Block Modified triumph on Sunday afternoon, earning $4,049 for his efforts in the 30-lap main event.

Dunn, driving the Ray Graham-owned No. 49, parlayed a sixth-place starting position to victory in a thrilling race that was completed in just over 12 minutes.

Friday’s event was pushed back to Sunday after day-long rain doused the speedway on what was to be the first race day of the weekend.

Maryland’s Jeff Brown led the field to the green flag but the caution appeared quickly when Craig Von Dohren’s No. 30 went up in smoke. That was ultimately the race’s only yellow flag.

Brown paced the field on ‘Take 2’ while passing was prevalent on a multi-groove daytime surface.

Anthony Perrego, who started 10th, was the first to make a charge to the front. Perrego arrived in second spot on lap 14 in the Brian Smith-owned No. 44. Perrego ended up over the top of turn three while challenging for the lead two laps later and had to regroup in the second half of the top-10.

Dunn then moved in to pursue the lead pair of Brown and Richie Pratt Jr.

On lap 17, while Pratt was vying for the top spot, Dunn completed a two-for-one pass and put his Pro Power Racing Engines Teo-Pro Car into the top spot.

But the racing was far from over. Boyertown, Pa.’s Ryan Watt, who started 16th, cracked the top-five with 10 laps remaining.

The ‘Electric Company’ took third on lap 23 and second with the white flag in the air, setting for the runner-up spot.

Pratt, of Woodbury Heights, N.J., settled for third, followed by Stewart Friesen of Sprakers, N.Y., who started 18th on the grid, and 11th-starter Larry Wight of Phoenix, N.Y., in the Gypsum Racing No. 99L, edging out Perrego.

After an ignition box went sour moments before the main event, Billy Pauch Jr. started 26th in the Rick Holsten No. 96 and ran as high as fourth before slipping over the top of the banking and settling for seventh.

Matt Hill lived up to his nickname in a thrilling 20-lap RUSH Late Model feature. Hill, who lives within earshot of the speedway in Georgetown, survived numerous restarts and challenges courtesy of his friend Amanda Whaley.

Hill launched off the pole via a redraw of top qualifiers. Whaley, meanwhile, started from eighth position in the No. 4. Whaley found the outside lane of the half-mile to her liking and drove to second by the race’s midway point.

Whaley made several runs at Hill during the final 10 laps but settled for a runner-up finish.

A complete resurfacing of the speedway began on Monday with more than 150 loads of fresh clay being spread on the half-mile oval.