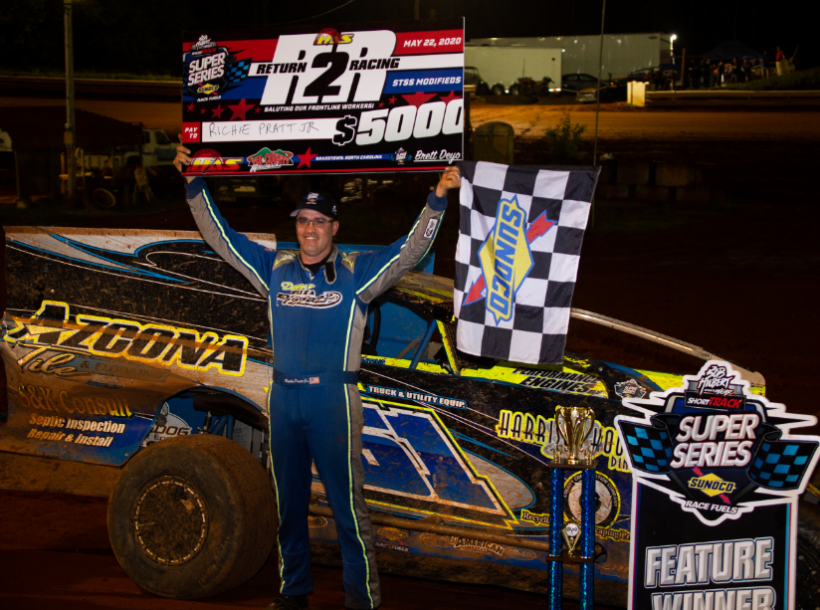 Stewart Friesen picked up where he left off Thursday night, leading the way at the start of Friday’s 50-lap feature and leaving Richie Pratt and Tyler Dippel to battle for second.

That battle didn’t last as long as hoped, as Dippel went around on lap five. A big pileup on the restart sent Larry Wight’s brand new Teo Pro Car flipping in its first event, but Wight continued on track and Friesen continued to lead.

Billy Pauch Jr. and Matt Sheppard were on the move, with Pauch slotting into second by lap 10 and Sheppard up to fourth before a lap 15 caution.

Friesen continued to be blisteringly quick up top, setting the pace again on the restart. Pauch, Sheppard, and Umbenhauer kept Friesen honest in traffic, but traffic flipped the race on its heels at halfway.

On lap 24, Tyler Dippel ended up sideways in turn three, and the entire top four of Friesen, Pauch, Sheppard, and Umbenhauer all ended up in it.

“Believe it or not, when I was following Friesen, he taught me how to drive the track a little better, and that helped when we got out front again,” commented Pratt. “We ran a good race, and I can’t believe we’re here.”

While Tyler and Creeden fought tooth-and-nail for second, Pratt had none of it and drove away. Yankowski, Modified sophomore, held close to the battle for second, but Pratt’s lead continued to grow through lapped traffic.

By the time Jessica Friesen broke and drew a caution on lap 39, Pratt was up by over a straightaway.

Creeden was the big loser on the restart, dropping a couple spots on the green. Yankowski was the big winner, slipping into third and then disposing of Tyler for second on lap 42.

Pratt had jumped out to a two-plus second lead on the initial green, but once in second, Yankowski closed in. By lap 47, Yankowski was within a couple car-lengths, but both drivers were wide open around the top.

Wight’s battered car finally gave out with three laps left after a respectable drive back into the top ten, placing Yankowski right on Pratt’s tail. The pair hung status-quo on the single file restart, but a crash involving Creeden, Schilling, and Britten drew the yellow on the final circuit.

Despite an increasing amount of smoke from his car, Pratt was unfazed on the restart, gapping Yankowski to score the $5,00 payday at Tri-County Racetrack.

Heavy afternoon rains made an already fast track even faster, with times barely slowing down throughout the night. The result was a tall physical toll on the drivers and their equipment.

“I’m definitely out of shape, I’m whooped right now,” noted Pratt. “Under those long green flag runs I was having a hard time keeping my head up. My shield was fogging up and everything but we made it, I have to thank my crew because they spent all night putting this thing back together after ending up on our side last night. I was told I was smoking when I got out of the car, but nothing on the gauges. We’ll take a look at that, and see if we have to switch to the other car tomorrow.”

“Long runs we had a good car,” said Yankowski, “On the restarts I just wasn’t in the right spots and that hurt us. We found a little bit of an issue after last night, got it fixed, and we’re happy with the results. We were good the whole race, we just needed to find a little bit of clean air. This track is different, I’ve only been to Fulton once and this reminds me a little bit of it, but this is really a whole new animal.”

Friesen led the first half of the event, but was caught up in a wreck with the other frontrunners. Unlike last night, Friesen wasn’t able to reach the lead after the incident, but still drove back to a podium.

“Sometimes that how it goes,” Friesen stated. “Modifieds on this bullring are crazy. It was fun to come down here and check out a new part of the country and get some racing in. We’re looking forward to heading to ‘the place your mama warned you about,’ Cherokee, another new place. Our car is kind of in one piece, we’ll be ready.”

Did Not Start: Billy Van Pelt