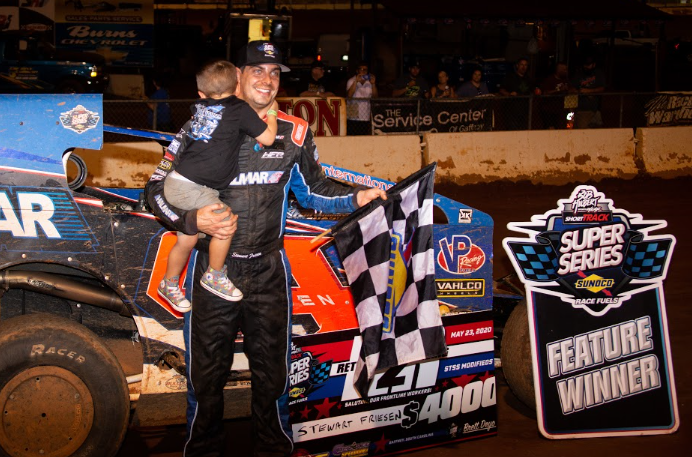 GAFFNEY, SC – Stewart Friesen has had a great week in the Carolinas, capping off the weekend with a Short Track Super Series win at Cherokee Speedway after a tough battle with Larry Wight.

It was Friesen’s second win in three days and gave him three podium finishes and a nice $4,000 check.

The event at the Gaffney, S.C., facility was broadcast live on Dirt Track Digest TV and run before large crowd spread around the facility.

A rough start to the 40-lap feature meant polesitter Larry Wight had to fend off front row partner Erick Rudolph multiple times in the first laps, with multiple restarts in the early stages.

Alan Johnson slipped by Rudolph to grab the runner up spot early, with Friesen following suit into third. While Wight cruised out front, Friesen stalked Johnson and snagged second on lap eight.

Unfortunately, Johnson slowed to a stop on lap 10, ending his strong run a quarter of the way into the event. Wight’s unchallenged experience out front was over, as Friesen latched onto Wight’s rear bumper on the restart.

With Wight down low, Friesen tried lower, then switched to the top near halfway. After a couple close bids on the cushion, Friesen dropped low once more, trying to pry Wight off the lightning fast bottom lane.

On lap 28, Friesen did so, getting under Wight and getting the lead. With the leaders in traffic, Wight didn’t drop off of the pace nor give Friesen an ounce of breathing room.

“Larry was doing a good job out there,” Friesen said of the battle. “I don’t know whether it was rubber or just the abrasion of the surface, but the bottom was super gripped up. I tried to roll him up top, I was pretty good up there in three and four, but he slipped up and I got him on the bottom.”

However, Friesen held the point as the laps wound down, working lapped cars methodically. With five laps left, Anthony Perrego slowed with a flat tire, drawing the yellow and removing the traffic the leaders had been dealing with.

Friesen snuck away on the late-race restart, leaving Wight to fend off Rudolph. Wight surrendered second to Rudolph in the final circuits, allowing Friesen to cruise to his 22nd career Short Track Super Series victory at Cherokee.

Rudolph had the rebound of the week. On Thursday, Rudolph had a car on top of him, and Friday saw a mediocre run. Rudolph ends the week with a strong second place, moving forward.

“The first night didn’t go good, and last night wasn’t much better,” stated Rudolph. “At least we finished last night, but we finished really good tonight on the podium. The bottom was the place to be, and Larry slipped up at the end and we were able to capitalize. Overall it was a good race and maybe someday we’ll be back.”

While Wight led over half the race and finished podium, he noted the result didn’t come easily.

“I couldn’t rotate the bottom good enough to stay tight to the wall,” Wight said. “Three and four I could stay right on the berm, but I knew he would be right there hounding me. The way the water was down there, as soon as I touched it I’d lose the nose, I couldn’t run through it like these guys were. With the 360 motor and everyone the same weight, we were down probably 100 horsepower, but we’re swapping our big motor into this car and try again next week.”

Peter Britten had his best run of the week finishing in fourth and earned $1,556 for the Marcia Wetmore Perseverance Award raised by the racing community in her memory, while Danny Creeden finished in fifth.

In the 602 Sportsman feature, Tim Hartman Jr., outraced Brian Calabrese for the victory in the 35-lap affair.  Hartman worked forward from seventh.  He first took second from Eric Kormann before making a mid-race charge to get by Calabrese for the $1,500 win.

Did Not Start: Greg Nailor