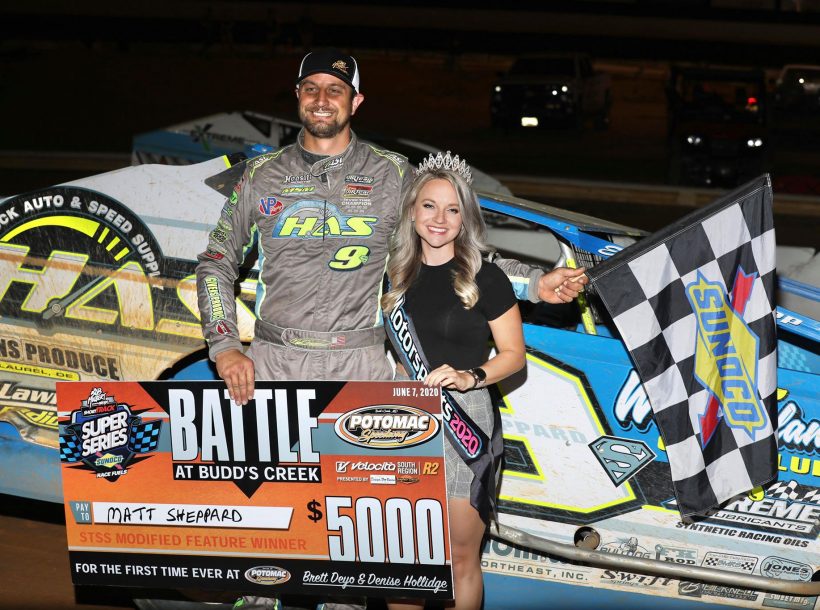 BUDD’S CREEK, MD – Matt Sheppard got off to a rocky start in 2020, but things are starting to turn around for the Savannah, N.Y., driver.

“The beginning of that was scary,” Sheppard said. “We’ve been to a few of these bullrings recently, and these cars keep getting more exotic and harder to drive, and cars are just all over the place.”

Points racing for the STSS Velocita-USA South Region presented by Design for Vision and Sunglass Central resumed three months to the day after the opener on March 7 at Del.’s Georgetown Speedway. Both the STSS Modifieds and Crate 602 Sportsman were in action on the high-banked Potomac three-eighths-mile.

A very healthy crowd took in the series debut at the speedway operated by the Hollidge family.

Following the Beyea Custom Headers redraw, Stewart Friesen led the field to the green in the 50-lap feature, with Billy Pauch Jr. stalking him in the opening laps, cautions, and restarts.

A lap-four restart saw Pauch sneak by Friesen to take the lead, but never had time to put any distance between himself and Friesen through the rash of yellows.

Behind the top two, Larry Wight had climbed to third, while Sheppard – who started ninth – recovered from a sketchy start to sit fourth by lap 10.

A rocket restart sent Sheppard to second on lap 11, while Friesen was left to fend off Wight. While Pauch got a good jump on the green, Sheppard quickly erased his gap, diving low and taking the lead on lap 15.

“Even though it was scary at the start, we were able to get up through there into the top-four and really show off our good race car,” stated Sheppard.  “We’ve been rolling good since Chatham (an unsanctioned event in Louisiana at the end of May).”

Meanwhile, Friesen regained his footing, sliding by Pauch for second with 19 circuits in.

Sheppard held a steady two-second advantage over Friesen at halfway, but traffic was awaiting the leaders on the fast third mile.

By lap 30, Friesen cut the lead in half, but Sheppard worked a group of lapped cars to perfection. Friesen got hung up, and Sheppard reinstated his original advantage.

On lap 35, David Van Horn broke and slowed for a caution, erasing both the traffic and Sheppard’s lead.

In clean air, Sheppard dropped the hammer and gapped Friesen by almost a straightaway in short notice.

One final yellow on lap 42 gave Friesen, Pauch Jr., and Wight a last swing at Sheppard, but Sheppard aced the restart and pulled away.

While Sheppard’s lead during the final laps was significantly slimmer than the prior run, it was more than enough, as Sheppard was the first under the checkered flag to score his first Short Track Super Series win of the season worth more than $5,000.

Friesen, of Sprakers, N.Y., started pole and led the first trio of laps, having a see-saw race that ended with a second place run.

“Billy (Pauch) Jr. snookered me on that restart and got around me,” noted Friesen. “I stayed with him and tried the same move he pulled on me but it got too dusty up there. At the end of the day, Sheppard had us covered. This place was probably most close to Chatham out of all the new tracks we ran, and he stomped us there.”

New Jersey’s Pauch Jr. kept up his speed from the Carolina swing, but this time had little bad luck to hold him down, finishing tonight in third driving Rick Holsten’s No. 96.

“I got Stew up top on a restart, I figured he didn’t know that and I got a good run down the hill,” stated Pauch. “These guys are just a little bit better in the black than I am, I can hang in the brown but they got me by a little when it gets dark. Those two have us covered right now, but we’ll keep digging.”

Mike Gular ran a strong race finishing in fourth in the Terry Fasnacht No. 2A and Larry Wight held on to round out the top-five in Gary Simpson’s No. 12K.

In the accompanying Short Track Super Series 602 Sportsman feature, Tim Hartman Jr. of Niskayuna, N.Y., took full advantage of his pole starting position.  Hartman took the lead after early after a brief battle with Scott Hitchens.  From there, Hartman survived numerous restarts in the rough and tumble 25-lap feature.  He was perfect throughout in his run to the $1,500 payday.

It was Hartman’s second win of the season with the series, having topped the non-points event at S.C.’s Cherokee Speedway on May 23.

Hitchens stole the second from Jim Housworth in the closing laps and finished there while Housworth locked down the third spot.  James Hill crossed the line fourth and Brad Roberts came from mid-pack to finish fifth.

Did Not Start: Richie Pratt Jr.