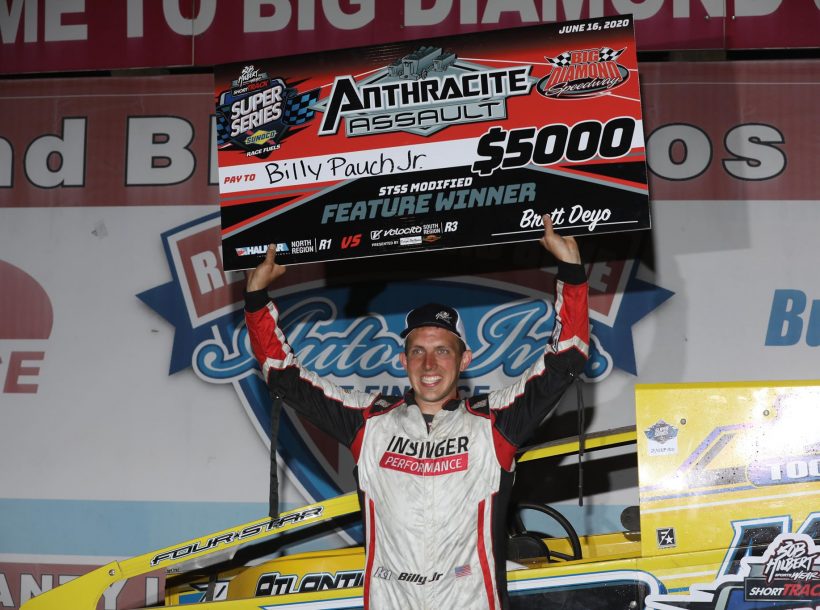 The $5,250 win is Pauch’s third with the STSS, going along with victories in 2016 and 2019. The Big Diamond win marks the third track – and state – the Milford, N.J., driver has conquered with the series.

A large crowd took in the event, which features the only combined STSS Modified Velocita-USA South Region presented by Design for Vision and Sunglass Central and Halmar International North Region point event of the season.

Horton and Pauch led the field to the green for the 50-lap main event following the Beyea Custom Headers Redraw, with Horton getting the best of Pauch at the start. The early stages of the event were slowed by cautions, notably a lap three red flag for Stewart Friesen flipping, and a lap seven yellow for Matt Sheppard breaking. Following a lap 11 multi-car tangle, the race finally got a green flag feel.

Horton and Pauch separated themselves from third place Mike Gular, who was under heavy pressure from Ryan Godown. After a battle, Godown took third from Gular on lap 16, but was already three seconds behind the top two. Up front, Horton had a steady one-second lead as the race neared halfway, but traffic on the three-eighths-mile oval was soon to plague the frontrunners.

While Pauch initially closed in at halfway, Horton worked traffic masterfully to reestablish a comfortable gap. A bobble on lap 30 erased any comfort Horton had, but as before, Horton pulled away. With fifteen laps left, Horton looked strong and steady out front.

On lap 39, Horton hopped the cushion while working over a lapped car, and Pauch jumped at the chance. Pauch dove low while Horton struggled to regain his footing, with Pauch taking the lead.

Pauch’s Rick Holsten-owned No. 96 ran away once he got clean air, but a lap 41 yellow for third place Godown halted his pace. This put Gular back in third, and Horton was left to fend off Gular on the restart. Pauch darted away, but a final yellow on lap 46 set up a single-file restart.

Pauch went high, Horton higher, and Gular low, but all three cars were essentially matched on speed. After a flawless final laps, it was Pauch grabbing his third STSS Modified win in the 50-lap Anthracite Assault.

“I was starting to catch him a little bit, I was riding around for a while there saving my stuff,” Pauch Jr. said. “Jimmy is phenomenal, him and my dad (Billy Sr.) are the best in the business in my book, so it was awesome to see him run well and battle with him. I knew I had to get on it after Mike Mallett (from Dirt Track Digest) was telling me how hard I’ve stepped on it twice this week. There’s a lot of people here tonight, I’m glad dirt racing is continuing to thrive though all of this. I’m thankful for a lot of people, I’m just happy to be here.”

Horton was credited with 39 laps led on the evening. While second is a strong run paying $3,000, Neshanic Station, N.J.’s Horton was understandably disappointed after not leading the most important lap driving the Halmar International No. 43.

“We got a little loose at the end,” Horton stated. “We got into traffic and they were in our way some. We had to search for a way by, and we killed our tires searching. Sometimes it’s better to be second, and we have to get a little better ourselves. Even then, this is the best we’ve been in some time.”

Gular, of Boyertown, Pa., spent much of the race in fourth, but slipped into third after Godown’s issues. While Pauch and Horton ripped the top, Gular was way down low at the end of the event and nearly stole some extra spots driving the Terry Fasnacht No. 2A.

“I was hoping the top would get wide, but it didn’t get wide enough,” said Gular. “We were digging on the bottom, but we just didn’t have quite the car we needed to win. Finding the last little bit to get those wins is hard, and that’s what we’re looking for.”

Wallkill, N.Y.’s Tyler Dippel drove the Bill Pascual-owned No. 3 from 15th on the grid to finish fourth and Richie Pratt Jr. of Woodbury Heights, N.J., completed the front five in the Daniel Sommeling No. 51.

Finishing sixth through 10th, respectively, were Jeff Strunk of Boyertown, Pa., in the Glenn Hyneman No. 126; Andy Bachetti of Sheffield, Mass., after running inside the top-five; David Van Horn Jr. of Ringoes, N.J.; Jared Umbenhauer of Richland, Pa., driving for Rick Clay after starting 29th (dead last) on the field; and Mike Mahaney of Kings Ferry, N.Y., aboard the Olum’s No. 33.

Tim Hartman Jr. took an unexpected victory in the accompanying 25-lap STSS Crate 602 Sportsman main event. Hartman Jr. started 18th and was involved in an early race tangle. However, a number of cautions played into the Niskayuna, N.Y., driver’s hands as he advanced back through the field in a rough-and-tumble 25-lap main.

Delaware native White was searching for his first-career STSS victory and had led the race from the outset, ultimately settling for second. Joe Toth, who made a go-for-broke topside charge on the final restart, Sammy Martz Jr. and Danny Buccasfusca completed the front five.

The next scheduled event for the STSS is Wednesday, July 1 at N.Y.’s Fonda Speedway featuring both the STSS Modifieds and STSS Crate 602 Sportsman of the Halmar International North Region.

Big Diamond Speedway is a three-eighths-mile clay oval located in Minersville, Pa., just miles from Pottsville. The facility offers free parking, state-of-the-art concession areas and restrooms and not a “bad seat” in the house, with hillside grandstands overlooking the on-track action. The speedway GPS address is 392 Forest Lane Pottsville, PA 17901. The official website is www.bigdspeedway.net.