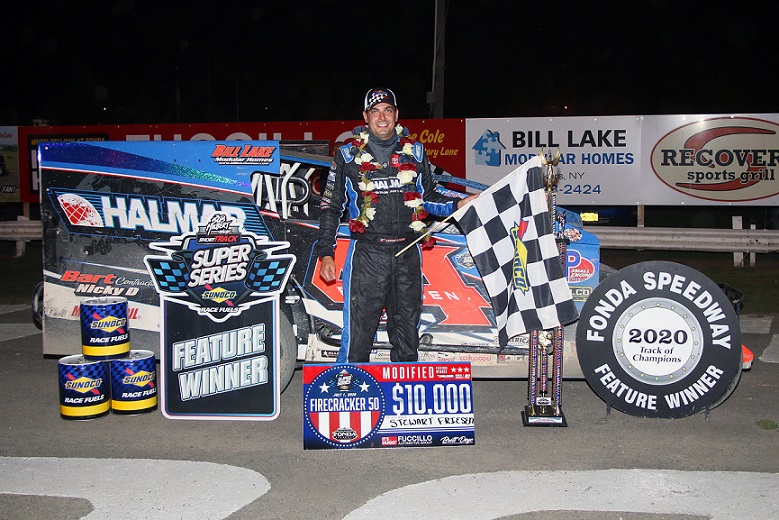 After an early battle with Adam McAuliffe, Sprakers, N.Y.’s Friesen ran away and hid from Larry Wight down the stretch in the first Modified series event contested on New York State soil this season.

Friesen and the Halmar International No. 44 team swept the Fonda weekend, scoring a $4,000 victory Saturday night in the ‘Firecracker’ prelude.

McAuliffe got the best of Mike Maresca at the start of the 50-lap main, with Matt DeLorenzo and Friesen going at it for third.

Friesen, who started fifth via the Beyea Custom Headers Redraw, took third with five laps complete, rim-riding the top while most preferred the bottom. Friesen wasn’t done after DeLorenzo, taking second from Maresca a lap later. McAuliffe, a Modified rookie, showed great pace early, having built up a three-second gap by the time Friesen got to the runner-up spot.

By lap 10, Friesen had cut McAuliffe’s lead in half, and McAuliffe was about to hit traffic. With added traffic, the lead shrunk even quicker, with Friesen at McAuliffe’s bumper by lap 12. One circuit later, McAuliffe grabbed some water on the bottom of turn four, slid up the track, and Friesen got by.

McAuliffe wasn’t going away quietly, drawing even with Friesen on lap 15. Friesen cleared McAuliffe the next turn, only for the first yellow of the event for a slow car to halt their battle. On the restart, Friesen was done socializing and immediately put distance between himself and the pack.

As the Upstate Automotive Halfway Mark looked, Wight was making some hay, all alone on the cushion and gaining time, getting by DeLorenzo to slide into fourth. Friesen’s lead grew to a straightaway over McAuliffe, the gap stabilizing in traffic. A lap 26 yellow for Billy Decker’s tire and damage while running fifth gave the field a chance to reset.

With the top-three headed to the bottom on the restart, Wight went to the top and flew to second. Matt Sheppard entered the top five for the first time in the event, but up at the top of the scoreboard, it was all Friesen.

The new runner-up didn’t change much in the battle up front, with Friesen re-establishing his comfortable advantage fast. With ten laps to go, Friesen was working through traffic with ease.

A monster restart by Friesen sealed the deal right off the green, but action was picking up behind him. Wight held ground, but Maresca had a challenge for McAuliffe, and Jessica Friesen was going after Sheppard.

A perfect set of laps to end the race was the golden ticket for Stewart Friesen, as he dominated the ‘Firecracker 50’ and took his fourth Fonda win of the year. Phoenix, N.Y.’s Wight came home second driving the Gypsum Racing No. 99L, with Maresca, McAuliffe and a charging Jessica Friesen completing the front five.

“We just stuck with our game plan and went with what we had in mind coming into this,” said Friesen. “We got a little nervous before the race thinking of what tire to pick, but it worked out as the track got pretty ‘glazey’ and we picked the right tire to stay under us.

“This race is dedicated to our friend Mike Cole, he was a great friend of us personally and Fonda Speedway, so it was extra cool to get a win for him.”

Wight’s journey to the front was a bit longer, starting ninth as opposed to Friesen’s fifth. With a bigger motor than many between the frame rails, Wight went good on the glassy slick Fonda surface.

“We had a big-block in tonight and I think we were hooked up for that motor combo,” Wight said. “It’s tough racing against Friesen here, you can put him in a wheelbarrow and he’ll still be hard to beat. A good night, we’ll see where we end up next week as it’s we’re guessing what the state will do.”

Maresca started pole and dropped back some during the event, but made some ground late in the event to get on the podium, adding another strong run to his Fonda resumé this season.

“I’m happy with it,” Maresca noted. “Running behind these two is always a good sign, they’re real fast. We had a solid car tonight, but I know what I can do to make it a little better. We don’t get to race a lot of these big shows, so it’s always awesome to run this good when we do.”

Fonda regular Chad Edwards drove the John Kollar No. 10% to a $2,060 victory in the STSS Crate 602 Sportsman North Region 25-lap lid-lifter. It was an outstanding performance for Edwards, topping an event that ran from green-to-checkered without a caution flag.

The STSS returns to action on Sunday, July 19 with a Velocita-USA South Region stop at BAPS Motor Speedway in Newberrytown, Pa., for the Modifieds (50 laps, minimum $5,000 to win) joined by the Central PA Legends Cars. Complete information will be released in the coming days.

Since 1953, the ‘Track of Champions’ Fonda Speedway has hosted the best in stock car racing. Under the management of BD Motorsports Media LLC, the speedway will operate weekly on Saturday nights from April through August plus several special events. Fonda Speedway is located on the Montgomery County Fairgrounds off New York State Thruway Exit No. 28 at 21 S. Bridge Street Fonda, NY 12068.