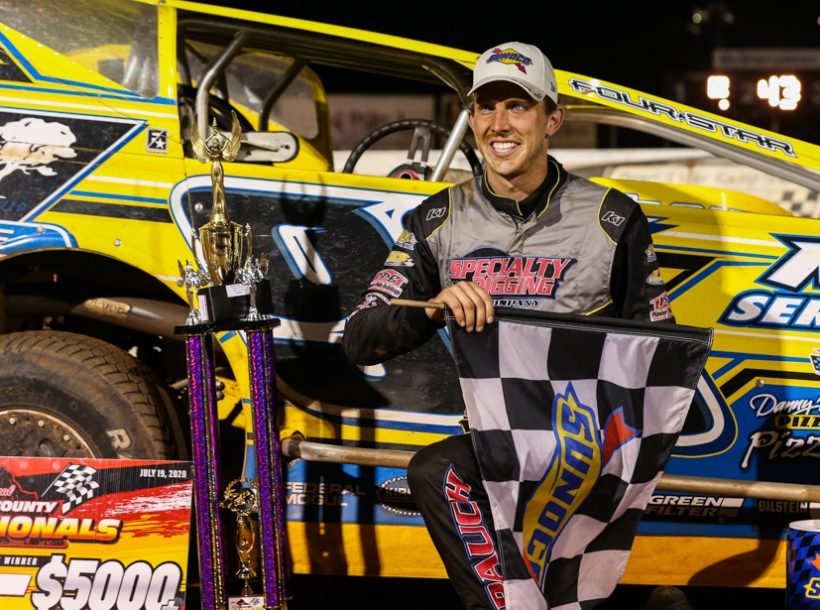 Pauch Jr. and the Rick Holsten team maintained their point lead in the STSS South Region battle with the hard-fought conquest.

The 50-lap main began with David Van Horn and Richie Pratt Jr. on the front row following the Beyea Custom Headers redraw. Van Horn’s night took an unfortunate turn just two laps in, as he brought out a yellow for a right-rear flat tire.

A major shake-up came on lap seven when Stewart Friesen spun between turns three and four racing for fifth and had to restart at the rear of the field.

When racing resumed from the Friesen spin, Laubach drove around Pratt Jr. for the lead. The man on the move would fully plant himself in the thick of things, as Pauch Jr. had climbed into second from his 10th starting position.

The war was on from there. Pauch Jr. stalked Laubach for several laps, waiting for a mistake. While the lead pair duked it out, “Super Matt” Sheppard had climbed to third and caught the top two.

At the Precision Hydraulic & Oil Halfway Point, Laubach, Pauch Jr. and Sheppard were nose-to-tail working in lap traffic while fighting for the lead. Multiple three-wide battles and slide jobs highlighted an incredible battle between three of Modified racing’s best.

Pauch Jr. ultimately made the move on lap 33, slipping underneath the “Quaker Shaker” with Sheppard following him through for second.

Meanwhile, Friesen was on the charge. He had driven into the top five, and got by Laubach on lap 36 and began reeling in the leaders.

Yellows on lap 40 and 44 gave Friesen and Sheppard perfect opportunities to get by the “Kid’s Kid,” but Billy Jr. was one step ahead of the other two, racing to his fourth career STSS win.

Milford, N.J.’s Pauch Jr. credited team owner Holsten for his success on the STSS this season.

“Rick Holsten’s given me a great ride, and we’re fast everywhere,” Pauch Jr. said. “I don’t know what else to say, Rick Holsten’s the man.”

Friesen, of Sprakers, N.Y., ended his surge from last in the runner-up position, dicing with Sheppard in the final laps. Savannah, N.Y.’s Sheppard brought the Hurlock Auto & Speed No. 9s home third.

Boyertown, Pa.’s Mike Gular was the Pioneer Pole Buildings Inc. Hard Charger for the night, coming from 22nd starting position to finish sixth in the Terry Fasnacht-owned No. 2A. Andy Bachetti out of Sheffield, Mass., finished in seventh. Laubach and Pratt both ultimately faded to eighth and ninth, respectively. Sprakers, N.Y.’s Jessica Friesen, making a rare STSS start outside of New York, rounded out the top-10.

Did Not Start: Corey Cormier