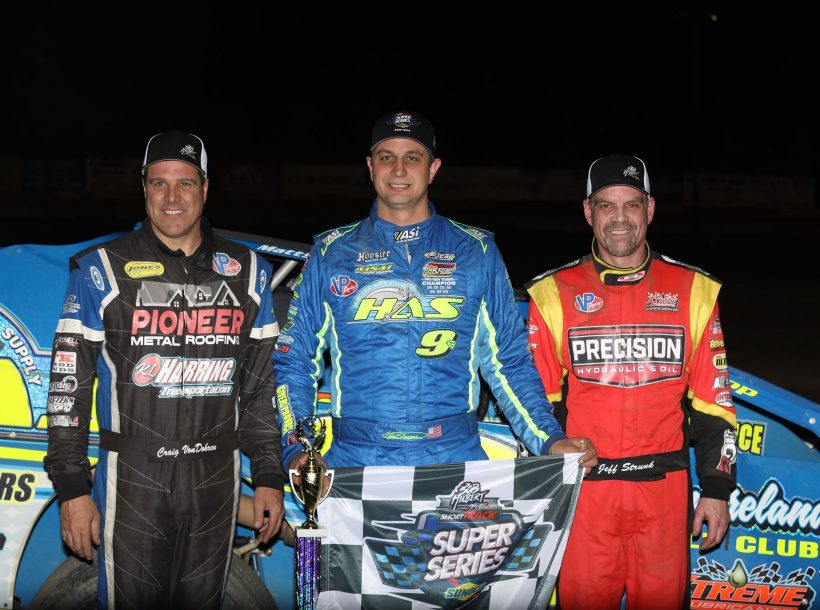 STSS Modifieds of the Velocita-USA South Region presented by Design for Vision and Sunglass Central will race 50 laps for $5,000 to win, $1,000 to win and $400 to start plus special awards and bonuses. STSS Crate 602 Sportsman (25 laps, $1,500 to win), Delaware Super Trucks and Delmarva Chargers complete the program.

The ‘Diamond State 50’ moniker brings with it a storied history at Delaware International Speedway.

David Van Horn Jr. broke through in the return of the ‘Diamond State 50’ in ’15 and first-ever Short Track Super Series race at the speedway. Stewart Friesen invaded and won the ’16 event. A year later, Friesen was again in contention for the win, but Ryan Watt swept past on the outside to steal the checkered.

Matt Sheppard emerged from a side-by-side battle with Watt to earn the ’18 triumph and repeated that conquest a year ago, this time after racing wheel-to-wheel with Keystone State veteran Craig Von Dohren.

Whose name will be added to this prestigious list on Aug. 11?

Complete ‘Diamond State 50’ race information can be found at the following link: http://shorttracksuperseries.com/wp-content/uploads/2020/07/DiamondState50GeneralInfoSheet.pdf

There is an added incentive for a Modified driver to sweep both STSS events in the state of Delaware in August: the ‘Diamond State 50’ on Aug. 11 and the ‘Blast at the Beach’ at Del.’s Georgetown Speedway Aug. 25.

Should one driver sweep the ‘Diamond State 50’ and ‘Blast at the Beach’ feature events with back-to-back victories, that competitor will receive a cash bonus of $2,000 thanks to Stockley Tavern of Georgetown.

If a single driver is not able to win both events, the driver with the best average finish between the two races will take home $1,000. The tiebreaker will be the finishing order of the ‘Blast at the Beach’ event at Georgetown.

Keep posted to the Short Track Super Series website – www.shorttracksuperseries.com – for complete information as the series takes over the First State in August.