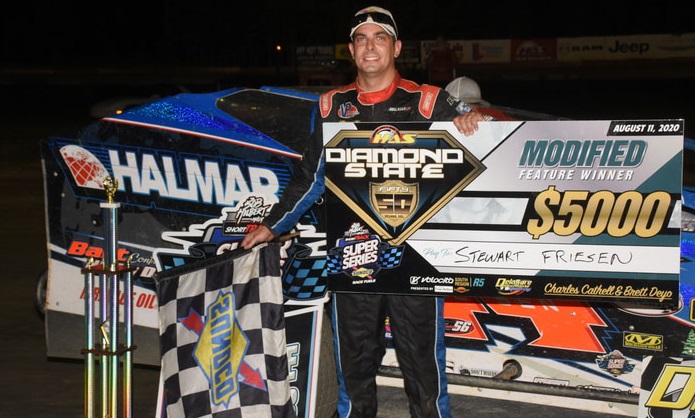 DELMAR, DE – It was a crowd-pleasing, back-and-forth battle between the sport’s titans.

Friesen took home $5,000 from the posted purse, $200 as the Precision Hydraulic & Oil Halfway leader and a pair of Oakley sunglasses from Design for Vision and Sunglass Central.

“I’ll be spending a lot of time here in Delaware this month,” Friesen, 37, said after climbing to the roof of his Halmar International No. 44 big-block. “We run the (NASCAR) Truck at Dover (Del., Aug. 21) and in two weeks we are back at Georgetown (Del., for the Aug. 25 STSS event).”

The rescheduled ‘Diamond State 50’ from August drew an event record 38 STSS Modifieds to the Cathell family’s facility for the fifth Velocita-USA South Region event of 2020 for the Modifieds and fourth ’20 Crate 602 Sportsman South point race.

Friesen and rival Sheppard started the 50-lap grind from the fourth row, with Friesen seventh and Sheppard eighth.

Ryan Watt fired off the pole following the Beyea Custom Headers redraw and led the opening seven laps before Billy Pauch Jr., off the strength of two consecutive STSS South Region triumphs, powered to the top spot on lap eight.

Working the extreme inside lane, Sheppard made it to the front before Friesen, taking the lead on the 13th tour of the half-mile track.

On lap 14, Friesen arrived in second and began stalking Sheppard trying different lanes on the tacky Delaware clay. Friesen found the very topside of the speedway to his liking, and after an extended wheel-to-wheel battle, forged ahead on the 23rd circuit.

The race was far from over, however.

Negotiating lapped traffic after lap 30 allowed Sheppard to reel Friesen back in; and at one point put the nose of the Hurlock Auto & Speed Supply No. 9s back into the top spot.

Friesen’s high-side momentum carried him back to a lead he would never relinquish despite a final restart with nine laps remaining.

The win for the Sprakers, N.Y., driver was his second in the ‘Diamond State 50’ having previously won the event in 2016 and series-leading 24th career victory.

Friesen now becomes eligible for the Stockley Tavern ‘Delaware Double-Down’ $2,000 cash bonus if he can come back and win the Georgetown STSS event on Aug. 25.

Sheppard, of Savannah, N.Y., saw his streak of back-to-back ‘Diamond State 50’ triumphs end with a runner-up finish worth $3,050. Jimmy Horton of Neshanic Station, N.J., rode the topside of the track from 15th to complete the podium with the Halmar International No. 43.

Andy Bachetti of Sheffield, Mass., advanced from 20th to fourth, earning the Danny’s Pizza Pizzazz $200 Hard Charger Award. Danny Bouc of Pipersville, Pa., climbed from 12th to finish fifth in the Craig and Leslie Pondish-owned No. 6.

Placing sixth through 10th, respectively, were David Van Horn of Ringoes, N.J., in the Fred Vahlsing No. 323ov; reigning track champion Jordan Watson of Milford, Del., after a roller-coaster outing back and forth through the field; pole starter Watt of Boyertown, Pa.; Jeff Strunk, also of Boyertown, Pa., in the Glenn Hyneman No. 126; and Tyler Dippel of Wallkill, N.Y., after pitting with a right-front suspension issue.

Pauch Jr., who had run inside the top-three with Rick Holsten’s No. 96, saw his run end on lap 40 with a power steering line issue causing a plume of smoke.

Van Doren led from start-to-finish to take the Sunoco checkered flag, but it was far from an easy triumph. First State standout Scott Hitchens moved into second on the opening lap and pressured Van Doren persistently.

Van Doren adjusted his line over the final 10 circuits, moving higher on the track and held Hitchens at bay for a crowd-pleasing victory.

A robust field of 31 Crate 602 Sportsman took part in the program.