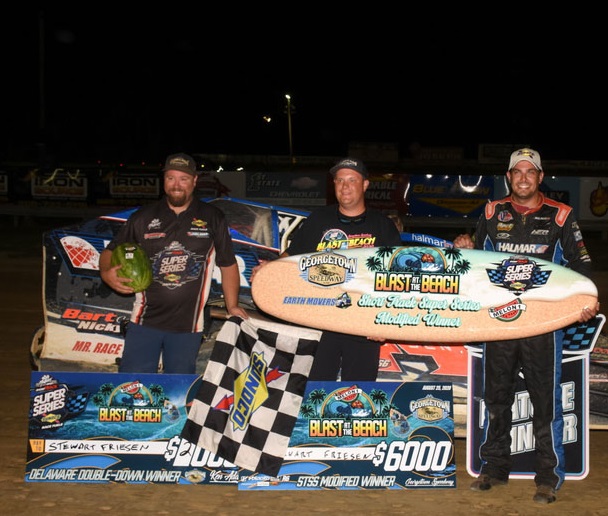 The Georgetown Speedway faithful were treated to a fantastic night of racing Tuesday. Despite rain threatening all throughout the evening, the seventh running of the Melon 1 ‘Blast at the Beach’ presented by Earth Movers LLC saw Sprakers, N.Y.’s, Stewart Friesen with a last-lap pass.

For Friesen, it was his eighth Bob Hilbert Sportswear Short Track Super Series (STSS) Fueled by Sunoco victory of 2020. For the win, Friesen picked up an extra $2,000 courtesy of the Stockley Tavern “Delaware Double-Down,” after winning the ‘Diamond State 50’ at Delaware International Speedway (Delmar, Del.) two weeks prior.

A large crowd was in attendance and treated to a full, four division show, as 105 cars totaled with 36 STSS Modifieds and Crate 602 Sportsman filling the pit area.

The event served as Round No. 6 of the Velocita-USA South Region presented by Sunglass Central and Design for Vision and the fifth Crate 602 Sportsman South event of the 2020 season.

The 35-lap STSS Modified main event saw Neshanic Station, N.J.’s, Matt Stangle and Bechtelsville, PA’s, Jeff Strunk lead the field to the drop of the green flag following the Beyea Custom Headers redraw. Stangle would lead the opening 13 laps of the event with Strunk following not far behind.

The two drivers making the biggest moves were Middletown, N.Y.’s, Anthony Perrego, who started eighth, had climbed his way to third and was chasing the top two. The other was Stewart Friesen, who started in 23rd position after qualifying through the consolation race. After a lap-13 yellow, Friesen had already climbed into the 10th position.

“This is the fastest place we race on for our style of cars, bar none,” Friesen said after his first start since March on the resurfaced half-mile track.

On the ensuing restart, Stangle chose the top side, and would regret it. Stangle struggled to get thru turns one and two, and fell back to fourth. Milford, N.J.’s Billy Pauch Jr., the defending winner of the ‘Blast at the Beach,’ made his presence known as he went from fourth to second, leaving Perrego to remain in third.

A lap-27 yellow set up an eight-lap dash for the record books. Pauch Jr. jumped out to the lead and pulled away by five car-lengths with four laps to go, and appeared to be on his way to his second ‘Blast at the Beach’ win.

Friesen would have none of it. In the remaining laps Friesen dropped to the middle groove and began to reel Billy Jr. in, before throwing a slide job for the lead at Pauch coming to the white flag.

“There was a little bit of ground I could use to launch up the hill and try to block him (Pauch) off as best I could. He crossed over and it was close, but we’ve got a great racecar,” Friesen said of his dramatic pass to win the race.

Pauch Jr. held on to the runner-up position in his Rick Holsten owned No. 96 with Anthony Perrego, in the Brian Smith-owned No. 44 rounding out the podium. Waterloo, N.Y.’s, Matt Sheppard rebounded from a lap-13 flat tire to grab fourth in his Hurlock Auto and Speed No. 9s and Jeff Strunk brought the Glenn Hyneman-owned No. 126, a brand-new Bicknell chassis, to atop-five finish.

The STSS Crate 602 Sportsman put on an outstanding race for their 25-lap, $1,500-to-win feature event. Dagsboro, Del.’s, Scott Hitchens came from 12th starting position to take the lead on lap 12. Hitchens would lead for good to grab his 21st career Georgetown win.

Hitchens took over the STSS South Region point lead with his $1,675 conquest: the $1,500 winner’s share plus $70 from Evergreen Fuels Inc., $80 in lap money and $25 as the driver picking the worst available position – 12 – in the Beyea Custom Headers redraw.

Robert Paczkowski won a dramatic Delmarva Charger feature. Joe Waters was leading coming to the checkered, before coming up lame, allowing ‘Pac-man’ to slip by and grab the win. Ashley Merritt and Joe Waters rounded out the top-three.

Next up for the Short Track Super Series, barring any regulation changes in New York State that would allow an event sooner, is the $53,000 ‘Speed Showcase 200’ at Port Royal (Pa.) Speedway Thursday, October 15-Saturday, October 17 with a Sunday rain date. Keep posted for further information on this blockbuster weekend!

Did Not Start: Jay Lowman