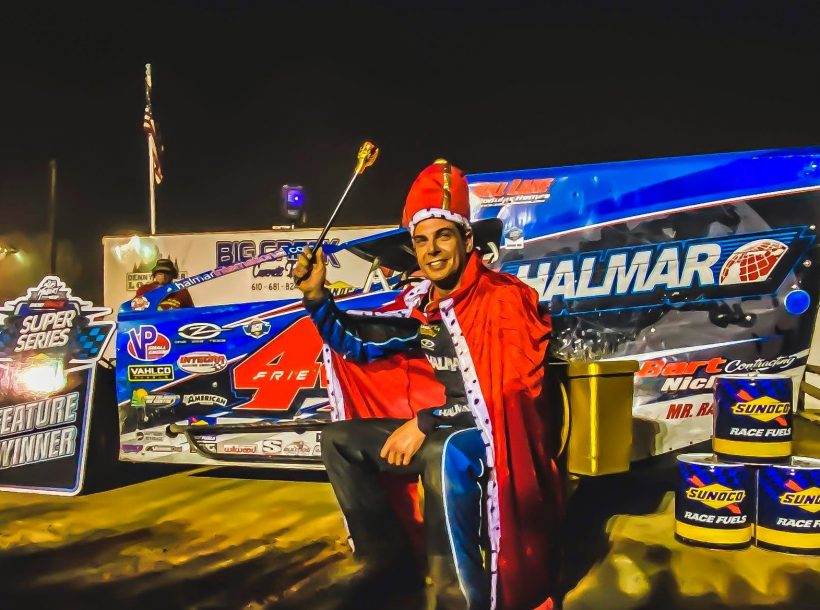 SUSQUEHANNA, PA – The race – and the season – came down to the final five laps Saturday night at Penn Can Speedway.

The Bob Hilbert Sportswear Short Track Super Series (STSS) Fueled By Sunoco ‘King of the Can’ and the Modified Halmar International North Region were decided at the Susquehanna County track before an overflow crowd. The series made its return to Penn Can for the first time in six years with 63 Modifieds in the pit area.

With a wild, late-race charge to the lead, Stewart Friesen of Sprakers, N.Y., not only won the STSS Modified 55-lap main, he also took the North Region title by a mere two-point edge over Mike Gular.

Friesen earned $5,595 including lap money for the victory and an additional $4,000 for the COVID-abbreviated three-race North Region championship.

The victory for Friesen came at the expense of Andy Bachetti, who led all but two laps of the event.

Bachetti, who launched off the pole following the Beyea Custom Headers redraw, led the opening 53 laps around the three-eighths-mile oval in search of his first career Penn Can victory.

A stalled car on the inside of turn three prompted a yellow flag on lap 49 and set up the first of two pivotal restarts for the race’s outcome.

At the drop of the green from series starter Joe Kriss, Friesen surged into third and then dove to the inside of Sheppard and Bachetti who were racing side-by-side for the top spot. A paint-swapping three-wide scramble ensued down the homestretch and Friesen’s Halmar International No. 44 emerged in second.

Bachetti, riding the outside lane, held Friesen at bay through the event’s final caution on lap 52 when Larry Wight’s car stopped at the top of turn one.

Friesen, with a last-ditch drive off the bottom, executed a slide-job on Bachetti to take the lead on the 54th lap. Bachetti drove back up to Friesen but couldn’t regain the top spot.

Friesen swept under the Sunoco Race Fuels checkered flags for his second career ‘King of the Can’ victory (his first came in 2011) and second career STSS North Region title, joining the ’15 high-points honor.

Bachetti, of Sheffield, Mass., settled for a runner-up finish with a hefty payday. Bachetti collected $3,000 from the posted payout, $1,545 in lap money, $150 from Ron Ford as the highest-finishing Afton (N.Y.) Motorsports Park representative and $200 from Precision Hydraulic & Oil as the Halfway Leader for a total of $4,895!

Returning to the seat of the family owned No. 20R after suffering a concussion earlier this season, Rochinski of Dickson City, Pa., completed a final-lap pass of Sheppard to complete the podium.

Sheppard, of Savannah, N.Y., settled for a fourth-place effort and 13th-starter Mike Gular of Boyertown, Pa., advanced to fifth in Terry Fasnacht’s No. 2A. Gular’s drive left him just a pair of markers shy of his first STSS crown.

A pit-bulging 63 STSS Modifieds signed in for action at the ‘King of the Can’ with Alan Barker, Billy Pauch Jr., Bachetti, Decker, Sheppard and Friesen winning hotly contested 10-lap heat races.

The Penn Can ‘King of the Can’ brough the ’20 STSS Modified Halmar International Modified North Region to its conclusion. Next up is the season’s most lucrative Modified race – the ‘Speed Showcase 200’ at Pa.’s Port Royal Speedway headlined by a $53,000-to-win, 200-lap main event. Visit www.shorttracksuperseries.com under ‘Event Info’ for complete ‘Speed Showcase 200’ information.