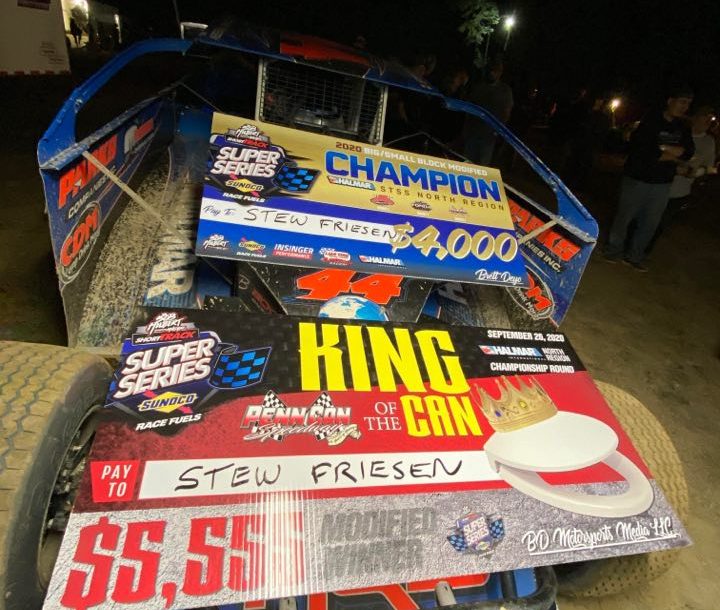 A scheduled 10-event Halmar International North Region was curtailed by COVID-19 regulations that did not allow fans to attend auto racing events in New York State.

With New York regulations tightening for speedway promoters, the STSS North Region was placed on pause for the summer.

Enter Penn Can Speedway. The Folk family, promoters of the rejuvenated facility on the Keystone State side of the Pennsylvania-New York border, came to agreement with STSS director Brett Deyo to sanction the ‘King of the Can’ as the series’ championship event.

A pro-rated (33-percent) point fund of $12,885 was pledged to the top-12 finishers in the North Region standings to reward drivers for their support of the three-race series.

After 55 laps around the Penn Can oval, the title came down to a margin of just two points.

Stewart Friesen’s pass of Andy Bachetti with a pair of laps remaining in the ‘King of the Can’ main event pushed him to his second career STSS North Region championship. The Sprakers, N.Y., driver edged Mike Gular, who entered the event as the point leader, by a pair of markers (290-288).

Friesen will receive $4,000 for the championship.

Boyertown, Pa.’s Gular, a top-10 finisher in each of the three North Region races run, was tallied in second and earns $2,300. By virtue of his runner-up finish at Penn Can, three-time champion Andy Bachetti of Sheffield, Mass., placed third with 273 points ($1,325).

The complete STSS Halmar International North Region standings can be found at the following link: https://stss.racestatcentral.com/?IDseries=1&IDseason=2020

The Penn Can ‘King of the Can’ brought the ’20 STSS Modified Halmar International Modified North Region to its conclusion. Next up is the season’s most lucrative Modified race – the ‘Speed Showcase 200’ at Pa.’s Port Royal Speedway headlined by a $53,000-to-win, 200-lap main event for the Velocita-USA South Region presented by Design for Vision and Sunglass Central October 15-17. Visit www.shorttracksuperseries.com under ‘Event Info’ for complete ‘Speed Showcase 200’ information.