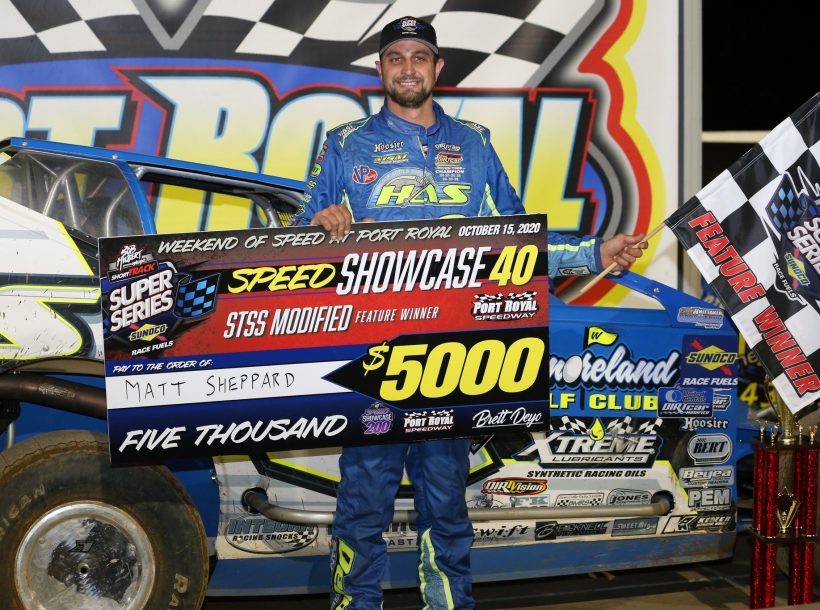 PORT ROYAL, PA – Dominant. That is the only word to describe Matt Sheppard’s performance.

Sheppard was clearly the dominant force in an event run on the tacky half-mile clay oval, earning $5,450 for his efforts: $5,000 from the posted purse, $400 as the Danny’s Pizza Pizzazz Halfway Leader and $50 as one of six Ad-Art Sign Company heat winners.

“I led a lot of the race the last time I was here (in March 2019),” offered Sheppard after climbing from his Hurlock Auto & Speed No. 9s. “We had a really good car tonight. I was being conservative and trying to keep the car straight once I got out front.”

Sheppard will start Saturday night’s ‘Speed Showcase 200’ no worse than 13th via his victory on Thursday. He can improve that position via Friday night’s Dirt Track Digest-sponsored Qualifying Races but is guaranteed to fire off from the seventh row in the 200.

‘Super Matt’ worked past pole starter Joseph ‘Jo-Jo’ Watson on the fourth lap of the 40-lap event. Max McLaughlin, making his Short Track Super Series debut, challenged Sheppard through numerous restarts before slapping the outside wall in the Sweeteners Plus No. 32c to draw the caution.

As Sheppard led, all eyes were on the Rick Holsten-owned No. 96 driven by Billy Pauch Jr. The ‘Kid’s Kid’ started 22nd and sliced through the field to arrive in the runner-up spot by the halfway mark.

With the race’s second half spun off under green-flag conditions, Pauch Jr. closed on Sheppard but took starter Joe Kriss’ checkered flag by roughly a straightaway.

The win for Sheppard was his 11th career STSS Modified victory, second of the season and first-ever at Port Royal.

Mike Mahaney of King Ferry, N.Y., authored a stout drive to complete the podium in the Adirondack Auto No. 35. Mahaney challenged Pauch heavily in the final five laps for third.

Finishing sixth through 10th, respectively, were Rocky Warner of Gloversville, N.Y., who ran inside the top-five for much of the race; Stewart Friesen of Sprakers, N.Y., rebounding from a pair of pit stops after impacting the turn-three wall on the race’s opening lap; Richie Pratt Jr. of Woodbury Heights, N.J., in the Daniel Sommeling No. 51; Danny Bouc of Pipersville, Pa.; and Ryan Godown of Ringoes, N.J., who rallied late for a top-10 finish.

Three B-Mains were run with victories going to Williamson, Friesen and Billy Decker.

In-person attendance is permitted and the event will be streamed live on Dirt Track Digest TV (www.dirttrackdigest.tv).