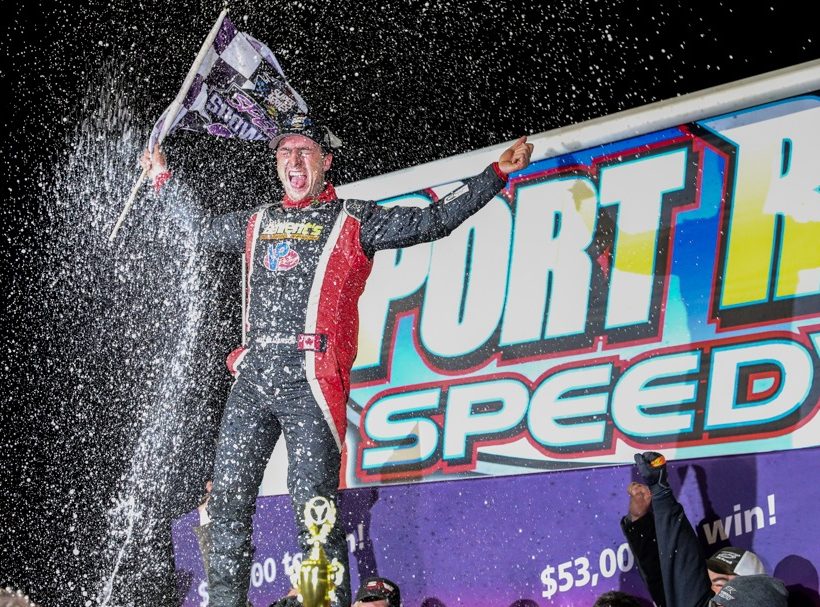 PORT ROYAL, PA – An unforgettable, inaugural ‘Speed Showcase 200’ at Port Royal Speedway was capped off with a 200-lap main event for the ages Saturday night.

The win netted ‘Money Mat’ $53,000-plus, and another high-paying event added to his resume. Along with the large paycheck, it was Williamson’s first career Bob Hilbert Sportswear Short Track Super Series (STSS) Fueled By Sunoco Modified victory.

“Thanks to Brett Deyo (STSS promoter) and Port Royal for doing this. It’s incredible to be able to race for $53,000 in the times we’re in right now,” Williamson proclaimed in Victory Lane.

Williamson is not just racing for the paychecks; he keeps on winning them.

A pair of Keystone State drivers – Alex Yankowski and Danny Bouc – led the 42-car field to the green in the first ever ‘Speed Showcase 200’ edition.

Williamson quickly showed his Bicknell Race Cars mount as one of the fastest cars on the track: climbing from his ninth starting position to take the lead for the first time with just 16 laps completed.

An otherwise clean-and-green start to the 200-lap event came to a grinding halt, literally, on lap 42, as Frenchtown, N.J.’s, Billy Pauch Jr. had a throttle stick on his Rick Holsten-owned No. 96, sending him head on into the third-turn guardrail. Fortunately, Pauch Jr. walked away after flipping violently.

Middletown, N.Y.’s Anthony Perrego found the top side of the ‘Speed Palace’ to his liking when racing resumed after an hour-and-a-half delay and used the top line to take the lead and ultimately lead the field to the lap-100 halfway break.

The lead at the race’s midpoint earned Perrego the $600 halfway bonus courtesy of Precision Hydraulic & Oil.

Following the halfway break – with some cars using the hot pit area and others remaining on the speedway to advance positions – Sprakers, N.Y.’s, Stewart Friesen established himself as the car to beat in the second half of the main event. Friesen stretched out his lead and carved through lapped traffic with ease.

A lap-180 caution flag changed the complexion of the race.

Friesen’s lead evaporated and Williamson pulled alongside Friesen for a double-file restart.

Friesen chose the inside lane. Williamson remained event down the long Port Royal frontstretch. When Friesen drove hard into turn one and slid across the track, Williamson shot the gap to the inside to take a lead he would not relinquish.

Despite a late-race, single-file restart that put Friesen back on Williamson’s bumper, Williamson was able to repel Friesen’s bold outside-lane tactics to score the STSS breakthrough triumph.

Sprakers, N.Y.’s Friesen settled for a $20,000 runner-up finish and snagged an additional $1,000 via the Mike’s Racing Heads Hard Charger Award for his 38-position ascent from 39th starting position. Friesen took a series provisional to start the 200 after losing an engine in his Friday night Dirt Track Digest-sponsored Qualifying Race.

Perrego held onto a fourth-place finish aboard Brian Smith’s Superior Remodeling No. 44 and Larry Wight of Phoenix, N.Y., charged through traffic in the final laps to complete the front five driving the Gypsum Racing No. 99L. Wight started the 200 from 14th position.

Mooresville, N.C.’s, Max McLaughlin ran inside the top-10 for much of the event, finishing sixth aboard a Sweeteners Plus No. 32c. Completing the top-10 were Ryan Godown of Ringoes, N.J., up from 15th in the Steve Searock No. 26; Andy Bachetti of Sheffield, Mass., who started 29th on the grid; pole starter and early leader Alex Yankowski of Covington Township, Pa.; and Sidney, N.Y.’s Billy Decker recovering from a turn-three melee with the Jeremy Smith Racing No. 91. Decker started 26th.

Saturday B-Main winners were Decker and Brandon Grosso. Matt DeLorenzo topped a special 3-lap Dash to earn the 38th starting position in the 200.

The Ice Less LLC-sponsored ‘Speed Showcase 50’ for the Crate 602 Sportsman did not lack drama – just like its Modified counterpart.

Middletown, N.Y.’s, Brian Krummel continued his impressive return to racing, winning the $2,500 payday. Krummel charged from his ninth starting to position to take the lead on lap 17. Despite several challenges Krummel never faltered in his Howie Finch Jr.-owned No. 4, taking home a $2,995 payday including bonuses and special awards.

Upper Makefield, Pa.’s Joe Toth did all he could, as he charged in the late stages to second; but was unable to find a way by Krummel working a lower lane on the half-mile oval. Toth had surged forward from 10th starting position.

Geneva, N.Y.’s, Kevin Root followed Toth on the late-race charge, but he – like Toth – ran out of laps. Root started the event from 11th position.

Next up for the Short Track Super Series is the Mid-Atlantic Championship Weekend at Del.’s Georgetown Speedway Friday, Oct. 30 and Saturday, Oct. 31. The event is headlined by the Velocita-USA South Region presented by Design for Vision and Sunglass Central Modified points finale, a 40-lap STSS Modified event offering up to $7,000 to win with “Gambler’s Fee” posted. STSS Crate 602 Sportsman take part in a 25-lap South Region finale offering $1,500 to win among numerous divisions.