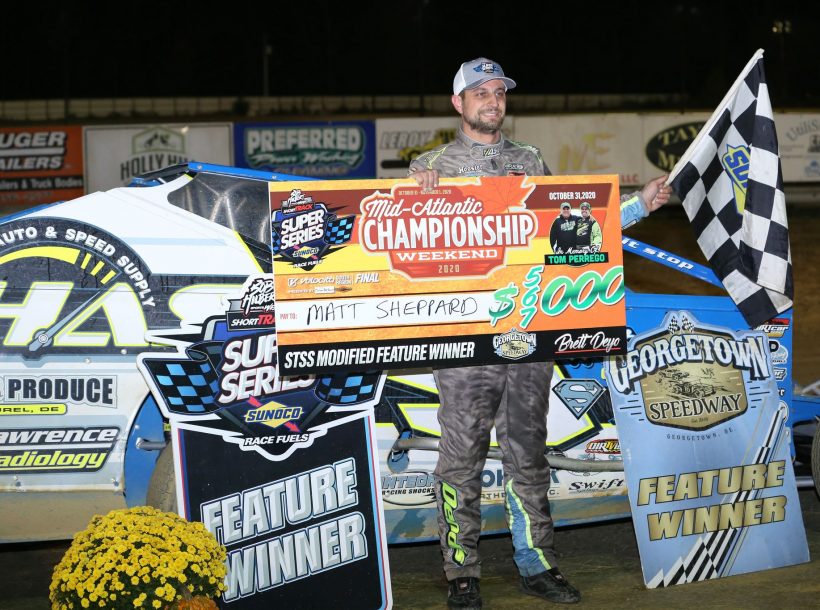 Despite drawing 10th during the Beyea Custom Headers Redraw and getting a flat tire during the 44-lap main event honoring the late Tom Perrego, Sheppard was not going to be denied his first win at the famed half-mile in southern Delaware during Mid-Atlantic Championship Weekend.

“Georgetown has always been a thorn in my side, so what a fitting way to get the first win here than to have to come from the back,” a relieved Sheppard said in Victory Lane with the Hurlock Auto & Speed No. 9s.

The race rounded out the Velocita-USA South Region presented by Design for Vision and Sunglass Central for the Bob Hilbert Sportswear Short Track Super Series (STSS) Fueled by Sunoco Modifieds.

Sprakers, N.Y.’s, Stewart Friesen clinched his second-career STSS South Region championship, his first since 2016, and picked up the $10,000 check to go with it. Friesen and the Halmar International team took the title by a mere 10-point margin.

Contrary to Sheppard, Friesen drew the pole, and led the field to green alongside Hellertown, Pa.’s, Rick Laubach. Laubach would use the outside groove to take the lead and set the pace in the early going.

Sewell, N.J.’s, Richie Pratt Jr. began to really move in the early going, climbing to third and consistently pressuring Friesen for second before a yellow on lap six. The yellow was for, among others, Matt Sheppard’s left-rear flat tire.

Pratt’s charge would falter shortly after, as he also fell victim to a left-rear flat tire. A longer green flag run would follow that yellow, and that was where Friesen flexed his muscle on Laubach.

In heavy lapped traffic, Laubach chose the wrong lane, and Friesen used the bottom lane to move ahead of the “Quaker Shaker” on lap number 20. Sheppard’s recovery from the rear of the field became noticeable on a 21st-lap restart when he lined up ninth.

A couple of restarts later Sheppard had climbed to second and the battle was on between the sport’s top competitors again. Sheppard found the top lane off turn two on lap 30 to surpass Friesen.

Sheppard never relinquished the lead in the remaining 14 laps, as he cruised to his 12th career STSS Modified victory and third of the season. Sheppard took the $100 Stockley Materials “Gambler’s Challenge” making the win worth $7,000 total plus $50 as an Ad-Art Sign Company heat winner, $44 from KB’s Racing Photos in memory of Tom Perrego for a cash total of $7,094 and a pair of sunglasses from Design for Vision and Sunglass Central.

Friesen faded to fourth late, but it was enough to hold onto the STSS South Region title while earning a $544 Halfway Leader bonus from Superior Remodeling, a $440 Hurlock Auto & Speed Tom Perrego Memorial Award and a $50 Ad-Art Sign Company heat-race victory.

Danny Creeden of Wurtsboro, N.Y., finished sixth in a rare Georgetown Speedway start, ahead of Rick Laubach rebounded from a left-rear flat for seventh with Ryan Kerr’s No. 1K. Boyertown, Pa.’s, Mike Gular held onto eighth in Terry Fasnacht’s No. 2A with another Boyertown resident – Ryan Watt – following him in ninth. Neshanic Station, N.J.’s Matt Stangle rounded out the top-10.

The Super Late Models made their one and only appearance for 2020 at Georgetown Speedway and Rick Eckert made the tow south from York, Pa., worthwhile as he grabbed the win in the 40-lap feature event.

Eckert’s victory was a breakthrough at Georgetown, where ‘Scrub’ had two near-misses in the track’s Super Late Model events in recent seasons.

Eckert and Max Blair put on a phenomenal show at the mid-race point, changing lanes – and the lead – back-and-forth. Blair took the lead away on a lap-16 restart, using the outside to his advantage.

Following a lap-26 yellow, Eckert regained the lead back for good, driving around Blair through one and two to take the $7,000 payday after taking the $100 JD Shuckers Georgetown “Gambler’s Challenge” prior to the start of heat races.

Kyle Hardy had a back-and-forth night, but he it ended on an upswing, as he drove back from ninth to third, after taking the initial green in third. Michael Maresca challenged the top-two for a short period before the lap-16 restart, and the Potsdam, N.Y., native came home fourth. Georgetown’s own Ross Robinson worked the inside lane to a top-five finish.

The Bob Hilbert Sportswear STSS Crate 602 Sportsman South Region concluded in dramatic fashion in the race for the championship. Belle Mead, N.J.’s, Justin Grosso allowed for little drama up front, as the youngster led all 25 laps for his second Georgetown win of the year, worth $1,500.

The race for the championship was not as simple. Dagsboro, Del.’s Scott Hitchens drove from the rear of the field twice to finish in seventh position. Hitchens’ rally was good enough to win the STSS championship by one point over Niskayuna, N.Y.’s, Tim Hartman Jr., who finished in fourth position.

Andy Cassel won the Sportsman race for the Southern Delaware Vintage Cars with Robert Blann and David Tucker II following him to podium finishes in the 12-lap event.

Matthew Smith, who joined the Delaware Super Trucks halfway through the season, got another Georgetown win in impressive fashion. Matt Esham held onto second over Matthew’s brother, Robert Smith who finished third in the 12-lap event.

Joe Waters won a wire-to-wire 12-lap Delmarva Charger feature, continuing the dominance he and Chris “Tippy” Martinez, have had over the Chargers in 2020. Geoff Carey charged for second and Ashley Merritt rounded out the top-three.

Saturday was ultimately the only day of the Mid-Atlantic Championship Weekend to be run due to weather issues. Persistent rain and flooding forced Friday’s program to be postponed to Sunday. A late weather shift brought rain into the area Sunday and the event was canceled.

Next up for the Short Track Super Series is the inaugural ‘Cajun Swing’ through Louisiana November 11-14 with two nights of racing at Ark-La-Tex Speedway in Vivian, La., (Wednesday, Nov. 11 and Thursday, Nov. 12) and Qualifying Night for the ‘Mods in the Marsh 75’ paying $20,000 to win on Friday, Nov. 13 at Chatham (La.) Speedway followed by the main event on Saturday, Nov. 14.