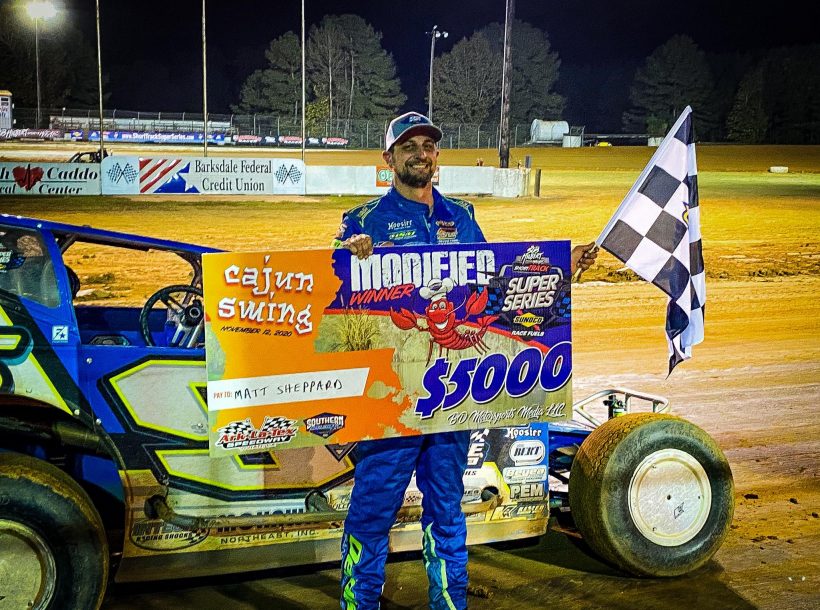 VIVIAN, LA – Matt Sheppard sports a New York address, but he feels right at home in Louisiana after capping a two-race sweep of Ark-La-Tex Speedway, capturing the non-stop 50-lap feature event worth $5,000 on Thursday night.

“I might have to move down here,” Sheppard joked in Victory Lane. “This state has been really good to me, I really enjoy the tracks; they’re so fun and so racy.”

The victory was Sheppard’s 14th in his career and third straight in Bob Hilbert Sportswear Short Track Super Series (STSS) Fueled By Sunoco races. The Savannah, N.Y. driver has banked $9,000 in two nights during the historic ‘Cajun Swing’ with still $20,000 up for grabs on Saturday night (Nov. 14) at Chatham Speedway.

Teammates Jeff Strunk and Mike Gular led the field to the opening green after drawing the front-row starting positions. Gular led the first lap before Strunk snatched it away on the bottom as they completed lap two. Through the first five laps, the top four of Strunk, Gular, Sheppard and Stewart Friesen separated from the field as Jack Lehner darted into fifth from his eighth-place starting spot.

The leaders hit lapped traffic on just the seventh circuit, the same lap Sheppard inched under Gular for the runner-up spot. Behind them, Lehner snuck beneath Friesen for fourth.

On lap 13, Sheppard made his move.

“I was trying to be patient and just follow Jeff,” Sheppard said. “I figured I’d give the top a shot and got a really good run in turn one and two.”

On Wednesday, Sheppard ran the cushion for the entirety of the main event, and then used it to launch around Strunk for the race lead in Thursday’s night feature. Once he took control, “Super Matt” dropped back to the bottom and drove away, lapping all the way up to fifth.

There was still plenty of battling going on throughout the field, though, as Friesen came alive during the second half of the 50-lap feature. On lap 32, Friesen moved back to the top to race around Gular for fourth and then took the final podium spot from Lehner with just 13 tallies remaining.

Despite battling through a mess of lapped cars, Friesen closed in on Strunk and snagged the runner-up spot on the final circuit.

“That was a lot of fun,” Friesen noted afterward. “There was a lot of traffic, but it was a lot fun.  I wish we could have gotten a win win, but we’ll take a second and get rolling to Chatham.

“It really is a pleasure to be racing down here.”

Strunk, after leading the initial 13 laps, settled for third aboard the Terry Fasnacht-owned No. 2x.

“It’s not fun to lead a race and lose, but it’s a consistent finish and we’ll work on it to get better for the next two nights (at Chatham),” Strunk said on the front stretch.

Lehner and Gular, the final two cars on the lead lap, recorded their second top-five result in as many races with fourth- and fifth-place finishes, respectively.

The “Cajun Swing” continues on Friday and Saturday night, culminating in a $20,000-to-win ‘Mods in the Marsh 75’ feature event at Chatham. STSS Modifieds will run Qualifying Events on Friday in addition to all of the track’s weekly divisions.