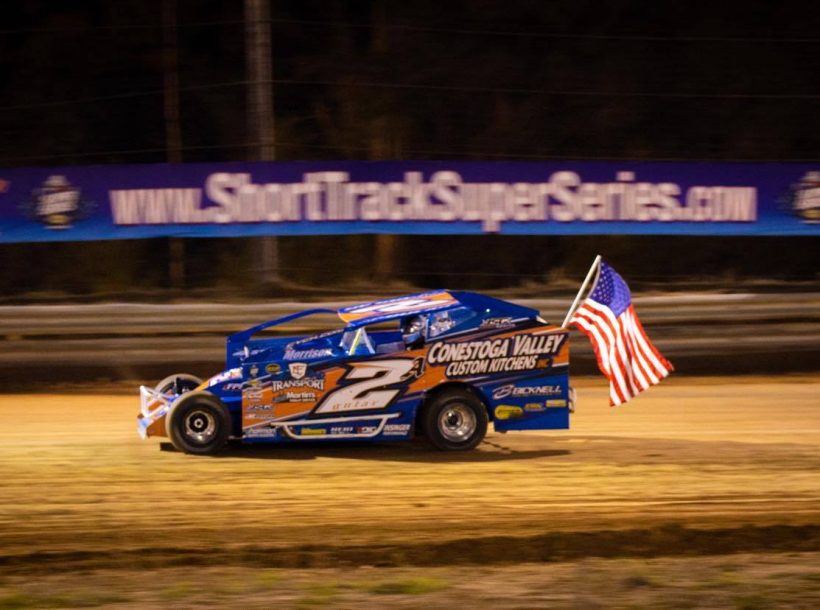 Eric Williams, who broke a driveshaft at Ark-La-Tex Speedway on Thursday night and had issues with his trailer earlier this week, came from last in his heat to finish third and then drew the pole for the ‘Mods in the Marsh 75’ on Saturday.

“Finally, my luck is starting to turn around,” Williams said after the redraw. “This week has been rough, but maybe we can turn this around tomorrow night.”

Matt Sheppard will join Williams on the front row on Saturday as the Savannah, N.Y. driver looks to add $20,000 to the $9,000 that he’s already won during the historic “Cajun Swing” thanks to a two-race sweep at Ark-La-Tex Speedway in Vivian, La., on Wednesday and Thursday.

Strunk and Mike Gular, teammates under the Terry Fasnacht umbrella, will share the second row on Saturday night. Gular drove from sixth to second in his heat race.

“We’ve been decent, just not fast enough to win this week,” Strunk said. “We’ll hopefully get it going better tomorrow.”

Gular shared the same sentiment during the redraw.

“I got lucky on the start, but we were not too good tonight,” said Gular. “We’re hoping to find something in this practice (later tonight) for tomorrow.”

A pair of consistent racers, John Willman and Derrick McGrew Jr., start fifth and sixth, respectively, on Saturday. Both drivers advanced to the redraw from the second heat as Willman secured second with McGrew in third.

“This little motor is doing pretty good on these small tracks,” Willman explained. “We just have to get the car a little better.”

A practice session was held for the STSS Modifieds later in the program and Siri was the fastest of all drivers with a lap of 14.044 seconds.

All weekly Chatham Speedway divisions also participated in Friday’s program leading up to the $20,000-to-win event on Saturday.

The ‘Cajun Swing’ finale takes place Saturday (Nov. 14) with the STSS 75-lap ‘Mods in the Marsh’ $20,000 event plus all weekly Chatham Speedway divisions. Hot laps hit the track at 6 p.m., with racing at 7 p.m. All events will be broadcast live on Dirt Track Digest TV (www.dirttrackdigest.tv).