Down To The Wire: Sheppard Edges Friesen At Chatham For $20,000 Payday 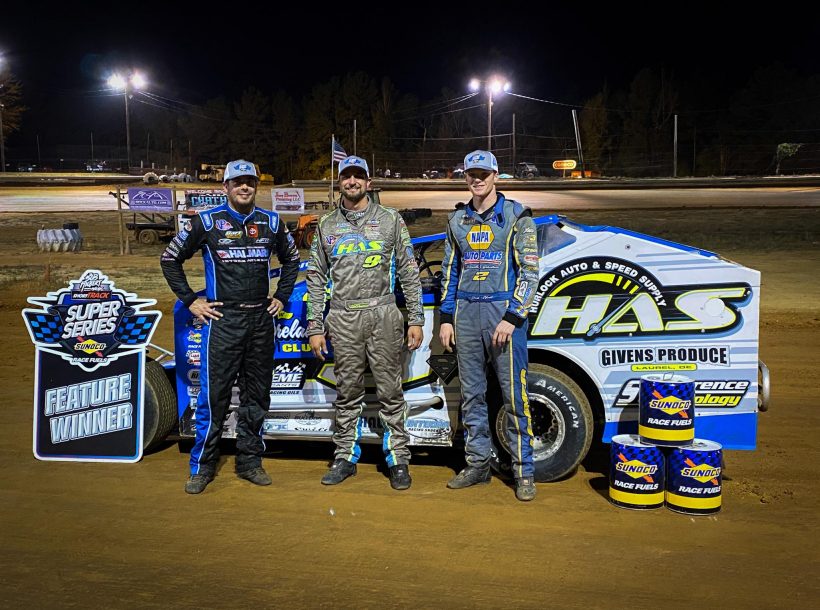 CHATHAM, LA – Matt Sheppard slid up in front of Stewart Friesen on the final turn to clinch a three-race sweep and a $20,000 payday on the final night of the Bob Hilbert Sportswear Short Track Super Series (STSS) Fueled By Sunoco’s historic ‘Cajun Swing’ at Chatham Speedway on Saturday.

After losing the lead to Friesen, Sheppard, who totaled $29,000 in total purse money this week, regained control of the race, but on the final lap, Friesen rode the outside lane to reach Sheppard’s right-rear tire coming to the checkered flag.

“This feels really good,” Sheppard said. “Stewy scared the crap out of me on the final lap, but when you’re racing against him, you have to be up on the wheel at all times.”

On Friday night, Friesen won his heat race but redrew ninth of nine. On Saturday, though, he quickly advanced to the front before eventually taking the lead.

“I’m really proud of our guys that we held pace with Matt (Sheppard) tonight,” said Friesen. “It’s been a really fun couple days down here and I’m happy to have met a lot of awesome people.”

From his outside pole starting spot, Sheppard led the opening lap ahead of Jeff Strunk, Mike Gular, Tyler Siri and Friesen. Teammates Strunk and Gular battled side-by-side by for numerous laps before Gular eventually took control of the position.

On lap 14, Friesen side-stepped Strunk for third and set his sights on Gular. On lap 27, the Halmar International-sponsored No. 44 took the runner-up position.

Meanwhile, Jack Lehner, who suffered a first-lap incident, rebounded from the back of the pack to join the top five by the midway point of the race.

In heavy lapped traffic, Gular retook second from Friesen just before a caution flag flew on lap 35 for Caleb Dillard, the first yellow since cautions on the first lap. With 40 to go, Sheppard led Gular, Friesen, Strunk, Lehner, Jeff Heotzler and Siri, but Gular was forced to the pits, surrendering his runner-up spot.

When the green flew once more, Friesen used the outside lane to scoot around Sheppard on lap 36. After a few consecutive cautions, Friesen continued to lead the field on lap 39.

Battling heavy slower traffic, Sheppard snatched the lead from Friesen once more on lap 46 with Lehner advancing to third. With the battle for the lead heating up, Siri, Strunk and Gular waged war for the back end of the top five.

Sheppard maneuvered the slower cars pretty efficiently, but despite that, Friesen stayed right on his tail. When “Super Matt” took the white flag, Friesen made his move.

When the leaders stormed down the backstretch for the final time, Sheppard elected for the middle while Friesen put it all on the table on the extreme outside. Coming off of turn four, the two made contact as Sheppard slid up and Friesen’s left front made contact with Sheppard’s right rear.

“This really has been quite a week,” Sheppard mentioned in Victory Lane. “My first win of the year was at Chatham and to end the year with four straight wins … I can’t think of a higher note.”

Lehner locked down the final spot on the podium, finishing in third.

“I had a good enough car to make a comeback,” Lehner said on the homestretch. “I could’ve taken a yellow at the end to bunch everyone back up, but I’m happy with how consistent we’ve been and I’d love to come back down here and race some more.”

Strunk finished fourth, his third top-five in three races in Louisiana, edging out Siri in fifth. Rounding out the top ten were: Gular, Shane Hebert, Dillard, Greg Dillard and Jimmy McCommas, who advanced from the 22nd-starting spot.

A complete program of Chatham weekly divisions filled out the Saturday program.