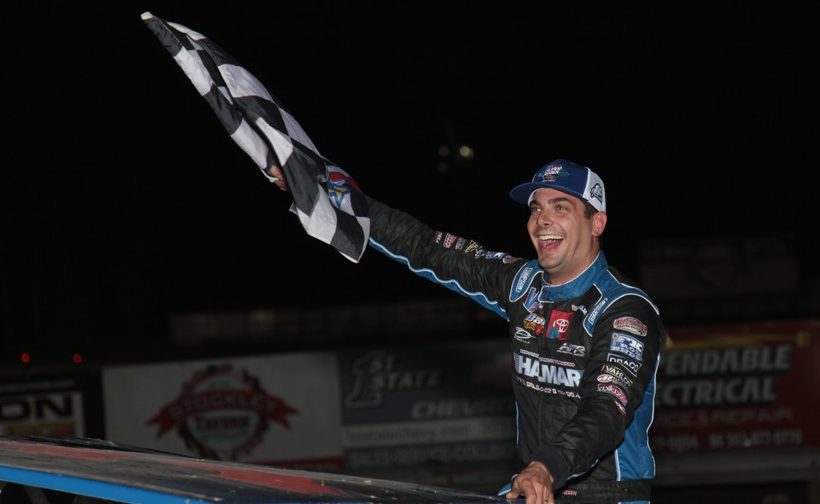 Friesen earned $4,000 from the posted payout in the 35-lap L&J Sheet Metal Modified event and an additional $2,000 ‘Grandma’s Gravy’ bonus for having perfect attendance in the 2020 Bob Hilbert Sportswear Short Track Super Series (STSS) Fueled By Sunoco. He went home to Sprakers, N.Y., with $6,050 including an Ad-Art Sign Company heat-race victory.

“It’s awesome to close out the season with a win,” Friesen said in Victory Lane. “We’ve been close the last couple of months, a lot of seconds, I appreciate the team’s hard work.”

The hard work paid off in a big way, as Friesen drove his big-block powered Halmar International No. 44 to a 13-second margin of victory over the rest of the field. It was Friesen’s third Georgetown Speedway victory in four appearances this season, having previously won the Melvin L. Joseph Memorial in March and the ‘Blast at the Beach’ in August.

Potsdam, N.Y.’s Mike Maresca and Pipersville, Pa.’s Danny Bouc made up the front row for the 2020 Northeast dirt-track finale. It didn’t take Friesen long to make his presence known.

The ‘20 STSS and American Racer Cup champion climbed to second on the opening lap – and following a restart – got around Maresca using the outside lane of the progressively banked oval to pull ahead for good on lap two.

Frenchtown, N.J.’s Billy Pauch Jr. charged early, climbing from 10th to second in just six laps aboard the Rick Holsten-owned No. 96. However, lap seven would be Pauch Jr.’s undoing as he slipped over the berm in turn two and fell to mid-pack.

With Pauch Jr. mired in traffic, Middletown, N.Y.’s Anthony Perrego became the driver to watch in Gary Simpson’s No. 12k. Perrego methodically climbed to second over the course of the long green-flag run to end the race.

By the time Perrego got to the runner-up position, Friesen had nearly a half-track advantage.

Perrego finished second, worth $3,150 including the Downstate Dirt & Deals $100 Hard Charger Award and a $50 Ad-Art Sign Company heat victory. Hellertown, Pa.’s Rick Laubach drove the Gary Herrmann No. 7 to a $2,000 podium finish, followed by Maresca and Laurel, Del.’s Kevin Sockriter in a strong ride aboard the Keith Coulbourne-owned No. 55.

Danny Creeden, another New York invader, came home sixth for the second consecutive event at Georgetown. Pauch Jr. rebounded to finish seventh. Dominic Buffalino of Sayreville, N.J., finished eighth in his debut aboard the Glenn Hyneman No. 126 while fighting brake issues in the feature, while fellow Garden State resident Richie Pratt Jr., brought home his family-owned No. 28 ninth and Bouc rounded out the top-10 after pitting for a flat right-rear tire in the Craig and Leslie Pondish No. 6.

An emotional White dedicated the win to his wife who is undergoing cancer treatments.

White held off several challenges from an outside-running James Hill to pick up the victory.

RUSH Late Models ended their ‘20 racing season with Kyle Hardy towing from Linden, Va., to grab the $1,500 payday in the 25-lap event. Like Friesen, Hardy used the topside of the track to perfection and won in dominant fashion.

Trevor Collins of Seaford, Del., finished second and earned the Sunoco-sponsored Georgetown Speedway championship, worth $750. Collins entered the night leading by just one point over Matt Hill and four points over Amanda Whaley-Robinson, both of whom encountered trouble in the feature.

Georgetown native Billy Thompson was the First State Mobile Dustless Blasting Hard Charger as he came from 13th to third. Dana Walker of Sharptown, Md., finished in fourth and Georgetown’s Joe Pete rounded out the top-five.

Todd Sammons won an exciting Little Lincoln 12-lap feature, his first win of the season at the speedway. Jordan Herbert came home a close second and Bunky White rounded out the top-three. The Little Lincolns raced for an increased $200 to win in their season finale.

Robert Smith outdueled his brother to grab his second win of the Georgetown season in the 12-lap Delaware Super Truck main. Smith came from 11th to pass brother Matt Smith, who finished second, for the win. Kyle Brasure came home a distant third to round out the podium.

Robert Paczkowski won an incredibly eventful 12-lap Delmarva Charger feature, to grab his elusive first win of the year. The Chargers had their highest car count of the season with 14 cars signed in. Jay Lowman and Chris Carroll rounded out the top-three.

Georgetown Speedway held the distinction of opening the ’20 Northeastern dirt Modified season – pre-COVID – on the first weekend of March and wrapped up the year with the Nov. 21 finale.

Next up for the speedway is an Open Practice session on March 6, 2021. The Melvin L. Joseph Memorial weekend is set for Friday-Saturday March 12-13, 2021.

Did Not Start: Jim Britt