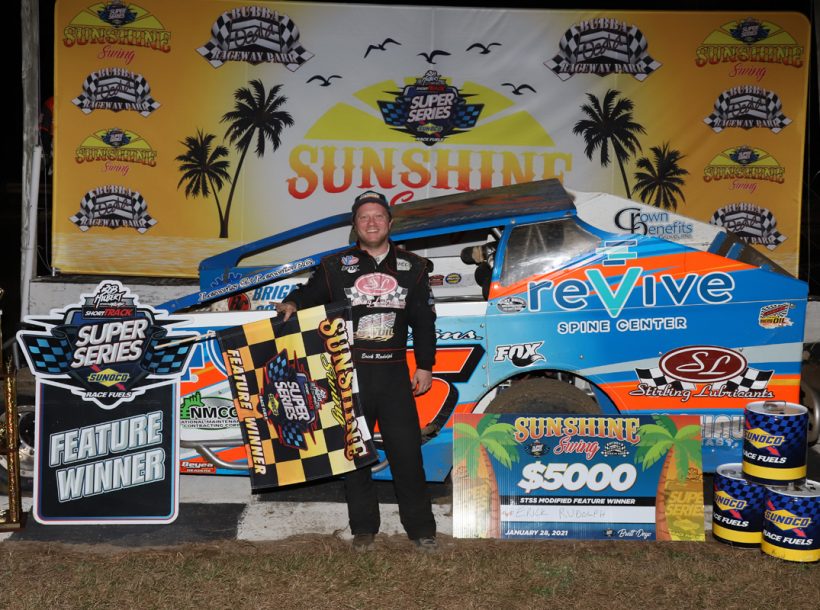 The first race of the ‘Sunshine Swing’ presented by Taylor & Messick saw a back-and-forth, tooth-and-nail battle for the lead.

When the checkered flag flew on the 35-lap main event slowed only once by a first-lap tangle, Ransomville, N.Y.’s Erick Rudolph was the man in Victory Lane. The win was “Run Run Rudolph’s” third career STSS victory, and his first since the final night of the first edition of the Sunshine Swing at All-Tech Raceway.

The win netted Rudolph a $5,000-plus payday to kick off the week in the Sunshine State.

Rudolph led the field to green, alongside York, N.Y.’s Kyle Coffey, but it was Savannah, N.Y.’s Matt Sheppard, and Sprakers, N.Y.’s Stewart Friesen quickly charging to second and third, and stalking Rudolph up front.

Friesen snuck by Sheppard, setting the stage for an all-out war between Rudolph and Friesen. While the two traded the lead back-and-forth, slicing through lapped traffic, Potsdam, N.Y. native Mike Maresca had marched from 18th to fifth. Maresca climbed as high as fourth, but couldn’t catch the trio up front.

Rudolph led laps 1-3, with Friesen in front on laps 4-5. Rudolph regained the lead on laps 6-17, with Friesen back in front at the Danny’s Pizza Pizzazz Halfway Bonus circuit of 18. Friesen maintained the top spot through lap 25 when Rudolph took over for the final time.

As the race marched toward the finish, Rudolph began to put slower traffic between himself and Friesen, while Sheppard was coming back to life, reeling in Friesen for second.

When the checkered flew, Sheppard had gotten back to second, and was reeling in Rudolph, but ran out of time. Friesen held onto third in his Chris Larsen-owned No. 44, while Max McLaughlin of Mooresville, N.C., drove his Sweeteners Plus car to fourth, and Maresca rounded out the top-five in his Gary Simpson-owned No. 12k.

Wallkill, N.Y.’s Tyler Dippel charged late for sixth driving the Bill Pascual No. 3. Frenchtown, N.J.’s Billy Pauch Jr. finished in seventh behind the wheel of Rick Holsten’s No. 96. Anthony Perrego of Middletown, N.Y. came home with a quiet eighth-place finish in the Brian Smith-owned No. 44. Jimmy Horton of Neshanic Station, N.J., fought hard for a ninth-place finish and Pipersville, Pa.’s Danny Bouc rounded out the top-10.

Sicklerville, N.J.’s Steve Kemery grabbed his first career STSS 602 Sportsman victory to open the ‘Sunshine Swing.’ Despite a setback on a mid-race restart, Kemery rebounded to grab the $1,700 payday in the 25-lap event.

Pit bands can be purchased starting at 2 p.m. The pits will be cleared by 4 p.m. Grandstand gates open at 5 p.m. The drivers’ meeting will take place at 5 p.m. Track run-in begins at 5:30 p.m. Hot laps are scheduled for 6 p.m. and racing gets underway at 7 p.m.

Grandstand admission is $25. Kids 12 and under are FREE. Florida residents must present ID for free admission.