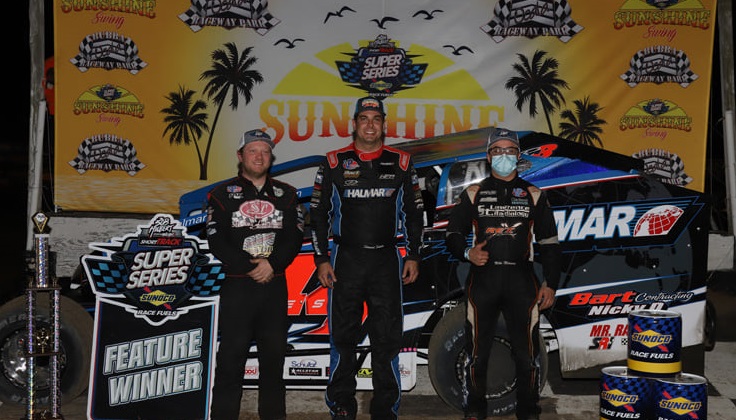 This win, worth $6,000-plus, was his first at Bubba Raceway Park and his third in the Sunshine State with the STSS.

Friesen and Ransomville, N.Y.’s Erick Rudolph, once again battled for the checkered on night No. 2 of the Taylor & Messick Co. ‘Sunshine Swing.’ This time, the rolls reversed, as it was Friesen besting Rudolph for the win.

Lambertville, N.J.’s Cale Ross and Pittsfield, Mass. Brett Haas led the field to green for the 40-lap main event. However, it was Frenchtown, N.J.’s Billy Pauch Jr. that grabbed the lead off the first two turns of the race.

It didn’t take long for Rudolph to march from his seventh starting spot to second, and then made a move underneath Billy Jr. on lap seven. Friesen wasn’t far by behind, as he worked to second a couple laps later.

The race then began to hit a stage of yellow fever, as Friesen and Rudolph continued to change the lead several times in the short runs. While the two slugged it out up front, East Greenbush, N.Y. driver David Schilling was hanging tough in the third spot, waiting for an opportunity to pounce.

Billy Decker, of Unadilla, N.Y., was the driver on the move, as he had come from 18th to fighting with Schilling for the third spot.

Friesen took the lead for good on lap 28, beating Rudolph to the line right before a yellow came out, giving Friesen the advantage on the ensuing restarts for the remainder of the race.

After 40 laps around the three-eighths-mile track, it was Friesen taking the win, with Potsdam, N.Y.’s Mike Maresca sneaking into the second spot in the late stages of the race. Erick Rudolph held on for third, with Mooresville, N.C.’s Max McLaughlin grabbing his second fourth-place finish of the week, and Billy Decker rounded out the top-five in his Jeremy Smith Racing entry.

Savannah, N.Y.’s Matt Sheppard was the Manmiller Electric Hard Charger coming from 27th to sixth. David Schilling faded late, but held onto a seventh-place finish. Mike Gular, of Boyertown, Pa., brought home the Terry Fasnacht-owned No. 2A in eighth, surviving the war of attrition. Anthony Perrego, of Middletown, N.Y., finished ninth in the Brian Smith owned No. 44, while Neshanic Station, N.J., driver Matt Stangle rounded out the top-10 in his family-owned No. 6.

Schnecksville, Pa.’s Tanner Van Doren won his second career STSS Crate 602 Sportsman feature. Johnstown, N.Y. racer Brian Calabrese, who led in the early going, left the bottom groove open one time, and the young ‘budding’ star TVD made the move to pick up the victory in the 30-lap event worth more than $2,300.

Mexico, N.Y.’s Addison Bowman got to second, but Van Doren quickly put two lap cars between himself and Bowman to secure the victory. Bowman held on for second, with Kyle Smith, of Fleetwood, Pa., rounding out the podium. Payton Talbot, of South New Berlin, N.Y., came home fourth with Calabrese rounding out the top-five finishers.