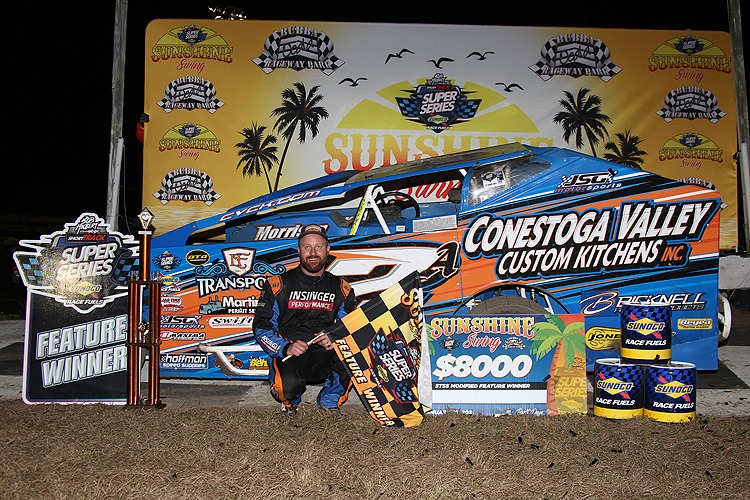 When starter Joe Kriss waved the Sunoco checkered flags, Boyertown, Pa.’s Mike Gular stood on top of the mountain after a 50-lap thriller on Saturday night. Gular claimed the win and the $8,000-plus victory in the Sunshine State.

The win was Gular’s second career STSS win and his first since October 2018. With the victory, Gular also became the first driver not named Friesen or Rudolph to win a ‘Sunshine Swing’ race, dating back to the ’20 inaugural swing.

A pair of ‘Outlaw Speedway’ cars led the field to green as Triangle, N.Y.’s Tyler Siri and Rochester, N.Y.’s Danny Johnson made up the front row. Siri quickly jumped out to the early lead and set the pace in the first several laps.

Unadilla, N.Y.’s Billy Decker was the man marching early, as he climbed from his fifth starting position to take the lead on lap 10.

Within the first 15 laps, the championship contenders reached the top-10, with Friesen beginning to march toward the lead cars. By this time, Gular had raced around Decker, and was setting the pace as the leaders closed in on lap traffic.

On lap 26, the race changed dramatically, as Gular and Friesen collided while for the lead. Friesen shot into the pit gate opening in the first turn before rolling over his No. 44. Fortunately, Friesen walked away uninjured. Gular remained the leader.

After a stretch of yellows, the last 16 laps produced a wild run to the finish. With Friesen’s car towed to the pits, Gular led through lap 31, with Decker taking over command on the 32nd lap.

Gular found the outside lane of the Ocala facility and swept back past Decker after a side-by-side battle on the 44th tour of the three-eighths-mile track and paced the remainder of the distance.

Rudolph made a late charge, taking over second spot in the late stages of the event. His run toward the front came up short with a runner-up finish but he earned the ‘Sunshine Swing’ championship including $500 from Precision Hydraulic & Oil, two free VAHLCO Wheels ($810 value) and a pair of Oakley Holbrook sunglasses courtesy of Design for Vision and Sunglass Central.

The veteran Decker drove his Jeremy Smith-owned No. 91 to third. Siri battled back for a fourth place finish and Savannah, N.Y.’s Matt Sheppard fought hard for a fifth-place finish.

Sicklerville, N.J.’s Stephen Kemery won the 30-lap feature and the championship for the Crate 602 Sportsman ‘Sunshine Swing.’ Kemery took advantage of his outside pole starting position to take the lead from the start and never relinquished it.

The race win was worth $2,350 and he received $500 from Precision Hydraulic & Oil, two VAHLCO Wheels ($810 value) and a pair of Oakley Holbrook sunglasses courtesy of Design for Vision and Sunglass Central.

Saturday’s event concluded the STSS ‘Sunshine Swing’ at Bubba Raceway Park. The series resumes with the Velocita-USA South Region opener at Del.’s Georgetown Speedway Friday-Saturday March 12-13 with the running of the annual Melvin L. Joseph Memorial. Both the STSS Modifieds and Crate 602 Sportsman will be in action among a number of divisions.