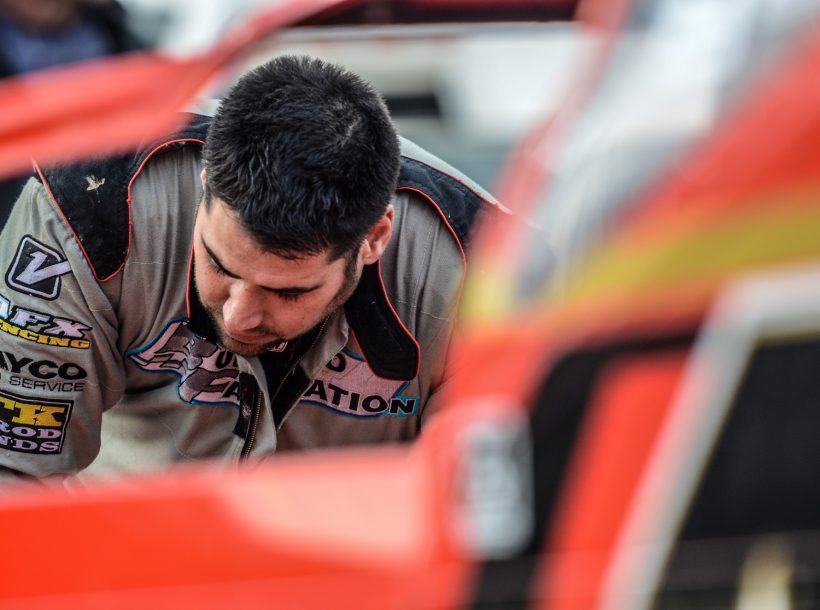 SAYREVILLE, NJ – Dominick Buffalino has been a mainstay in the Northeast dirt Modified world for over a decade.

The newly named wheelman of the Glenn and Bonita Hyneman-owned No. 126 car has run only a handful of STSS races since the series began in 2014. Now, the Buffalino-Hyneman team will chase the full STSS Velocita-USA South Region presented by Design for Vision and Sunglass Central along with select Hurlock Auto and Speed Supply North Region races throughout the year.

“Getting to race for Glenn, running the package we have put together, especially in the motor department, I’m excited to get to run the series fulltime,” Buffalino said while making final preparations to the Keystone Racing machines.

The Hyneman team carries four Bicknell racecars between Buffalino’s shop in New Jersey and Hyneman’s shop in Pennsylvania. The weekly car will remain at Buffalino’s shop, while Hyneman maintains the STSS fleet in the Keystone State.

Buffalino has always wanted to run the series for points, but never felt he had the equipment he needed to compete over the course of a full season with the STSS. That all changed when the phone rang, and it was Hyneman on the other end.

“The last time we talked, we had over 65 races on the schedule and we weren’t done yet,” he said.

The No. 126 team will be aggressive in attending races, but Buffalino was quick to point out running the STSS will be uncharted territory.

“I have only run the series races at my home tracks (in New Jersey at New Egypt Speedway and Bridgeport Motorsports Park) so I don’t have any expectations for how we’ll do on the series,” Buffalino admitted. “It’s going to be a different setup to the racecar. I’ll have to learn and get better over the season.”

Buffalino sat out the ‘Speed Showcase 200’ weekend last October at Port Royal (Pa.) Speedway due to a blown engine in his Todd Neiheiser-owned No. 2 but did attend ‘The Gobbler’ at the end of the 2020 season for his first race in the No. 126 car and brought home a respectable eighth-place finish at Georgetown (Del.) Speedway.

“I always thought I ran well in my stuff in the few series races I ran, so with better equipment, I don’t see why I can’t do better this time around.”

First up for the Buffalino-Hyneman combination will be the Melvin L. Joseph Memorial weekend the historic Georgetown Speedway on Friday, March 12 and Saturday, March 13.

The First State facility features both the Velocita-USA presented by Design for Vision and Sunglass Central South Region STSS Modifieds (49 laps, $10,049 to win) and Belmont’s Garage South Region Crate 602 Sportsman (25 laps, $1,549 to win) in points openers among a variety of divisions.

The complete Melvin L. Joseph Memorial weekend breakdown can be found at the following link: https://shorttracksuperseries.com/wp-content/uploads/2021/02/MelvinLJosephTimesPricingInformation2021.pdf