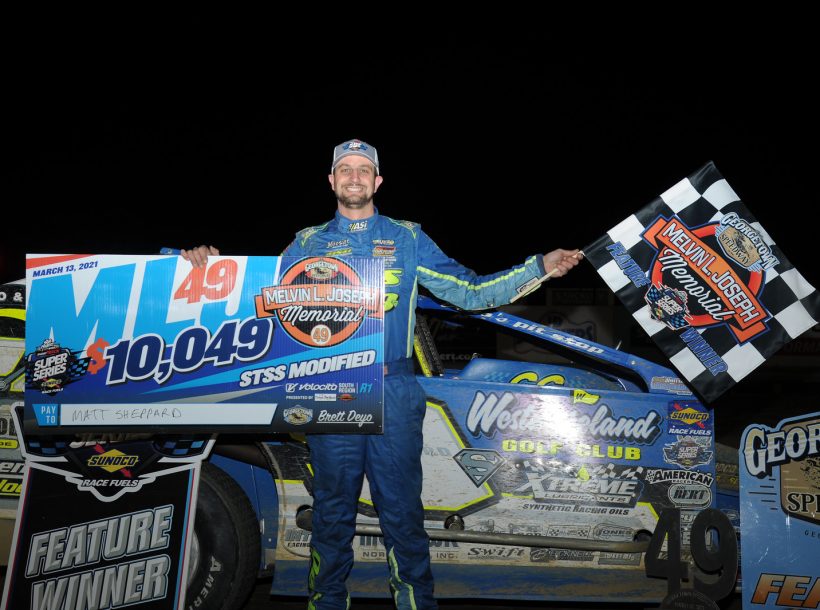 And the race lived up to the hype.

With the victory – his second at Georgetown with the series – Sheppard also kicked off his 2021 STSS South Region title bid in grand fashion.

‘Super Matt’ wheeled his Hurlock Auto Speed Supply No. 9s from the 19th starting position into second position. On a lap-28 restart, Sheppard used the outside line to drive around rival Stewart Friesen for a lead he would never relinquish.

A massive crowd attended the Saturday portion of the Melvin L. Joseph Memorial with 54 STSS Modifieds and 75 STSS Crate 602 Sportsman taking part in the lid-lifter among 164 total race cars on hand.

A pair of Empire State racers – Stewart Friesen and J.R. Heffner – led the field to Joe Kriss’ green flag for the 49-lap main event. After an early tangle in turn two when Heffner’s No. 74 spun in turn two, Mike Mahaney joined Friesen on the front row looking to avenge his Friday night near-miss.

Friesen appeared to be the class of the field, driving away from Mahaney until he reached the tail end of the field.

Mahaney quickly reeled back in Friesen’s Halmar International No. 44 but a yellow halted Mahaney’s charge and reset the field on lap 17.

While the Friesen/Mahaney battle was happening out front, Sheppard was becoming a factor. Sheppard had climbed from his 10th-row starting berth into the sixth position. Sheppard was utilizing the outside lane of the progressively banked half-mile oval to surge forward.

Sheppard capitalized on the 17th-lap restart to drive from sixth to third before quickly disposing of Mahaney for second and setting his sights on Friesen.

Sheppard chased Friesen until the 28th circuit, which proved to be the deciding factor in the race. Sheppard powered around the outside of Friesen and led the remainder of the distance, negotiating lapped traffic flawlessly.

Friesen, of Sprakers, N.Y., settled for a runner-up payday, with Mahaney of Kings Ferry, N.Y., capping a stellar weekend in the First State with another podium finish in third with the Adirondack Automotive No. 35 team.

Tyler Dippel of Wallkill, N.Y., drove the No. 1 Teo-Pro Car to a steady fourth-place effort and Anthony Perrego of Middletown, N.Y., completed the front-five in Brian Smith’s Superior Remodeling No. 44.

Potsdam, N.Y., driver Michael Maresca’s first STSS South Region start in the Gary Simpson-owned No. 12k brought a sixth-place finish to the team. H.J. Bunting of Milford, Del., grabbed a seventh-place finish to represent the First State in the Blades HVAC No. 65 after starting 21st via a consolation victory.

The win granted Potrzebowski a $1,549 payday for his efforts in the 25-lap main event. The race saw one yellow throughout, allowing lap traffic to become a factor. Potrzebowski was up to every challenge, holding on to grab the Sunoco checkered flags.

Todd Sammons won the 12-lap Season Opener for the Little Lincoln division. Sammons topped local favorite Kirk Lawson and M.J. White for the first checkered flag of the 2021 season. Sammons and Lawson thrilled the crowd with a side-by-side battle in the final circuits.

Jerry Hill, a consistent top-five finisher in the Delaware Super Truck division, got over the hump on Saturday with a win in the 12-lap main. The Smith brothers, David and Robert, chased Hill to the finish line in the weekend cap for the Super Trucks.

Georgetown Speedway is idle through Thursday, April 15 with the Mark ‘Coot’ Williams Super Late Model Memorial and RUSH Late Model ‘Battle of the Bay’ Speedweek event in a double-headline show.