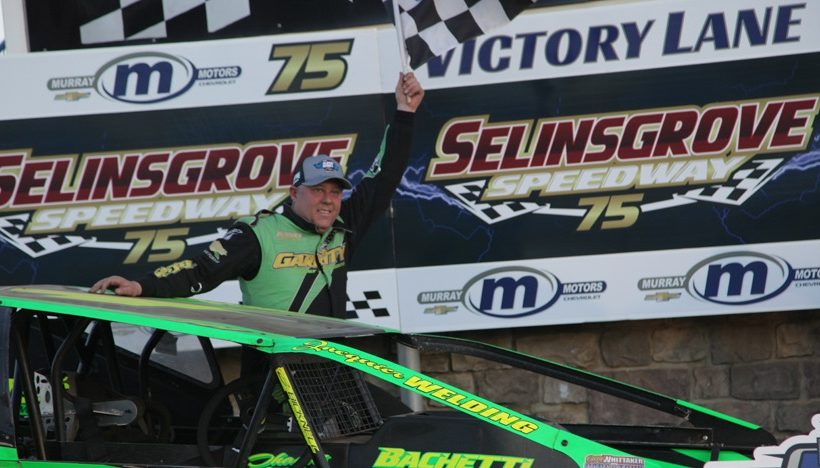 Saturday afternoon at Selinsgrove Speedway, that drought came to an end in the return of the ‘Icebreaker’ to the Snyder County oval.

Bachetti won the first-ever trip for the STSS to the Central Pennsylvania half-mile. It was also Bachetti’s first ever win on the Velocita-USA South Region presented by Design for Vision and Sunglass Central.

“We’ve struggled a lot lately, but this feels good. It’s good to run up front and have fun again,” said a relieved Bachetti in victory, accepting his $5,000-plus winner’s share.

Bachetti drew the pole in the Beyea Custom Headers Redraw and had Averill Park, N.Y.’s J.R. Heffner alongside him when the field came to Series Starter Joe Kriss’ green flag. It was Heffner who jumped out to the lead and led the opening eight laps before the first yellow of the race came out.

When the race went back to green, the race for third was the eye-catcher. Kyle Coffey was running the STSS “race of his life” as Series Announcer Jeff Ahlum proclaimed. Coffey was facing challenges from Anthony Perrego and Larry Wight.

The race went non-stop from the lap-six yellow through lap 34 of the 40-lap main event.

The battle up front began to intensify at the halfway mark. Heffner, who picked up the $100 Danny’s Pizza Pizzazz Halfway Leader bonus, was fading as the likes of Bachetti, Coffey, Perrego, and Wight were all rapidly catching Heffner’s back bumper.

It was Bachetti who was the first to strike, sliding underneath of Heffner and leading lap 23. Heffner’s fade continued, as each of the other top-five runners were able to get by Heffner before the lap-34 yellow.

Another yellow with two-laps to go gave the likes of Coffey, and Perrego an opportunity to take a swing at Bachetti, but the Bay State driver held on to get the monkey off his back, and return to STSS glory, the sixth win of his career.

Perrego, of Middletown, N.Y., took second away in the Brian Smith-owned No. 44 and Savannah, N.Y.’s Matt Sheppard followed him through in his Hurlock Auto & Speed No. 9s to grab a podium finish.

Larry Wight faded to sixth in his Gypsum Express No. 99L. Billy Pauch Jr. finished seventh in the Rick Holsten-owned No. 96. Tyler Dippel drove the Teo-Pro Car No. 1 to an eighth-place finish. Recently engaged Mike Mahaney came home ninth in his George Huttig-owned No. 35. Ryan Watt rounded out the top-10 in his home state, in the Ron Roberts-owned No. 14w.

For the second consecutive week, the STSS drew a stellar field of Modifieds, with 50 cars signing into the pit area.

The STSS Belmont’s Garage South Region Round No. 2 was won by Canadensis, Pa.’s Grant Hilfiger. It was Hilfiger’s second career STSS win, his first since the Sunshine Swing in 2020 at Florida’s All-Tech Raceway.

Hilfiger started on the pole of the 25-lap main event and led every lap of race that featured only one yellow, to collect the $1,600 payday.

An outstanding 57-car Crate 602 Sportsman field signed in for competition.