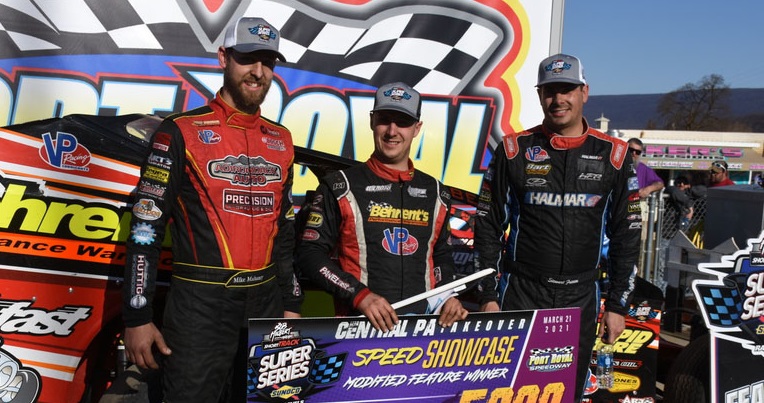 Williamson grabbed his second-career STSS victory, netting himself and the Behrent’s Performance Warehouse team the $5,000 payday.

While the payday was not as lucrative as Williamson’s $53,000 triumph at Port Royal last October, the win was the Canadian’s second consecutive top-five on the Velocita-USA South Region presented by Design for Vision and Sunglass Central. Williamson recorded a fourth-place finish the night before down Route 35 at Selinsgrove Speedway.

After the Beyea Custom Headers Redraw, it was the wife-and-husband pair of Jessica and Stewart Friesen making up the front row for the 40-lap main event. Stewart used the outside line to jump out to take the early advantage.

Williamson was not content to allow the Friesens to occupy the top-two spots for long. After starting in eighth, Williamson climbed to the runner-up spot in just four-and-a-half laps. His charge to catch Stewart, however, would take some more time.

Williamson was closing in on Friesen in slower traffic before a lap-17 yellow brought out by Anthony Perrego, whose Brian Smith-owned No. 44 slowed with a broken oil line.

When the field came back to the green flag, Mike Mahaney worked around Jessica Friesen to take the third spot, while Williamson continued to work within arm’s length of Stewart Friesen up front.

As the race went on, the track became bottom-dominant, and each of the top-three took turns trying to make the top side work to get around each other or lapped traffic.

On lap 30, Friesen’s bid to make the top side work cost him the race. Attempting to sweep around a slower car, Friesen left the bottom open for Williamson and ‘Money Mat’ filled the gap to take the lead away.

Mahaney became a major player with the top-two in lap traffic, charging to Friesen’s back bumper. Following a lap-32 double-file restart, Mahaney darted underneath Friesen and took the runner-up spot away.

The final eight laps spun off caution free, and Williamson held off any charges to grab another Port Royal Speedway victory. Williamson bested a 49-car field on his way to another STSS triumph in Central Pennsylvania.

Mahaney, of Kings Ferry, N.Y., held on for second in the George Huttig-owned No. 35. Mahaney has now taken over the STSS South Region points lead with three events complete.

Stewart Friesen of Sprakers, N.Y., rounded out the podium in his Halmar Racing No. 44. Jessica Friesen earned her best-career STSS finish coming home fourth in the One Zee Tees No. 1z. “Lightning” Larry Wight of Phoenix, N.Y., grabbed his second consecutive top-five the Gypsum Express No. 99L.

Wallkill, N.Y.’s Tyler Dippel continued his rock-solid start to 2021 with a sixth-place finish in the Teo-Pro Car No. 1. Seventh-place went to Neshanic Station, N.J.’s Matt Stangle in the family-owned No. 6 car. Mooresville, N.C.’s Max McLaughlin finished eighth in the Norm Hansell-owned No. 357 with Ryan Godown of Ringoes, N.J., coming home ninth in the R&M Motorsports No. 26. Unadilla, N.Y., native Billy Decker rounded out top-10 in the Smith Site Development No. 91.

The win made Williamson the sixth different winner in six events in 2021 on the STSS tour. Williamson joined the likes of Erick Rudolph, Stewart Friesen, Mike Gular, Matt Sheppard, and Andy Bachetti as the 2021 STSS winners thus far.

Up next, the STSS lays dormant until Tuesday, April 27 when the Hurlock Auto & Speed Supply ‘Diamond State 50’ takes place at Charlie Cathell’s Delaware International Speedway in Delmar, Del. Stay tuned to the series’ social media pages and website for updates.