A Win for Dad: Anthony Perrego Tops STSS Accord Battle of the Bullring Honoring His Father 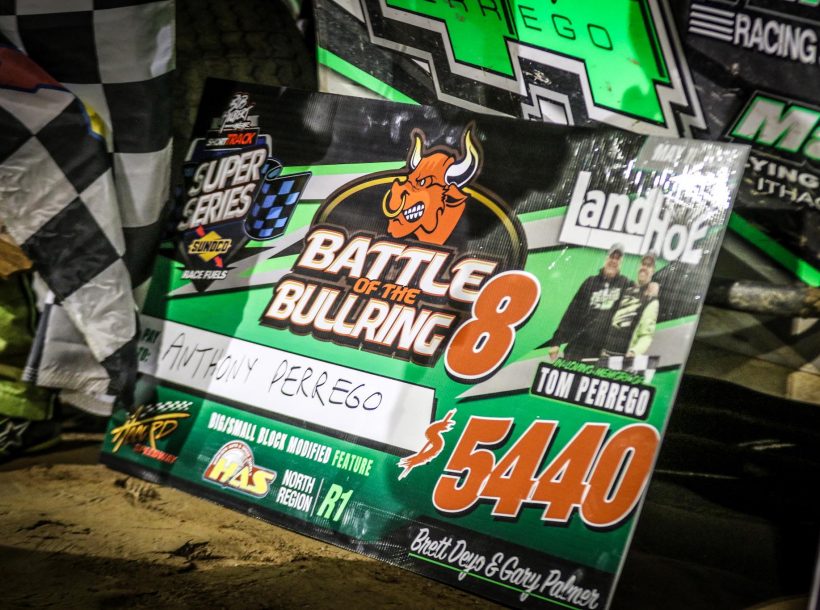 The Bob Hilbert Sportswear Short Track Super Series (STSS) Fueled By Sunoco honored the late Tom Perrego on Tuesday night at Accord Speedway with the ‘Battle of the Bullring 8’ presented by Land Hoe Maintenance.

After 50 ‘up-on-the-wheel’ laps around the quarter-mile oval, Middletown, N.Y.’s Anthony Perrego was standing in Victory Lane, holding the “big check” with an image of him and his father.

“Dad was definitely riding with me there at the end,” proclaimed an excited Perrego after his $5,440 payday driving the Brian Smith-owned Superior Remodeling No. 44.

The win for Perrego was his third in the ‘Battle of the Bullring’ event at Accord, joining conquests in 2017 and 2014. Perrego now owns seven STSS Modified victories in his career.

A field of 50 STSS Modifieds signed in at the Ulster County facility for the Hurlock Auto & Speed Supply North Region opener.

Shane Jablonka and Bobby Hackel occupied the front row after the Beyea Custom Headers redraw. Sheffield, Mass., star Andy Bachetti was scheduled for the outside pole, however a broken water pump sent him to a back-up car for the feature. Bachetti started at the tail of the field.

Wallkill, N.Y.’s Tyler Dippel was quickly on the move from his fourth starting position, driving to second in the opening four laps, and running down early leader Bobby Hackel, the Vermont driver who plans to chase STSS North Region points in 2021.

After a lap-four restart, Dippel used the bottom lane to take the lead away and paced a large portion of the event in the Bill Pascual-fielded No. 3. The race behind Dippel was where the action was happening.

Hackel, Jablonka and Scott Ferrier were in a heated battle for second, while a host of others battled at the back half of the top-10.

Following a lap-23 yellow, a long green-flag run played into the hands of Perrego and Canadian Mat Williamson. Slower traffic slowed Dippel’s pace and the remainder of the top-five began closed in.

On lap 42, Jablonka sensed an opportunity as he and Perrego caught Dippel. Jablonka drove hard into turn three but unfortunately tangled with a lapped car and spun, ending his chance at an upset victory.

Perrego lined up next to Dippel on the restart with Williamson in tow.

When starter Joe Kriss waved the green flag, Perrego cleared Dippel for a lead he would not relinquish.

“A lot of experience here at Accord Speedway was the key to that restart,” Perrego said. “Tyler (Dippel) spun the tires a little bit and I was able to get a nose ahead of him into one.”

Despite a pair of restarts in the final eight laps, Williamson could not make the final pass, ending up second in his Behrent’s Performance Warehouse-owned No. 3.

“If I were ever happy to be second, I’m glad it was to Anthony tonight with this race in honor of his Dad,” Williamson said.

King Ferry, N.Y.’s Mike Mahaney spent the entire race near the top-five, coming to life late to grab another STSS podium finish in his George Huttig-owned No. 35. Dippel faded late but held on for a fourth-place finish, with Bloomingburg, N.Y.’s Scott Ferrier recording a fifth-place finish.

Boyertown, Pa.’s Jeff Strunk brought his David Zubikowski-owned No. 88z home with a sixth-place finish while fellow Pennsylvania driver Mike Gular chased him in seventh aboard the Terry Fasnacht No. 2A. Savannah, N.Y.’s Matt Sheppard was the Smith Site Development $300 Hard Charger, finishing eighth in Derrick McGrew Jr.’s No. 26 after his No. 9S suffered a rocker arm issue during qualifying. Bachetti rallied for ninth in his back-up car, with Billy Decker of Unadilla, N.Y., completing the top-10 after starting 17th.

The win netted Bruning a $1,500-plus payday and his first career STSS points-paying victory. Bruning led laps four through six but relinquished the lead on a restart. Bruning held second for the remaining 19 laps and it was all he had to do as a result.

A healthy field of 36 STSS Crate 602 Sportsman took part in the program.

BULLRING BITS: Despite a cool and windy evening, a healthy crowd attended the first complete program at Gary and Donna Palmer’s facility since the 2019 edition of the post-season ‘Gobbler’ event. The speedway did not host any racing in 2020 due to COVID restrictions….

A grinding turn-one incident during a heat-race pileup eliminated all-time STSS winner Stewart Friesen for the night with heavy front-end damage to the Halmar International No. 44….

A race information sheet has been posted on the STSS website: https://shorttracksuperseries.com/wp-content/uploads/2021/04/OutlawShowdownInformationSheet.pdf

LAND HOE MAINTENANCE ‘BATTLE OF THE BULLRING 8’ RESULTS SUMMARY – ACCORD SPEEDWAY MAY 11, 2021

Did Not Start: Jeff Tubbs.