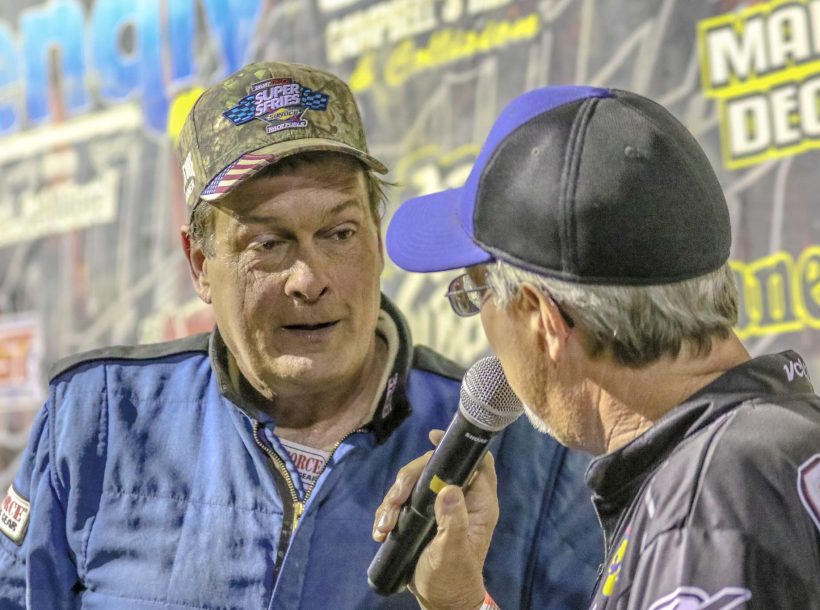 With a huge roar from the partisan crowd, Paine became the 32nd different winner in the history of the Bob Hilbert Sportswear Short Track Super Series (STSS) Fueled By Sunoco at Outlaw Speedway.

“I’ve never had a car that good on a track like that,” the veteran explained in Victory Lane at the Finger Lakes venue he once dominated.

“This is a tough field, and to come out on top? I’m shocked.”

The Waterloo, N.Y. resident led all 50 laps en route to a $5,250 payday as the winner of the ‘Outlaw Showdown’ special. Paine became the eighth different winner of the season with the Short Track Super Series.

Despite challenges from Anthony Perrego and Mike Mahaney, Paine defended his home track and thrilled the Outlaw faithful with his first career STSS triumph.

At the drop of series starter Joe Kriss’ green flag, Paine raced out to an early advantage, while Rudolph fought for second with Middletown, N.Y.’s Perrego.

Rudolph’s fight would not last long, as Perrego utilized the bottom to slide underneath Rudolph to grab the runner-up position. Matt Sheppard worked the topside of the speedway to race around a fading Rudolph before a lap-six yellow brought the field back together. That was ultimately the only caution of the event.

The final 44 laps went non-stop at the four-tenths-mile oval and led the leaders deep into slower traffic.

On the restart, Paine quickly jumped out to the advantage, while Perrego and Sheppard struggled to keep pace.

Paine grabbed the $200 Superior Remodeling Halfway Leader bonus. In the meantime, Perrego and Sheppard dueled for second, with Mike Mahaney closing in.

The battle up front intensified by lap 40. With Paine and Perrego nose-to-tail in lap traffic, Mahaney and Sheppard had reeled the two in, suddenly making it a four-car war for the top spot.

Sprakers, N.Y.’s Stewart Friesen would not go away quietly, as he threw his hat in the ring, and began pressuring Sheppard for fourth on lap 44.  It was now a five-car battle for the win.

The leaders fanned out three-wide on the white flag lap with Paine, Perrego and Mahaney tussling for real estate as Friesen continued to build momentum up top.

Ultimately, Paine streaked across the stripe to win by less than a car-length.

King Ferry, N.Y., resident Mahaney stole second in the race’s final moments with the George Huttig-owned No. 35 with Perrego completed the podium in the Superior Remodeling No. 44 fielded by Brian Smith.

Stewart Friesen of Sprakers, N.Y., completed his late charge in fourth with the Halmar International No. 44 after starting eighth and Sheppard, of Savannah, N.Y., filled out the front five in the Hurlock Auto & Speed No. 9s.

Sheffield, Mass., resident Andy Bachetti continued his solid efforts in 2021, finishing sixth, ahead of Alan Johnson of Middlesex, N.Y., in the Mark Spoor-owned No. 14J, Ransomville, N.Y.’s Rudolph, Bobby Varin of Sharon Springs, N.Y., in the Siri Racing No. 28 and Mat Williamson driving the Behrent’s Performance Warehouse No. 3, up from 18th.

FINGER LAKES FACTS: After losing an engine approaching the checkered flag in his heat race, Tyler Dippel hopped into the Joe Beyea No. 121 for the 50-lap main event. Pat Ward was the driver of the Beyea ride for the night but failed to qualify, turning over the ride to Dippel…

The podium run by Anthony Perrego was by far his best performance at the Dundee oval, where he struggled in prior appearances…

The STSS Modified feature took the checkered flag at  a respectable 9:38 p.m. on a weeknight…

After hauler issues kept the car away from the series North Region opener, the Norm Hansell No. 357 was in the pit area at Outlaw for driver Max McLaughlin, who finished 12th…

Rocky Warner qualified for the main event but did not take the green in the Jason Simmons No. 98 when the car failed to fire in the pit area…

Next up for the STSS are a pair of events next week. On Tuesday (May 25) the Velocita-USA South Region presented by Design for Vision and Sunglass Central hits New Egypt (N.J.) Speedway with the ‘Dirty Jersey’ featuring the STSS Modifieds (50 laps, $5,000 to win) and STSS Crate 602 Sportsman Belmont’s Garage South Region (25 laps, $1,500 to win).

Did Not Start: Rocky Warner