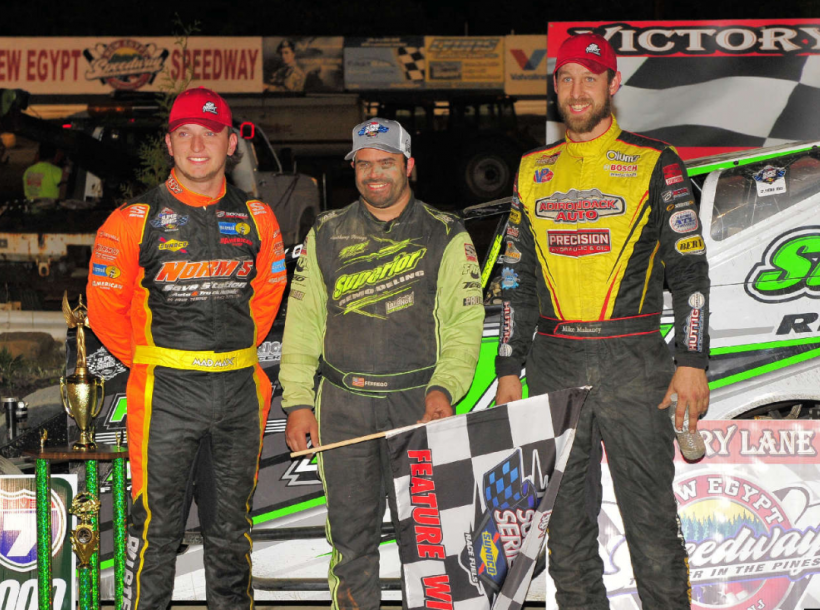 The driver of the Brian Smith-owned No. 44 also became only the second driver to claim multiple STSS victories on the 2021 campaign thus far.

McLaughlin – driving Norm Hansell’s No. 357 – outgunned the New Egypt point leader Grosso on the initial start to pace the field in the early going.

Following a few early yellows, Anthony Perrego did not appear to have a winning racecar. After starting in fifth, Perrego fell to eighth and was under fire from Billy Pauch Jr.

Following a lap-nine yellow for a flat tire on Frank Cozze’s Dave Renaldo-owned No. 401, the field settled into a green flag rhythm and Perrego began to march forward.

By lap 20, Perrego had made his way to third, while Mahaney and McLaughlin were catching lap traffic. Just as they entered traffic at the halfway point, the 16-lap green flag run came to an end as Richie Pratt Jr. slowed to bring out the yellow.

While the top-three continued to pace the field, Stewart Friesen had risen to the top-10 from his 21st starting position and was continuing his charge.

While Friesen continued his march to the front, the top-three had once again caught slower traffic; this time, with just 10 laps to go.

McLaughlin struggled to make the top side work, allowing Mahaney to slip underneath. As the two went side-by-side, Perrego saw an opportunity.

Perrego followed McLaughlin on the top side, as McLaughlin cleared Mahaney, Perrego quickly switched to the bottom, getting around Mahaney and underneath McLaughlin.

The two went door-to-door into turns three and four, but Perrego’s momentum carried him to the lead.

From there, Perrego set sail, racing underneath the Sunoco checkered flags to land his second STSS victory in two weeks, and the first-ever New Egypt win.

Mahaney worked by McLaughlin in the closing laps, coming home with another STSS second place finish in his George Huttig owned No. 35. McLaughlin, of Mooresville, N.C., held on for third.

Billy Pauch Jr. of Milford, N.J., fought hard for a sixth-place finish in the Rick Holsten-owned No. 96 with Boyertown, Pa.’s Jeff Strunk chasing Pauch Jr. to the line the Zubi’s Racing No. 88z. Mike Gular, also of Boyertown, Pa., brought the Terry Fasnacht-owned No. 2A home eighth. Savannah, N.Y.’s Matt Sheppard placed ninth in the Hurlock Auto & Speed No. 9s and Ryan Krachun of Branchburg, N.J., rounded out the top-10.

Thirty-seven STSS Modifieds signed in for the first series event at New Egypt since 2019.

Bangs earned $1,500 for his efforts and became the 39th different winner in 54 STSS Crate 602 Sportsman events.

A stout field of 38 STSS Crate 602 Sportsman took part in the program.

Max McLaughlin relied on YouTube videos to get a feel for the speedway before making his New Egypt debut on Tuesday. McLaughlin was a quick study, winning his heat race….

The STSS Modified main event was completed just after 9:30 p.m. for the third consecutive Tuesday night….

Racing resumes for the STSS this Sunday, May 30 at Penn Can Speedway in Susquehanna, Pa., with the ‘Clash at the Can’ serving as Race No. 3 of the Hurlock Auto & Speed Supply North Region for the Modifieds.

Complete race information can be found at the following link: http://shorttracksuperseries.com/wp-content/uploads/2021/05/DirtyJersey7GeneralInformationSheet.pdf

Did Not Start: Ryan Krushinski