Like He Never Left: Matt Sheppard Back On Top of STSS Tuesday at Penn Can Speedway 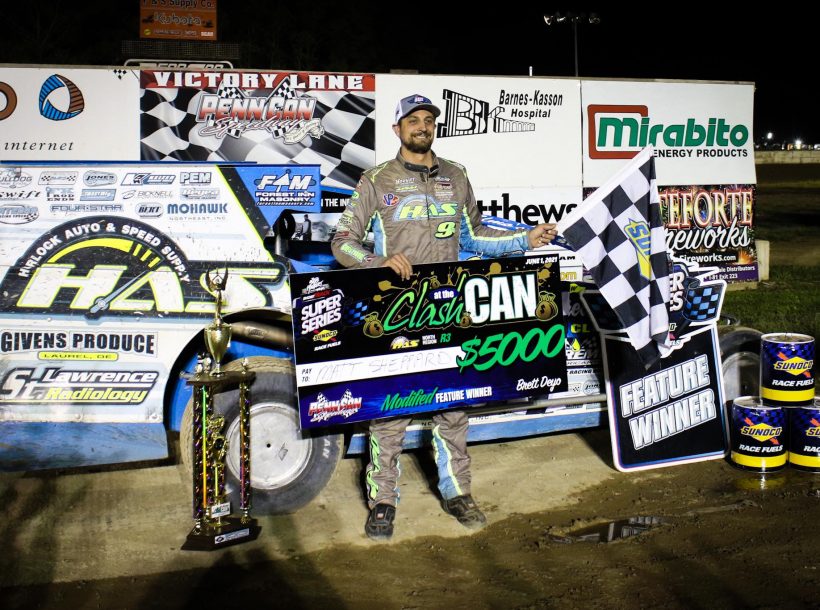 To most, winning a second time on the Bob Hilbert Sportswear Short Track Super Series (STSS) Fueled By Sunoco in a season would signal a team clicking on all cylinders. Savannah, N.Y.’s Matt Sheppard sets a different bar for himself and his team.

“We’ve struggled a little bit this season, hopefully this is a sign we are starting to turn things around and we can start beating Stewart (Friesen) instead of chasing him around,” explained a satisfied Sheppard in Victory Lane at Penn Can Speedway Tuesday night.

Sheppard entered Round No. 3 of the Hurlock Auto & Speed North Region fourth in points and 42 points out of first. After picking up the win worth $5,200, Sheppard has vaulted himself right back into contention at the top of the STSS North Region standings.

Billy Decker and Stewart Friesen occupied the front row after the Beyea Custom Headers redraw for the 50-lap ‘Clash at the Can.’ Sheppard rolled off from the seventh position, just as he did in his heat race.

Friesen rolled off the top side at the drop of series starter Joe Kriss’ green flag and quickly grabbed the early advantage. Sheppard was wasting no time, driving from seventh to second in just five laps.

“The car was really fast from the time we unloaded it tonight. I decided after the heat race to just leave it alone, and I’m glad we did… it made my job really easy tonight,” Sheppard proclaimed of his Hurlock Auto & Speed No. 9s.

‘Super’ Matt Sheppard was not done, quickly closing Friesen’s eight car-length advantage, and challenging for the lead on lap eight. Friesen’s fight was minimal, as Sheppard used the outside to lead lap nine.

One lap later, as the leaders closed in on lapped traffic and Eric Leet spun at the back of the field right in front of Sheppard and Friesen. Both narrowly escaped heartbreak and went back to battling for the lead when the field went back to racing.

Sheppard continued to pace the field on his way to grabbing the $200 Superior Remodeling Halfway Leader bonus.

The halfway point also marked when Sheffield, Mass., native Andy Bachetti’s march to the front became apparent. After coming from the consolation race, Bachetti had marched from 21st to 11th and was nowhere near done.

Bachetti, the 2020 runner-up at the ‘King of the Can’ STSS race, was into the top-10 by lap 30 and ultimately raced his way to fourth, earning the $500 Land Hoe Maintenance LLC Hard Charger Award.

Despite multiple bouts with slower traffic, Sheppard never faced any real threats for the win, despite multiple restarts with Friesen alongside of him. The win was the 17th of Sheppard’s STSS career, and his first since the Melvin L. Joseph Memorial at Georgetown (Del.) Speedway in March.

Despite left-rear suspension damage, Friesen, of Sprakers, N.Y., carried the Halmar International No. 44 to a runner-up finish, and Owego, N.Y.’s Byron Worthing grabbed a career best third-place run with the STSS.

Bachetti ended his drive in fourth and Mike Gular of Boyertown, Pa., rounded out the top-five in his Terry Fasnacht-owned No. 2A.

Mike Mahaney of King Ferry, N.Y. continued his consistency, finishing sixth in the George Huttig-owned No. 35. Middletown, N.Y.’s Anthony Perrego brought the Brian Smith-owned No. 44 home in seventh, maintaining his strong 2021 on the STSS. East Greenbush, N.Y.’s David Schilling continues his improvement on the STSS tour, finishing eighth in his family-owned No. 20. Brett Haas of Pittsfield, Mass., came home ninth in the Dave Prime No. 55 and Nick Petrilak of Greenfield, Pa. rounded out the top-10.

Heat winners, receiving $50 each from FloRacing, were Billy Decker, Friesen, Darwin Greene, Worthing and J.R. Hurlburt. The consolations were split by Bachetti and Haas.

CAN QUIPS: Despite the rain date following precipitation on Sunday, a field of 43 STSS Modifieds registered for the Tuesday night event, with five heat races and a pair of consolations starting the 27-car feature starting field….

A top-10 effort for Penn Can regular Brian Malcolm ended late in the distance with a broken shock, sending the Chuck Grimm-owned No. 119 to the infield….

Danny Creeden had a redraw position locked up during his heat race only to suffer a right-rear flat tire on the final lap. Creeden ultimately was unable to qualify for the main event….

Tyler Dippel took a provisional start after battling an apparent misfire in the Bill Pascual-owned No. 3 and was an early retiree from the feature….

Racing resumes next Tuesday, June 8 at Big Diamond Speedway in Minersville, Pa., when the STSS Hurlock Auto & Speed North Region and Velocita-USA South Region presented by Design for Vision and Sunglass Central meet for the annual “Civil War” North vs. South program in Coal Country. Modifieds race for $5,000 to win, $1,000 for 10th and $400 to start plus bonuses and special awards. Crate 602 Sportsman battle in a Belmont’s Garage South Region program offering $1,500 to win.

The general information sheet has been posted on the STSS website: https://shorttracksuperseries.com/wp-content/uploads/2021/05/AnthraciteAssaultRaceInformationSheet.pdf