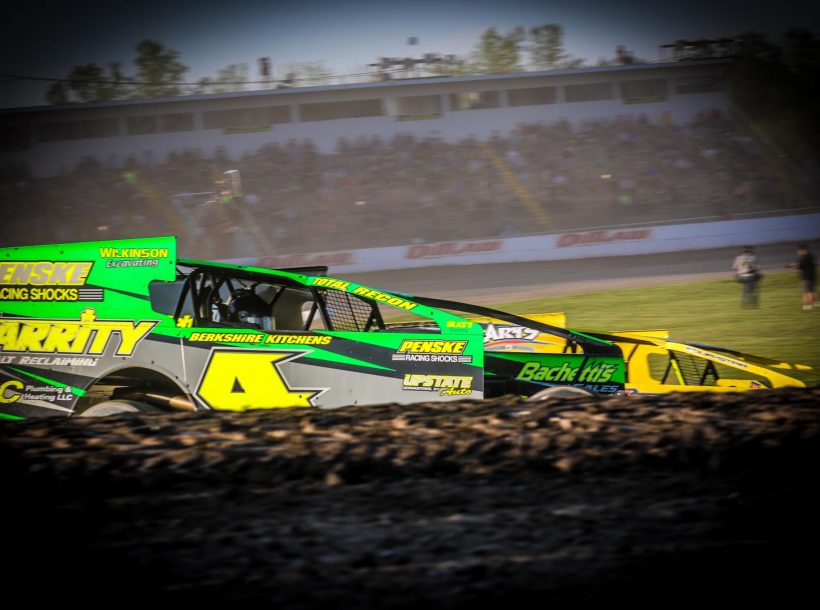 MILLSBORO, DE – The calm before the storm.

The Bob Hilbert Sportswear Short Track Super Series (STSS) Fueled By Sunoco is dormant for now before kicking off a busy month of July full of new ventures.

It all begins on Independence Day (Sunday, July 4) at Fonda (N.Y.) Speedway for the third annual running of the Fuccillo Autoplex of Nelliston ‘Firecracker 50.’  The 50-lap main event will pay a minimum $10,000-to-win and $400-to-start at the ‘Track of Champions.’

On Wednesday, July 14, the STSS takes part in the inaugural season at the Bloomsburg (Pa.) Fair Raceway in the ‘Battle at Bloomsburg’ in Round No. 5 of the chase for the Hurlock Auto & Speed $12,000 North Region championship.

The race is scheduled for 50-laps, $5,000-to-win at the all-new bullring on the Bloomsburg Fairgrounds.

Eight days later, the second new facility, N.Y.’s Utica-Rome Speedway, takes center stage on the STSS Tour. On Thursday, July 22, the STSS big-block/small-block Modifieds take on the half-mile ‘Home of Heroes’ in the ‘Richie Evans Remembered 61.’ The Modifieds will race 61 laps with $6,100 reserved for the winner. A hefty $610 will be paid just to take the green flag.

Round No. 6 of the Hurlock Auto & Speed North Region brings the STSS to its fourth brand new facility of the 2021 season, dating back to the Sunshine Swing at Bubba Raceway Park in Ocala, Fla.

The STSS rounds out July at the newly configured Bridgeport (N.J.) Motorsports Park on Tuesday, July 27. The trip will mark the third different configuration the STSS has run at Bridgeport, previously having run on the five-eighths and three-eighths mile racetracks.

Now the STSS heads to the high-banked, four-tenths mile for the first time after losing the 2020 scheduled event due to COVID-19.

The ‘South Jersey Shootout’ will be Round No. 6 of the Velocita-USA South Region presented by Design for Vision and Sunglass Central $10,000 championship chase.

The Precision Hydraulic & Oil North Region Crate 602 Sportsman will join the STSS Modifieds at Fonda, Bloomsburg and Utica-Rome throughout the month of July.

The Belmont’s Garage South Region Crate 602 Sportsman are on the card for the ‘South Jersey Shootout’ at Bridgeport, as well.

All four events will be streamed live on FloRacing (www.floracing.tv).