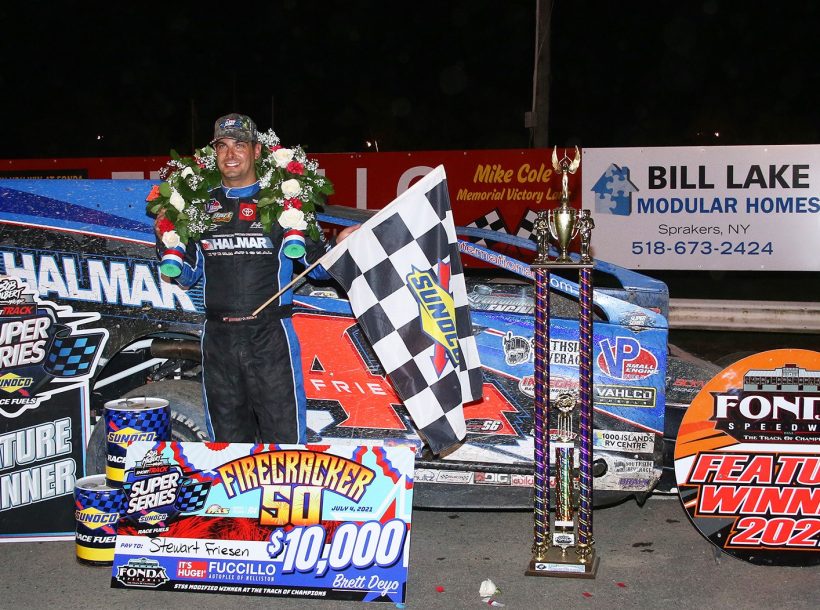 Friesen furthered his title as the winningest driver in the history of the Bob Hilbert Sportswear Short Track Super Series (STSS) Fueled By Sunoco. The $10,000-plus victory marked his 29th career STSS victory.

The win pulled Friesen closer to the top of the STSS Hurlock Auto & Speed North Region standings as well, after his rough start at Accord (N.Y.) Speedway in May.

“This is one of our biggest races of the year and we try really hard for this one; just a great racecar tonight,” proclaimed Friesen in Victory Lane.

“We tweaked at it all night, and we freed it up just enough that we just rolled well through the corners.”

At the drop of STSS starter Joe Kriss’ green flag, it was Sheppard who quickly darted out to the early lead, setting a torrid pace for the rest of the field to maintain.

By lap six, Sheppard had caught lap traffic, allowing Warner to close in, while Friesen fought tooth-and-nail for third with King Ferry, N.Y., native Mike Mahaney. Mahaney’s bid was cut short however, as he brought out the yellow for a flat tire, bunching the field back together.

Following Mahaney’s issue, a series of cautions ensued, which was all Friesen needed to advance to the lead. On the lap-six restart, Friesen raced to the inside of Warner to take second away before another yellow flew for Mooresville, N.C.’s Max McLaughlin, who suffered a right-rear flat tire on the Norm Hansell No. 357.

The lap-seven restart saw Sheppard and Friesen on the front row. Sheppard chose the outside, giving Friesen the bottom. The two went side-by-side into turn one, and Friesen executed a perfect slide job, putting his Halmar International No. 44 to the front of the field.

While Friesen paced the field, Decker, who had risen to fourth before fading on a restart following contact with the turn-one wall, was driving back forward. He joined Mike Gular of Boyertown, Pa., and East Greenbush, N.Y.’s David Schilling in a battle for a top five spot.

Schilling, however, would join Mahaney and Alan Johnson as drivers racing in the top five, encountering trouble. Schilling’s misfortune put Decker back into the fourth spot on lap 14.

The race saw its first long green-flag run following the lap-14 yellow, and on lap 31, Schilling was involved again, this time as a lap car with now second-place running Warner. Warner went off on a tow truck, ending his bid at grabbing his first career STSS triumph.

One more yellow on lap 41 gave Sheppard and Decker one more chance, but Friesen’s dominance at the Track of Champions was not to be denied. Friesen led the final 43 laps, comfortably claiming his third consecutive ‘Firecracker 50.’

Decker, of Sidney, N.Y., piloted his Jeremy Smith-owned No. 91 to a runner-up finish, while Sheppard rounded out the podium in his Hurlock Auto & Speed No. 9s. Ontario’s Mat Williamson climbed from 17th to fourth in the Behrent’s Performance Warehouse No. 3 and Gular rounded out the top-five in the Terry Fasnacht-owned No. 2A.

Heat winners, receiving $50 each from FloRacing were Craig Hanson, Adam McAuliffe, Decker and Mahaney. The consolation races went to Yankowski and Perrego.

The Crate 602 Sportsman took part Round No. 2 of the Precision Hydraulic & Oil North Region on Sunday night.

Clark drew the pole in the Beyea Custom Headers redraw and went wire-to-wire to claim the victory. The victory earned Clark $2,000, one of the largest winner’s shares for the STSS Crate 602 Sportsman of the season.

Gloversville, N.Y.’s Chad Edwards snatched the runner-up spot in his Kollar Motorsports 10% car on the final lap from Mark Mortensen, who settled for third. Tanner Warner and Tim Hartman Jr., who started 21st on the grid.

FIRECRACKER FODDER: A massive crowd took in the third running of the ‘Firecracker’ event with 90 cars filling the pit area in just two divisions. The 50/50 winner took home a massive $6,423….

Third-place finisher Matt Sheppard elected not to utilize sail panels after struggling with sail panels at Fonda Speedway in the past….

Majestic Fireworks put on a huge display at the conclusion of the night’s racing….

This event marks the first-ever events for both the Modified and Crate 602 Sportsman divisions on the recently built oval on the Bloomsburg Fairgrounds.

A complete information sheet has been posted for this event on the STSS website: https://shorttracksuperseries.com/wp-content/uploads/2021/06/BattleatBloomsburgGeneralInfoSheet.pdf