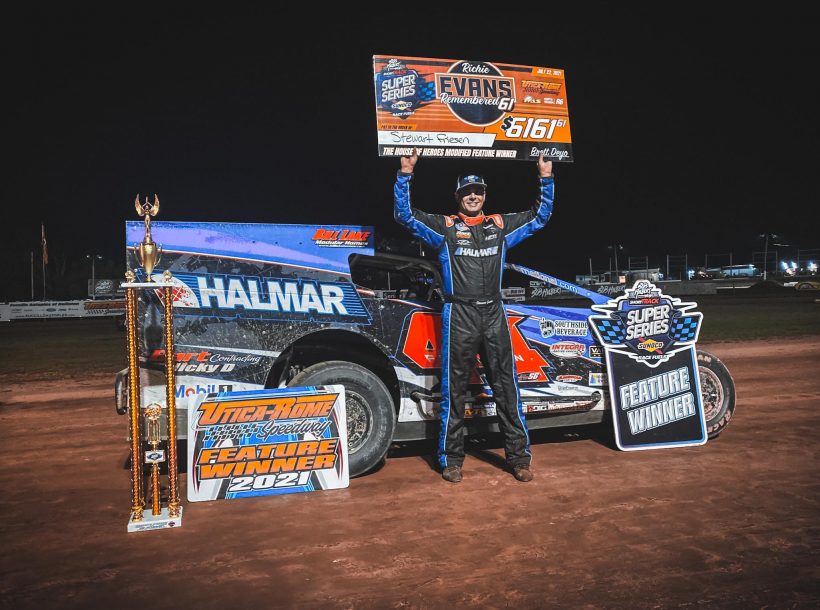 That was the sound as the green flag fell and Sprakers, N.Y.’s Stewart Friesen and Savannah, N.Y.’s Matt Sheppard began a 61-lap heavyweight bout.

In the end, Friesen captured the first ever trip for the Bob Hilbert Sportswear Short Track Super Series (STSS) Fueled By Sunoco to Utica-Rome Speedway in the ‘Richie Evans Remembered 61.’

“I was worried, starting up front, somebody behind you can find something and run you down. But Matt (Sheppard) started up front with me, so I knew we’d be searching together,” explained Friesen in Victory Lane.

Friesen’s win pocketed him $6,161.61-plus and extended his record as the all-time winningest driver on the STSS. Friesen, who entered the night fourth in Hurlock Auto & Speed North Region point standings, drew closer to the point lead as well.

Following the Beyea Custom Headers Redraw, Sheppard and Friesen occupied the front row, and the battle was on. The two sit atop the Utica-Rome all-time win list and the STSS all-time win list.

At the drop of series starter Joe Kriss’ green flag, Friesen jumped off the outside and darted to the lead, before a yellow on lap one for Billy Van Pelt facing the wrong direction in turn two.

A few laps later, Johnson continued to work forward, reeling in and slipping by Mahaney on lap 23 and taking the third position.

Friesen and Sheppard continued to knife through lap traffic, lapping into the top-10 before a lap-37 yellow came out for fourth place running Mike Mahaney breaking on the front stretch.

After another yellow on lap 38, the green flag fell for the final time and Friesen went right back to work. Sheppard tried the top and bottom in each corner, but Friesen’s No. 44 was too strong.

While Friesen led Sheppard, Johnstown, N.Y.’s Rocky Warner came to life, climbing to the third position all by himself. While Warner camped out in third, Alan Johnson battled with Jessica Friesen, Mat Williamson, and Anthony Perrego for the fourth spot.

In the end, Friesen never made the mistake Sheppard needed, capturing the historic event at the ‘Home of Heroes.’

Matt Sheppard finished in the runner-up spot in his Hurlock Auto & Speed No. 9s, and Rocky Warner rounded out the podium finishers in the Jason Simmons Racing No. 98.

Ninth was Ransomville, N.Y.’s Erick Rudolph in the Revive Spine Center no. 25 and Montezuma, N.Y.’s Dave Marcuccilli rounded out the top-10.

Thirty-nine STSS big-block/small-block Modifieds signed in at the gate to participate in the first-ever Modified race at Utica-Rome Speedway.

Fifty-one Crate 602 Sportsman registered for Round No. 4 of the Precision Hydraulic & Oil North Region.

Talbot chased Niskayuna, N.Y.’s Tim Hartman Jr. for the first 17 laps of the feature, as the top two in series points were duking it out for the win.

Hartman Jr. stayed down on the bottom, while Talbot rolled the top side in turns three and four reeling in Hartman lap-by-lap. On lap 18, Talbot had caught Hartman and rolled around Hartman to take the lead for good.

The win, his second of the season at Utica-Rome, earned Talbot $1,561 for his efforts, and pulled him within four points of Hartman for the STSS North Region point lead.