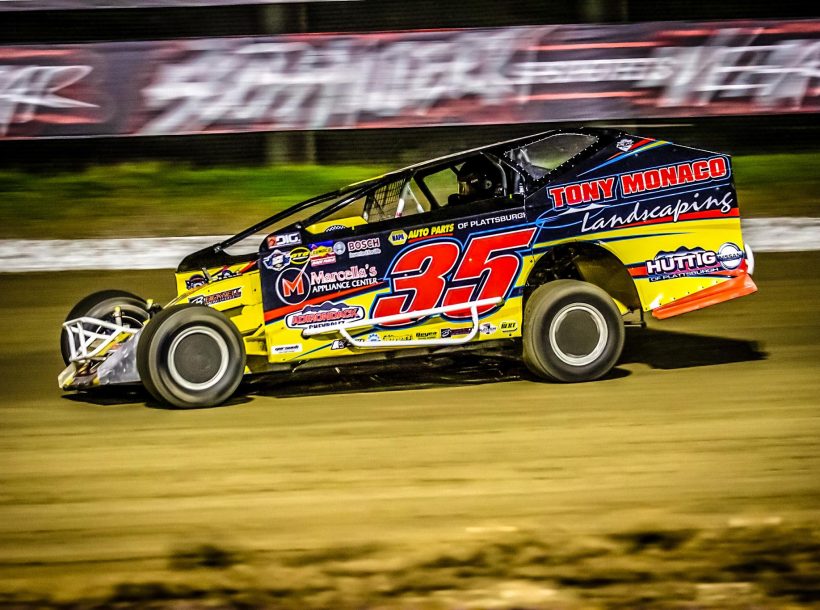 That’s how long it has been since the Bob Hilbert Sportswear Short Track Super Series (STSS) Fueled By Sunoco completed a Velocita-USA South Region event presented by Design for Vision and Sunglass Central.

Tuesday, May 25 was the last time the South Region was in action, as Middletown, N.Y.’s Anthony Perrego captured the ‘Dirty Jersey 7’ at New Egypt (N.J.) Speedway.

This Tuesday, July 27 the STSS heads back to the Garden State for the ‘South Jersey Shootout’ at Bridgeport Motorsports Park.

The reconfigured four-tenths-mile oval hosts Round No. 6 of the Velocita-USA South Region presented by Design for Vision and Sunglass Central in the series’ first appearance at the high-banked ‘Kingdom of Speed.’

King Ferry, N.Y., star Mike Mahaney finds himself atop the South Region standings, 35 markers ahead of second. Despite not winning yet on the STSS Tour, Mahaney’s consistency has been tough to top halfway thru the South Region schedule.

Coming off the win two months ago, Perrego is the man chasing Mahaney into Bridgeport. Perrego has finished in the top-five in four of the five South Region events. His lone blemish came from a broken water pump at the ‘Speed Showcase 40’ at Port Royal (Pa.) Speedway.

‘Super’ Matt Sheppard has risen to third in the South Region standings. After winning the opening Melvin L. Joseph Memorial in March, Sheppard’s pace had slipped a little in South Region events. On a recent hot streak, the Savannah, N.Y., driver will look to continue his momentum heading to Bridgeport.

Sprakers, N.Y.’s Stewart Friesen, sitting 70 points out of first,heads to Bridgeport as the only driver in the top five in STSS South Region standings as a winner on the newly configured four-tenths-mile.

Wallkill, N.Y.’s Tyler Dippel has been another model of consistency on the South Region, having finished in the top-10 in four of the five South Region races thus far. Dippel sits fifth in points, 91 markers behind Mahaney.

The STSS Crate 602 Sportsman will also be in action, running Round No. 5 of the Belmont’s Garage South Region.

Complete Modified South Region Standings can be found at: https://stss.racestatcentral.com/standings.php?IDseries=2&IDseason=2021

A complete information sheet has been posted for the ‘South Jersey Shootout’ on the STSS website: http://shorttracksuperseries.com/wp-content/uploads/2021/07/SJShootoutGeneralInfoSheet.pdf